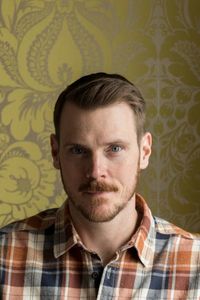 Andrew Forbes' Lands and Forests (Invisible Publishing) is a gift to short fiction lovers - a spare, smart, thoughtful collection that feels like a gritty Alice Munro descendant peeling back the ordinary lives of its characters: their disappointments, hidden longings, and deeply rued mistakes. Like the title promises, the land is ever present, containing its own threats, needs, and character.

Forbes is familiar to readers from his previous, award-nominated collection What You Need and his popular collection of baseball-inspired essays, The Utility of Boredom.

We're very excited to welcome Andrew to Open Book today to talk about his collection and especially its title, itself inspired by a defunct government title. He talks to us about the power of titles in general as part of our Entitled interview series.

We hear from Andrew about how a title, once chosen, begins to shape the book it's attached to; the '70s classic that inspired a past title of his (it'll be stuck in your head!); and the not-so-nice review of one of his titles that he accepts with pride.

It's a collection of short stories called Lands and Forests. The name derives from the Department of Lands and Forests, the old name for the Ontario Ministry of Natural Resources and Forestry, which features explicitly in two of the book's twelve stories. I liked the words, too, as the natural world both haunts and is haunted by the characters therein. It was a short, declarative, but also descriptive title, and once I hit on it I became nervous that someone else would discover my secret and steal it before I could get the thing published. It's also likely fair to say that, once I'd hung the name on the then-incomplete book, it began to shape the direction of the stories I was writing with an eye to including them in a cohesive collection.

Other than a government ministry? I get a lot of titles from music, but not usually from the song or album it might initially seem. My first book, for example, featured a story called “I Was a Willow,” which is a line from Heart's “Crazy On You.” And while a character does sing that song to another character, the story's shape was one I arrived at after listening to a whole lot of Neko Case, particularly her album Fox Confessor Brings the Flood. I listened to that on repeat while writing the story, but it was obvious after a while that in order to do that album – and the general feel of Case's music – I'd need to situate the story in a very specific time, and the characters I found in that time drove custom vans and listened to late-'70s rock radio. In the new book, I have a story called “Graceland,” in which a character expresses a desire to travel to Elvis' Memphis home, but the inspiration for the title actually came from the Paul Simon album of the same name. I also have a story called “Horses,” which did not fit into this collection but was published by the excellent Found Press, that doesn't feature a single horse. Or animal. It's named instead for the Patti Smith album.

To evoke something interesting or inviting or arresting enough to spur a reader to peel back the front cover or turn the page.

I'm very happy with Lands and Forests, but I probably take a tiny bit more pride in The Utility of Boredom, which Spitball Magazine called “the worst title in the history of baseball books.” That's a badge I'll gladly wear. It was the name of one of the essays in the book, but I honestly had to be talked into adopting it as the name for the whole shebang by my publisher, Leigh Nash. Leigh figured that the name would be provocative enough to catch readers' eyes. I anticipated that it would place me in the crosshairs of baseball purists who reflexively reject the notion that any part of the game is dull. Both of us were right. But it's been a thrill, honestly, to probe the nature of that reaction, getting right down into an ontological debate about distraction and stillness and how life should be lived. I think, had I won the argument and named the book whatever it was that I favoured at the time – something awful and treacly that I don't now remember – the book might not have enjoyed the remarkable life it's had.

How about the title of Harold Brodkey's first collection, First Love and Other Sorrows? Or William Gass' In the Heart of the Heart of the Country. Both combine a hint of lyricism with a bit of a curveball to pique your interest, maybe invite a question, and make you suspect that even though you won't get an answer to that question the trip with still be worthwhile.

It can go either way. I've come up with titles that I've loved enough to want to write a story to suit it, and I've had completed stories go through two or three titles before arriving at the one that feels right. My first book's title story (“What You Need”) started life as “The Way We Live Now,” which is borrowed from Anthony Trollope's nineteenth century novel, and was used, probably unknowingly, by the story's narrator. In the end, the story seemed to be more adequately represented by a line of dialogue spoken by another character, in the form of a question: “You got what you need?” Often, I don't know how wrong a title is until I blindly stumble onto the right one.

Andrew Forbes was the 2019 Margaret Laurence Fellow at Trent University. His first book, the story collection What You Need, was a runner-up for the 2016 Danuta Gleed Literary Award, and was shortlisted for the 2016 Trillium Book Award. His second book, The Utility of Boredom: Baseball Essays, is currently in its fourth printing. Born in Ottawa, he spent much of his childhood in Atlantic Canada, lived in Oxford Mills, Ontario, and currently resides in Peterborough, Ontario with his wife and three children. Find him at andrewgforbes.com

A second story collection by award-nominated writer Andrew Forbes that rifles through the domestic and wild moments that make us human.

Inundation took three days. Three days to wash away better than a hundred years of enterprise. At the end of those three days there was an enormous lake, and a new waterway. In the new towns the sawdust still hung in the air. It was no biblical deluge, no great, sudden wave, but a slow and deliberate editing of landscape. You could check it in the morning and go away for a while and when you looked again you might not be certain the water had risen, until you began to remember the things you had seen before that you could not see any longer. Gradually it rose, ineluctable and ordained—a flood decreed by legislation, enacted by determination.On the third day, I left. — from “Inundation Day”

Escaping government-sanctioned flooding, obsessing over camera-equipped drones, violently mourning a lost brother, discovering a new passion in fencing, watching a wildfire consume a whole town: the stories in Lands and Forestssurvey the emotional landscapes of women and men whose lives, though rooted deeply in the land and their small communities, are still rocked by great cultural change. These are raw, honest character studies reminiscent of the work of Alexander MacLeod and Lisa Moore, but with a style and energy all their own.