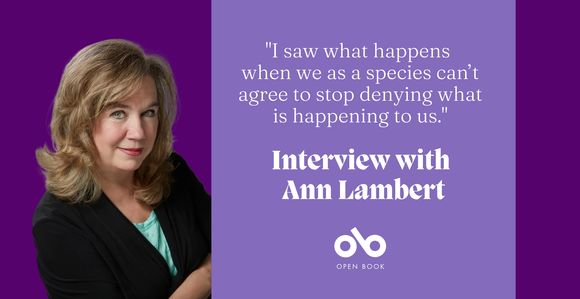 Ann Lambert's Whale Fall (Second Story Press) brings readers back to her series heroes, Marie Russell and Detective Roméo Leduc, at a happy time; the two are just about to marry, following their adventures in The Birds that Stay and The Dogs of Winter. But for the unlucky mystery-solvers, things rarely go smoothly, and when Marie's first love unexpectedly turns up, it's more than just romantic drama. Her old flame, Magnus Sørenson, is an extreme environmental activist who has plans for a big protest. When they turn dark—and deadly—Marie and Roméo put the honeymoon on hold to do what they do best – catch a killer.

Taut, timely, and thoughtful, the newest Russell and Leduc mystery from Lambert is a treat, with Lambert's signature combination of pageturner action, social justice, and irresistible characters, all set against a stunning Canadian backdrop.

We're speaking with Ann today about Whale Fall and her writing process for our Long Story interview series for novelists. She tells us about an experience at a real climate protest—an effort to protect her beloved home region, the Laurentians—that inspired the character of Magnus, a secondary character who became a fan favourite in the series and who returns in Whale Fall, and how, when she struggled to write during the pandemic, her kids turned out to be her fiercest cheerleaders. 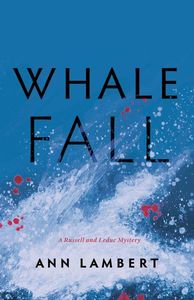 The initial spark or inspiration for the book—or I guess the moment that brought me to Whale Fall—really came from an experience I had about seven years ago. I was at a protest against the clear-cutting of a mountain near where I live in Ste. Lucie in the Laurentians—the beautiful region of Quebec where my books are set. The planned development was short-sighted and idiotic, and it threatened to destroy a beloved nature preserve. Long story short, a very well-known environmental activist came to offer his support to our cause, and he arrived to much noise and fanfare—in a helicopter. I’m not sure why that struck me as so ironic; he is a busy man and had about 30 minutes to give us—but he seemed like any other celebrity dropping in, posing for a photo op and rushing off again. So the seed of my new book planted itself. I saw a way into writing about climate change and environmental destruction while weaving it into a very personal story connected to Marie Russell, my protagonist, and Romeo Leduc, my cop. I saw a way into writing about how people on either side of an issue become so polarized, each entirely committed to their own agenda and vilifying the other. I saw what happens when we as a species can’t agree to stop denying what is happening to us and work together to salvage what is left of this beautiful planet that is our only home.

Whale Fall is the third in my Russell and Leduc mystery series, and they are all set in Quebec. The Birds That Stay, my first book is set in a little town, Ste. Lucie, in the beautiful and ancient Laurentian hills north of Montreal during the fall, its most stunning season. The Dogs of Winter, number two in the series, is set in Montreal during a brutal winter. Whale Fall takes place during our hot and humid summer back in Ste. Lucie and out on the North Atlantic Ocean as well. The landscape my books are set in—geographical, historical, political, and cultural are key ingredients. Place becomes a character, really. I live in both Ste. Lucie and Montreal, so I know both intimately. I have also spent time out on the ocean watching whales, both as a tourist and as someone observing whale researchers do their work

Oh, I have so many “favourite” characters, in the sense that I love some of them and am invested in all of them. Apart from my leads, I think the one I like the most is Ti-Coune Cousineau. In The Birds That Stay, he is the local low-life, a break and entry guy who stays afloat by ingratiating himself with former biker gang “friends”. He also sometimes makes a few bucks providing the local cops with information. Romeo Leduc (my cop) and Ti-Coune went to the same Montreal high school, and both come from very abusive backgrounds. Romeo became a highly respected police detective, and Ti-Coune an alcoholic thief. But Ti-Coune is a decent guy at heart, and especially loves his dog, Pitoune. In The Dogs of Winter, he becomes a bigger character as he helps Romeo with his investigation of the murders of homeless people in Montreal. He is also obsessed with finding his sister, Helene, who has been missing for several years and who seems to be connected to these homicides. For some reason, readers really like Ti-Coune, and so in Whale Fall, I continue his story. He has given up drinking, has found a good woman who runs the local dog shelter and keeps him sober and steady. Ti-Coune is very active in the movement to protect the local nature preserve from destruction. He still has a short fuse, though, and can’t help but get himself into trouble.

Fast-paced and chilling, Whale Fall is a thrilling tale of love and vengeance of the human and non-human kind!

I do a lot of research—I write pages and pages of notes in a beautiful leather-bound notebook I received from a close friend about 10 years ago. It is my talisman. As always, if anyone got a peek at my search history, they would wonder what I was up to! For Whale Fall, I looked up things like: how do you sabotage a float plane to make it crash without anyone figuring it out? What animal could decapitate a racoon? I researched the Quakers of Nantucket—a group of pacifist, vegetarians who made fortunes off the voracious slaughter of whales. I read reams of material on environmental protection organizations, on the fake meat industry, on industrial mass agriculture, on the destruction of habitat the world over. It is one of my favorite parts of writing a new book—what I get to learn.

Because Marie Russell is a marine biologist and baleen whale specialist, I did lots of fascinating research into whales, of course. I have been friends with people in the “whale head” community for decades, so I have had the amazing good fortune to learn about whales from a 12 foot zodiac boat, to watch someone dart them for DNA samples, to watch a pod of humpback whales breach those 50 ton bodies straight out of the water. I also had an encounter in Newfoundland that I describe in the book; two humpback whales were in the area, but we couldn’t get them to come closer. Our captain suggested we sing to them. So we did. Two of the songs didn’t work. But I swear, the third song was O Canada (the only one most of us knew some of the words to). Those whales turned and swam right up to our boat. We cut the engine and just experienced that intimacy. It was one of the most profound moments in my life.

I dedicated Whale Fall to “my dear friend Harriet Corbett, who took me out to sea to meet my first whale and changed my life.” Because that’s exactly what she did. In the 1980’s Harriet ran a marine mammal research station off the coast of northern Maine, and I spent parts of several summers there racing around in a zodiac boat getting very close to very large baleen whales. The researchers were cataloguing those populations—mostly finback whales, but humpbacks as well and some right whales. They were some of the most thrilling and fulfilling experiences of my life. Tragically, I recently learned that there are no more whales in those waters. Because of climate change, they have moved to different feeding grounds. This is almost unbearable for me to contemplate. The good news is that some whale populations are holding steady, but the North Atlantic Right whale population is down to below 400 individual whales. This is due to entanglement in fishing gear and boat strike. Both of these tragedies can be prevented, and my book is also dedicated to the people who work to save them.

I also dedicated Whale Fall to my husband David, and to my children, Alice and Isaac. David is my number one collaborator. As soon as I finish a chapter, I read it to him. He might ask a question or two, or point out if something is unclear. He sometimes makes great suggestions for the plot or character. I simply wouldn’t write these books without him.

I wrote Whale Fall during Covid. I am very proud of that, as it was really hard to force myself to write. Both my kids cheered me on from beginning to end. I felt like so many people did—frightened, discombobulated, disconnected. I struggled with the idea of pointlessness—there is a lethal pandemic assaulting the world, and what am I doing about it? Writing a murder mystery? If it has no meaning, why bother? This of course is the challenge of any writer at any time really, but Covid made it so much harder! I think many of us saw Covid as a metaphor: we humans are destroying this planet—and Mother Nature is getting her revenge. Well, Whale Fall is about love and revenge of the human and non-human kind. I hope its characters and the struggles they face resonate with my readers.

Ann Lambert has been writing and directing for the stage for thirty-five years. She is the author of the Russell and Leduc Mystery Series. Ann has been a teacher of English literature at Dawson College for almost thirty years in Montreal, Quebec, where she makes her home.

Marie Russell and Detective Roméo Leduc are finally getting married, but the joyous occasion is overshadowed by the unexpected arrival of Magnus Sørenson, renowned eco-warrior and Marie’s first great love. When Magnus’ plans for a dramatic environmental protest take a dark turn, Roméo and Marie are forced to abandon their honeymoon in the Laurentians in order to catch a killer, unearthing long-buried secrets along the way. Fast-paced and chilling, Whale Fall is a riveting tale of love, vengeance, and climate justice.