We're excited to announce that Jennifer LoveGrove is our April 2017 writer-in-residence! April is Poetry Month and we're thrilled to have Jennifer here to share with us on all things writing, reading, publishing, and more.

If you don't already know Jennifer and her work, check out her At the Desk piece below, originally posted March 7, 2017 and stay tuned to her WIR page throughout April!

Jennifer LoveGrove's third poetry collection keeps with her theme of show-stopping titles. Following on the heels of I Should Never Have Fired the Sentinel and The Dagger Between Her Teeth comes Beautiful Children with Pet Foxes (BookThug), a gorgeous collection that features animals and humans in memorable dreamscapes.

The poems disturb and agitate even as they move and pierce readers with observations about trauma, delusion, and the growing fear in our unstable world. A strong addition to a talented writer's output, Beautiful Children with Pet Foxes gets to the centre of our unexpressed fears and desires.

We're thrilled to welcome Jennifer to Open Book today, where she in turn welcomes us into her workspace as part of our At the Desk series. She tells us about her enviable view, forcing herself into life as a morning person, and the challenge of writing through 80s power ballads. She also explains the origin of the badass quote she shares at the beginning (and end) of her piece.

At the Desk: Jennifer LoveGrove

My office is blue. It overlooks a stream and a mix of maple, willow, evergreen and birch trees. My office is full of books and paper and a laptop and printer and tablet and Bluetooth speaker. And a dog named Edgar who snores beneath my desk and uses my feet as his pillow. 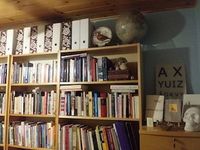 I didn’t start writing my latest book, Beautiful Children with Pet Foxes, in this office. In order to afford this home with an office on thirteen acres in the country east of Toronto, I needed my full-time job at the University of Toronto in the Division of Advancement. Once I’d committed to this job, I knew that I would need to designate time specifically for writing, so that the job would not overpower my other job – being a writer. Scheduling time to write sounds easy enough, right? Sticking to it and actually writing in these designated time slots was the hard part.

After spending much of my life staying up far too late, I forced myself to become a morning person, getting up an hour earlier than usual on weekdays to write. Sometimes I wrote at home but mostly I went to coffee shops. I was shocked to find myself actually up early, and shocked to find that my plan to write then worked. There is something about the early pre-dawn moments that is conducive to writing for me. It’s still a little dark, there’s a magnificent bright dawn over Lake Ontario, and it feels oddly illicit to be up at that time. There’s a peculiarly secretive mood to that time of day. But perhaps most importantly, my brain isn’t cluttered with the tasks and events of the day, and I can actually focus. 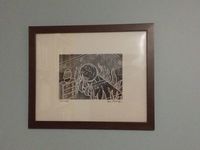 Strange poems emerged from these morning sessions. I employed all sorts of poetic exercises to get started and waste no time. Some I gleaned from workshops or books about writing, and some I made up myself. As cited in Beautiful Children with Pet Foxes, these prompts often used other poems as starting points, writing between their lines, or using a word or image to trigger something else. Many times, these prompts helped me to access material and imagery I hadn’t consciously considered, and startling and interesting poems and patterns began to emerge.

Starting early in the day had benefits besides focus and quiet. Often, after a productive morning session, I’d find myself returning to the draft or notes later in the day and editing throughout the afternoon or evening, and after a couple of years, I had more than enough for a collection.

That makes it sound easy; it wasn’t. Getting up in the dark is hard. Sometimes I was exhausted and unhappy and went back to sleep, then cursed myself later. On the mornings I did work on the writing, I found that some of the material I was working with, especially in 2014 and 2015 after a difficult and traumatizing 2013, was gutting. 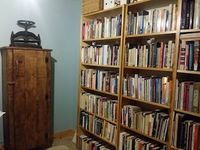 Coffee shops aren’t always easy to write in; they can be noisy, or cold in winter with people coming in and out, and sometimes the music is at best distracting (familiar Smiths songs) or at worst, horrible (80s power ballads). But I was away from most distractions (trying to ignore my smart phone), I had coffee, and I was there for one reason: to write. Even the tough stuff. Especially the tough stuff.

It wasn’t until 2016 that I was able to leave the coffee shops and move full-time into being a literal writer-in-a-cabin-in-the-woods. In 2015, my partner and I bought a beautiful log cabin on 13 acres of land, with forest, meadow, and a stream; with coyotes, foxes, and snapping turtles. It had three bedrooms; it now has two and my book-lined blue-painted office. It’s there, staring out the window overlooking the stream, or downstairs closer to the woodstove, that I worked for hours each day on poems, then editing them into shape. My supportive employers granted me a long leave of absence, and during this time, I was able to finish Foxes and start a new project, finally enjoying the office I’d prepared the year before. My life began to revolve around writing and dog walks and tending the woodstove. 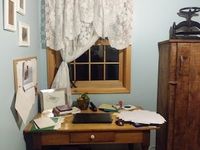 As for what inspires me, I have an ambivalent relationship with the concept. I no longer wait around to feel “inspired” to write. I think that’s kind of bullshit. Sure, sometimes you’re more in the mood, more energized or excited than other times, but I’m a firm believer that ass-in-chair and turn-off-the-wifi as a far better strategy than supplicating oneself so that divine inspiration deigns to descend upon you. Just sit down, shut up, and get to work. Easier said than done, I know, and I have plenty of days when I am wracked with resistance and insecurity and self-loathing and an urgent need to rearrange all the closets instead, but the next day, I sit down and try again.

I know this is a privileged, fortunate time period for me. Soon, I’ll be working full-time again and back to stolen hours in draughty coffee shops. But for now, I’ll do my best not to squander the time I have to spend in my own little office in my own log cabin in the woods. 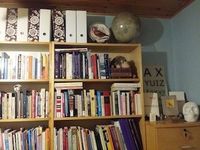 Though I already dismissed “inspiration” a couple of paragraphs ago, here’s a list of important items displayed prominently in my office:

Old photograph of me and my grandma in the mid-70s

Notebooks and scraps of paper with illegible ideas

Book on my desk called The Girls Who Went Away: The Hidden History of Women Who Surrendered Children for Adoption in the Decades Before Roe v. Wade by Ann Fessler (research for a novel I’m working on)

Print of an illustration by Ian Phillips (it’s of a girl in bed sleeping peacefully surrounded by flames, and it accompanied my first published short story, long ago in Taddle Creek)

Letter from the Scotiabank Giller Prize executive director, to glance at during imposter crises

Lines from a poem on writing by Marge Piercy called "For the young who want to": "You have to / like it more than being loved.” I’ve had these lines written out and hanging above my desk for twenty years now. The desks and offices have changed but the quotation has remained. For me, it’s a not-so-gentle reminder. Here it is again:

Jennifer LoveGrove is the author of the Giller Prize–longlisted novel Watch How We Walk, as well as two poetry collections: I Should Never Have Fired the Sentinel and The Dagger Between Her Teeth. In 2010, LoveGrove was nominated for the K.M. Hunter Artist Award for Literature and in 2015, her poetry was shortlisted for the Lit POP Awards. Her writing has appeared in numerous publications across North America. She divides her time between downtown Toronto and rural Ontario.

Beautiful Children With Pet Foxes by Giller Prize-longlisted author Jennifer LoveGrove bears witness to moments of extreme crisis that will take you on an odyssey through a terrain of startling dreamscapes. These are poems haunted by the ghosts of alienation, trauma, delusion, and fear that the past decade has instilled in us. Here you will encounter a whole host of personas, both tame and wild—from humans, to foxes, moose, deer and crows, slugs, fish, beetles, mosquitos, earthworms, and more—who give voice to the things we can’t express in our daily lives.