Say hello to Alison Wearing, our writer-in-residence for August! 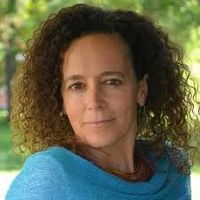 A critically-acclaimed author, educator, and multimedia artist, Wearing's previous book Confessions of a Fairy's Daughter earned her nominations for both the Edna Staebler Prize and the RBC Taylor Prize. Her newest work, the memoir Moments of Glad Grace (ECW), grew from a genealogy research trip to Ireland with her aging father, now suffering from Parkinson's. While not initially interested in exploring the far-reaching branches of her own family tree, Wearing began making observations and notes along the way to keep herself occupied.

Head over to our writer-in-residence page to read Alison's posts over the next month, and learn more about Alison and her new book by reading our interview below, where she discusses some of her favourite memoirs, her current work helping others write their stories, and how initial ideas are often just a gateway to something more profound.

Moments of Glad Grace began as a series of word-sketches as I watched my father in the early stages of Parkinson’s. We were in Dublin doing some genealogical research, but nothing bores me faster than genealogy (I was along for the ride) so I began creating these portraits of him just to keep myself from going to sleep in the archives. After a few days, I could feel a story beginning to emerge, so I did what I always do: took notes like mad, knowing that every detail was potentially valuable.

There were a series of questions that informed the writing of the memoir: How much do our ancestors inform who we are today, and how much attention should we pay to them? What is the relationship between facts and truth, and how do we know when we are in the presence of the latter? What is a legacy and what do we actually leave to the people behind us? I certainly wasn’t aware of these questions when I began writing—they felt like the tail of a creature I was pursuing. Initially, I just followed my curiosity, but those questions became clearer as I wrote, and ultimately, they came to shape the narrative.

The memoir changed completely from first to final version. When I began, I thought I was writing a short piece about my father’s Parkinson’s. I called the disease his new ‘life partner’ and I was playing with the conceit of it being a person, someone who was forever stealing my dad’s attention, tugging at his sleeve, etc. I thought it would make an interesting ten-page story, but when I got to page ten and we still hadn’t left Dublin airport, I knew I was working with something much bigger. Only after I’d written 40-50 pages did I ditch my initial ‘Parkinson’s as life partner’ idea (which had begun to feel contrived) and feel the focus of the story change. Sometimes our first idea is just the doorway into the writing. We need to be willing to let the larger story tell us rather than the other way around.

I’m far more interested in the quality of the writing than I am in sensational subject matter, so some of my favourite memoirs are quiet and brilliantly crafted: There is a Season by Patrick Lane, Birds Art Life by Kyo Maclear, Know the Night by Maria Mutch. That said, I’ve also been inspired by memoirs that grip me by the collar and don’t let go: I Am I Am I Am by Maggie O’Farrell, Educated by Tara Westover, Wave by Sonali Deraniyagala. And I often return to reread the books that inspired me to start writing in the first place: Running in the Family by Michael Ondaatje, Pilgrim at Tinker Creek by Annie Dillard, I Know Why the Caged Bird Sings by Maya Angelou.

For the last couple of years, I’ve been creating and assembling Memoir Writing, ink., a 12-week interactive writing program that guides people through the process of transforming personal writing into memoir. It’s been incredibly satisfying to help people bring their stories to the page, and I love the supportive community that has emerged. We may all be living and writing in isolation, but being connected as we do feels gorgeous.

Alison Wearing is the bestselling author of Confessions of a Fairy’s Daughter, an Indigo Top 50 pick shortlisted for the Edna Staebler Prize and longlisted for the RBC Taylor Prize, and Honeymoon in Purdah: An Iranian Journey, and Moments of Glad Grace. Her online writing program, Memoir Writing, ink., guides people through the process of transforming personal stories into memoir.

Moments of Glad Grace is a moving and witty memoir about a daughter’s evolving relationship with her aging father, the small moments we share, and the hunt for roots and belonging.

The story begins as a trip from Canada to Ireland in search of genealogical data and documents. Being 80 and in the early stages of Parkinson’s disease, Joe invites his daughter Alison to come along as his research assistant, which might have worked very well had she any interest — any at all — in genealogy.

Very quickly, the father-daughter pilgrimage becomes more comical than fruitful, more of a bittersweet adventure than a studious mission. And rather than rigorous genealogy, their explorations move into the realm of family and forgiveness, the primal search for identity and belonging, and questions about responsibility to our ancestors and the extent to which we are shaped by the people who came before us.

Though continually bursting with humor, Moments of Glad Grace is a story about identity, history, and ultimately becomes a song of appreciation for the precious and limited time we have with our parents.