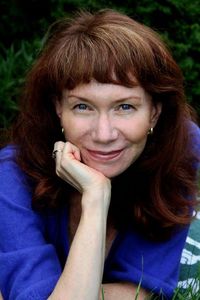 A long and happy marriage is no easy feat, but Max and Maggie Binder are amongst the lucky few. Twenty years after they met, Max is still madly in love with his feisty wife, and wants to give her a 40th birthday to remember. This innocent desire, however, sets into motion a chain of events that will change not only the Binders' lives, but the lives of many people in their small prairie city.

So begins the story of Méira Cook's Once More with Feeling (House of Anansi). It's a fascinating story that blends off-beat humour, lush prose, and keen emotional insight to tell the story of a community, a marriage, and the way memory and time play with our most deeply held convictions.

We're excited to welcome Méira to Open Book to spill a few secrets as part of our Dirty Dozen series, where we ask writers to share twelve unexpected facts about themselves. Méira tells us about swimming in shark-infested waters, why you shouldn't play jazz if she comes over, and the accident that made her feel like a real Canadian.

The Dirty Dozen with Méira Cook:

Méira Cook is the award-winning author of the novels The House on Sugarbush Road, which won the McNally Robinson Book of the Year Award, and Nightwatching, which won the Margaret Laurence Award for Fiction. She has also published five poetry collections, most recently Monologue Dogs, which was shortlisted for the 2016 Lansdowne Prize for Poetry and for the 2016 McNally Robinson Book of the Year Award. She has won the CBC Poetry Prize and the inaugural Walrus Poetry Prize. She has served as Writer in Residence at the University of Manitoba’s Centre for Creative Writing and Oral Culture, and the Winnipeg Public Library. Born and raised in Johannesburg, South Africa, she now lives in Winnipeg.

Once More with Feeling

After twenty years Max Binder is still in love with his fiery wife, Maggie, and is determined to get her the perfect fortieth birthday gift. But Max’s singular desire — to make his wife happy — leads to an unexpected event that changes the course of his family’s life and touches the people who make up their western prairie city.

Set over the course of a single year, Once More With Feeling tells the story of a community through intersecting moments and interconnected lives. The colourful citizens who make up this city — bisected by railway lines and rivers, connected by boulevards and back alleys — are marked by transformation, upheaval, and loss: the worker at a downtown soup kitchen who recognizes a kindred spirit amongst the homeless; the aging sisters who everywhere see the fleeting ghosts of two missing neighbourhood children; a communal voice of mothers anxious for the future of their children in the discomfiting world they inhabit — this place of memory, amnesia, longing, and belonging.

Featuring a cast of eclectic characters, Once More With Feeling is about a community, about a family, and about the way time makes fond fools of us all. Award-winning author Méira Cook has crafted a novel that is at once funny, poignant, and yes, full of feeling.