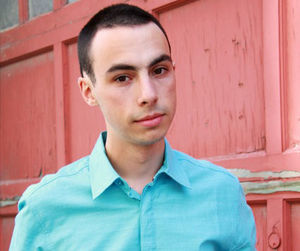 The Toronto Star praised Mad Long Emotion for its "exuberant openness and passion" calling Ladouceur's nature-focused imagery "striking". While taking cues from the natural world, Mad Long Emotion is far from pastoral; it is creative, fresh, and packed with honest emotion and longing as it examines love and connection.

We're excited to talk to welcome Ben to the site today to talk about the collection, its fabulous title, and the impact of titles in literature generally as part of our title-obsessed Entitled interview series.

He tells us about the artist whose work inspired both his title and his collection, the Munro title he loves even though it shouldn't work, and why you should be on the lookout for a bossy title.

A huge influence on the book’s contents was the artist Agnes Martin, whose abstract paintings often have titles that are weirdly simple and innocent – “Friendship,” “Gratitude,” “I Love The Whole World.” I wanted the book to shout its sincerity like that. Mad Long Emotion sprung into my brain some afternoon. I think I was chopping tomatoes. It’s just the correct title. The book addresses madness, and it contains a mad amount of longing, and it contains lots of other emotions, and some of those emotions are mad, and some of them are long, and with some of them it’s mad how long they are.

I personally think that book titles should be compelling and attractive, but the fun thing about short story collections and poetry collections is that they contain lots of titles, and the only one that has to be compelling/attractive is the one on the cover and spine. The rest of them can be misfits, once that first title has made a good enough first impression to draw the reader in.

It might be the Alice Munro story “Deep-Holes,” which, when you look at it, it looks like the worst title ever. It’s weird and dumb. But context is everything. The collection that this story can be found in has a beautiful, fascinating title – Too Much Happiness. That’s the sort of title that makes you buy a book maybe! And the cover is snowy and wistful, and the author is a proven commodity – this was Munro’s thirteenth book, published 2009 (post-Man Booker International, pre-Nobel). So when you see the book that is called Too Much Happiness at your bookstore, you buy it and take it home. I feel this is all plausible. Then you sit and read the book, and halfway through you hit a story called “Deep-Holes,” which is the dumbest title in the world. But it’s the fourth story in the collection; the reader’s trust has been gained by now (or else it will never be gained so what’s the difference). To me, and maybe to me alone, it’s like the author is saying: “I know this is a terrible title, but I’m going to spend the next twenty pages selling you on the appropriateness of this terrible title.” In the short story, it turns out that “Deep-Holes” was a big outdoor sign the protagonist once read, on a day that would later loom huge in her memory. She finds the hyphen perplexing, and she has a brief “huh?” sort of experience with the phrase “Deep-Holes” – an experience that reflects the one the attentive reader has already had, when they first saw the phrase in the table of contents or the start of the story. A few paragraphs later, one of those deep-holes plays a role in the protagonist’s life being unalterably changed. The day she saw the “Deep-Holes” sign is a day she would revisit and relive forever. The hyphen has stuck in her memory too, and she later reflects on the day as “the deep-hole drama.” So the reader comes out of the story with a new understanding of the title, which is always really satisfying.

At some point I wanted to call it I Hope For A Response In The Affirmative, which is a way I sometimes end work emails, because a big part of my job is asking people to do things. I thought this was a common email signoff, but it turns out it 100% is not. So then I thought, if it came from my brain, I can use it all I want. It’s true that I hope for an affirmative reaction with this book – when you make something and show it to people, that’s usually what you want. But it was too self-conscious as a title. Reading a book with “I” in the title, and especially a book with “I hope” in the title, would be like going to a sushi restaurant and seeing that there are no tables and you have to sit at the counter no matter what, with the chef there, making the food. You should have the option of being alone. I wouldn’t want a reader to think about my own hopes or expectations. Instead just take the book, you paid for it and it’s yours now.

For Your Safety Please Hold On (Kayla Czaga), Feel Happier in Nine Seconds (Linda Besner), and Wait For The Green Fire (Dale Matthews) are three of my favourite poetry collections to be published in the last few years. Maybe it’s a good sign when titles tell you what to do.

Ben Ladouceur is the author of Mad Long Emotion, a poetry collection published by Coach House Books. His first collection, Otter, was selected as a best book of 2015 by the National Post, nominated for a Lambda Literary Award, and awarded the Gerald Lampert Memorial Award for best debut collection in Canada. In 2018, he received the Writers’ Trust Dayne Ogilvie Prize for emerging LGBT writers. He lives in Ottawa.

Desire and dieffenbachias: new poems from the award-winning author of Otter . Mad Long Emotion wants to talk flora to fauna like you. Loosestrife shoos away humans and green carnations flirt with handsome men. Numerous species, both spiny and spineless, prove as invasive as desire: from Great Lake lampreys to hydraulic triceratopses, we're all just looking for love.