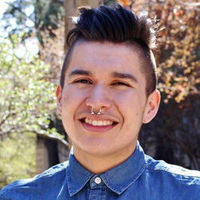 Billy-Ray Belcourt has won the Canadian Griffin Poetry Prize for his acclaimed collection, This Wound is a World (Frontenac House). At 23 years old, he is the youngest winner of the prize ever. Belcourt is no stranger to significant honours - his achievements include being the first-ever First Nations Canadian to be named a Rhodes scholar and being awarded the 2017 P.K. Page Founder’s Award for Poetry. This Wound is a World is his debut full length collection.

The judges for the 2018 Griffin Poetry Prizes were Sarah Howe (UK), Ben Lerner (US) and Ian Williams (Canada). The jury selected the shortlist, and subsequently the winners, from 542 collections of poetry submitted for consideration by 33 countries.

The awards ceremony, known as a highlight of the literary calendar in Canada, saw 320 guests celebrating in Toronto's Fermenting Cellar in the Distillery District. Scott Griffin, founder of the prize, and trustees Mark Doty, Carolyn Forché, Marek Kazmierski, Michael Ondaatje, Jo Shapcott, Karen Solie and David Young hosted the event where the guests enjoyed readings by Ana Blandiana and her translator Viorica Patea, The Griffin Trust For Excellence In Poetry’s 2018 Lifetime Recognition Award recipient, a recitation of Wayde Compton’s ‘Illegalese: Floodgate Dub’, by Hamish Marissen-Clark, a 2018 national winner of Poetry In Voice/Les voix de la poésie, and a speech by August Kleinzahler, winner of the 2004 International Griffin Poetry Prize.

The other poets honoured with places on the 2018 shortlists were: Tongo Eisen-Martin for Heaven Is All Goodbyes, published by City Lights; Layli Long Soldier for Whereas, published by Graywolf Press; Natalie Shapero for Hard Child, published by Copper Canyon Press; Aisha Sasha John for I have to live., published by McClelland & Stewart; and Donato Mancini for Same Diff, published by Talonbooks.

The Griffin Poetry Prize was founded in 2000 to serve and encourage excellence in poetry. The prize is for first edition books of poetry written in, or translated into, English and submitted from anywhere in the world.

If you missed it, be sure to check out our conversation with all the finalists to hear more from them in their own words about their writing processes, inspiration, and more.