The 90s may (somehow) be thirty years ago now, but in Melanie Mitzner's Slow Reveal (Inanna Publications), where are whisked back to the final decade of the 20th century for an intense family portrait set against the backdrop of New York City before 9/11, it's amazing to see both how much and how little has changed.

The Kanes are an artistic, complicated family where secrets, longings, addictions, and aspirations run headlong into one another when the mother, Katherine's, secret life is revealed. Her husband Jonathan struggles with sobriety and as their marriage collapses, their careers seismically shift, and their adult daughters try to cope with it all, Mitzner delves into questions of identity and loyalty that are complex, harrowing, and thoughtful all at once. A story of endings — of a family's life as they knew, of a century, of a secret — becomes an unforgettable exploration of trust, change, courage, and art itself in a world unknowingly balanced on the precipice of massive upheaval.

We're excited to speak with Melanie today about Slow Reveal, which is her debut novel. She tells us about how she used the book to explore the similarities between intimate relationships and the artistic processes, why the New York setting and its particular time period were essential for the story she needed to tell, and what she learned from writing this book. 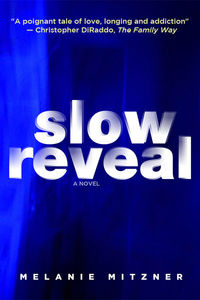 I do. When I first started, I wanted to explore how building intimacy and trust in relationships echoes the artistic process. Both are liminal, ever evolving, expose our vulnerabilities, our insecurities and require authenticity. Failure is also an inevitable part of the learning process in love and in art. We tend to sabotage what we want most and struggle to transcend the challenges we face in our personal as well as our art lives. Rarely if ever does a work or a relationship end up being what we envisioned in the first place because conception is all about fantasy and imagination. It isn’t until the discovery process that we actually begin to understand what we hope for and what we’re trying to accomplish.

I’ve had a love affair with New York since I lived there from 1979-1993. I chose to set the novel in the 1990s, in Tribeca and the East Village because I see that as a transitional period. Intense gentrification began to strip the neighbourhoods of their ethnicity, that sense of community, the ability of all classes to co-exist and retain the diversity that always characterized the city in the past. Before the mid-90s, tiny establishments and bodegas were opened by self-employed creatives – designers, chefs, art dealers, shop keepers, gallerists – who weren’t connected to institutions or Wall Street. As rents and leases soared, they began to disappear, drastically changing the character because so many were forced to leave. The transformation is symbolic of the disruption in the story as the main character realizes the changes that took place over the years which permanently impacted her relationships. The setting is also symbolic of the artistic process, accepting the fact that external influences don’t destroy the intrinsic value of art. The heartbeat, the spirit of New York, like their work, lives on.

The ending did evolve over time. On previous drafts the characters’ destinies were more laid out. In order to be true to the possibilities and the precariousness of relationships and their work, the end couldn’t be so predictable. Another aspect that changed was ending the novel with verse since the character Naomi is a poet so I wrote a stanza that reflected the ever-present risk of the past preying on the present and altering the outcome.

I often fall for minor characters whose personalities and behaviours don’t need to be “justified,” so you’re more free and open as you develop them but in Slow Reveal, I really like the principal character Naomi, a lesbian poet, as she’s very philosophical and brutally honest, in touch with the conundrums in life she can’t really solve.

The precariousness of the artistic process is as risky, messy and unpredictable as building intimacy and trust in love, so devotion and commitment are not the guard rails that keep a work or relationship on track but rather a form of entrapment.

Or more literally, set in 1990s New York, the Kane family capsizes when they discover the parallel life of Katharine, film editor, mother, lover, and wife.

The novel speaks to the profoundly human enigma of the nuclear family, those painful yet tender bonds. How much our primary relationships influence the trajectory of our lives. How emotional heredity, not wealth or physical attributes, is a legacy of those family dynamics and how traumatic events manifest psychologically and can shackle us, holding us back. So I wrestled with the old debate of nature vs. nurture: how much control we actually have over our own personal development.

Melanie Mitzner is a Montreal/New York writer. She is an Edward Albee Fellow and a finalist in four fiction and screenwriting competitions. Former journalist and publicist in tech/broadcasting and co-founder of The Groovy Mind, Melanie’s work focuses on political, social and environmental justice. Slow Reveal is her debut novel. She is also toiling away on a controversial new book, The Expat.

Set in 1990s New York, Slow Reveal paints an extraordinary portrait of artists who defy the arbiters of culture and challenge social norms. Art, addiction, and family dynamics capsize the Kanes when they discover the parallel life of Katharine, film editor, mother, lover, and wife.

“A poem is never finished, only abandoned,” wrote Paul Valéry, an outcome echoed in her decade-long affair with Naomi, a lesbian poet. Katharine’s marriage to Jonathan collapses in his struggle with sobriety when he’s ostracized for politicizing art and abandons his career for advertising. Faced with confrontations from her two grown daughters, an installation artist and an aspiring writer, Katharine hangs onto her former life. When unforeseen tragedy strikes, devotion and commitment are not the guardrails that keep their work or relationships on track but rather a form of entrapment.

A captivating story about relevance at the end of the 20th century, the novel questions the voracious demands of contemporary society through a riveting portrayal of turbulent family life, impacted by art shaped by the media and influenced by social and political injustice. Success is redefined by the courage to embark on the artistic process, as risky, messy and unpredictable as building intimacy and trust in love.