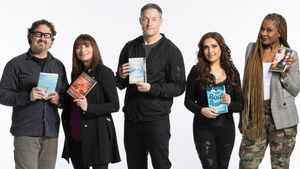 CBC Canada Reads host Ali Hassan will have his hands full during the 2018 competition, with a panel of savvy and confident readers defending five books that have already amassed significant acclaim. Each of the books that made it onto this year's shortlist have a strong shot at fulfilling the theme of the 2018 competition: "One Book to Open Your Eyes".

We're especially excited to see friend of Open Book Cherie Dimaline on the list for her YA novel The Marrow Thieves, which has already garnered multiple honours including the Governor General's Literary Award and the Kirkus Prize in the U.S. Congrats to Cherie and to all the shortlisted authors!

The Canada Reads debates will take place in front of live audiences over four days from March 26 to 29, 2018, and will be broadcast on CBC Radio One, CBC and online at CBCbooks.ca.  Each day of the competition, one book will be eliminated by the panellists, until a winner is voted the must-read book for Canadians in 2018.