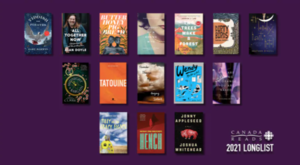 CBC's annual book showdown, Canada Reads, returns in 2021, and yesterday book lovers got a glimpse at the potential contenders. The eclectic longlist, containing 15 titles, will be whittled down to five for the 20th annual book debate show. The final selections will be made by the celebrity panellists, who will each choose a book to defend through the four day competition.

The "Canada Reads effect" is traditionally considered one of the biggest boosts a book can get in terms of publicity and sales, so the stakes are high. Both the panellists and the books they choose to champion will be revealed on January 14.

Of the 15 longlisted titles, nine are published by independent presses. Notably, the list includes a graphic novel from Montreal's Drawn & Quarterly, a novel from newcomer Quebec press QC Fiction (founded in 2016), and a novel from New York-based speculative fiction publisher Erewhon Books (the author, C.L. Polk, is Canadian).

The debates will take place March 8-11, 2021, with comedian Ali Hassan returning as host to shepherd the panellists through a series of debates that sometimes turn quite spirited. The entire competition will be broadcast on CBC Radio One, CBC TV, streaming service CBC Gem, and on CBC Books.

Do you have a favourite already? Let us know on Twitter and stay tuned to Open Book for coverage of the 2021 competition.