Today CBC Books announced that actor and comedian Ali Hassan will return to host the 2018 Canada Reads debates, after a successful debut year in 2017, where he guided the something fiery panellists through the competition. The theme for this year's competition will be "One Book to Open Your Eyes". 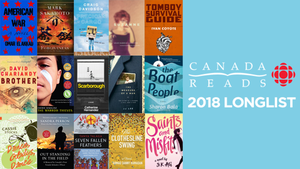 The longlist for potential books was also announced. Lots of heavy hitters populate the list including award winners and nominees Brother by David Chariandy (McClelland & Stewart), The Marrow Thieves by Cherie Dimaline (Dancing Cat Books), Seven Fallen Feathers by Tanya Talaga (House of Anansi Press), American War by Omar El Akkad (McClelland & Stewart), and Scarborough by Catherine Hernandez (Arsenal Pulp Press). Chances are good several of those titles will appear in the final five, but we'll have to wait until January 30 to find out.

The Canada Reads debates will take place in front of live audiences over four days from March 26-29, 2018, and will be broadcast on CBC Radio One, CBC and online at CBCbooks.ca.  Each day of the competition, one book will be eliminated by the panellists, until a winner is voted the must-read book for Canadians in 2018.

Stay tuned for the announcement of the final books as well as their celebrity champions, in late January.