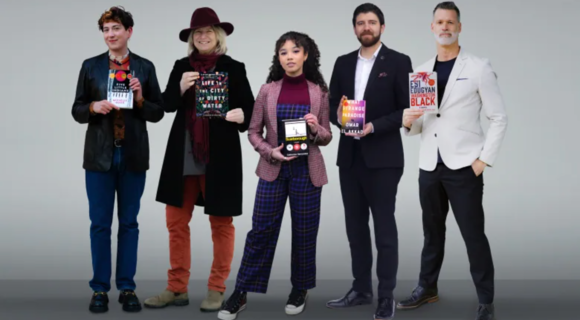 This March, one Canadian writer will add the coveted CBC Canada Reads crown to their honours, and it looks like this year, a major literary honour won't be an unfamiliar experience for the eventual winner. The five books chosen to compete are already highly decorated and beloved titles, making it a particularly stiff competition.

With two Giller Prize winners, in Esi Edugyan's Washington Black and Omar El Akkad's What Strange Paradise (which won the most recent Giller Prize just a few months ago); the multi-prize nominated Scarborough by Catherine Hernandez; the Governor Generals' Literary Award and Amazon First Novel Award winner Five Little Indians by Michelle Good; and the acclaimed national bestseller Life in the City of Dirty Water by Clayton Thomas-Müller, it's perhaps the literary debate's most decorated shortlist ever.

Host Ali Hassan, who stars in the CBC comedy Run the Burbs and hosts CBC Radio’s stand-up comedy show Laugh Out Loud returns for a sixth stint at the iconic round table, moderating the debate between the five panellists. Each panellist is championing a book they chose for themselves from the long list, and will be responsible for both prepared and off the cuff defences of their chosen title over the four-day debate schedule. Each day, a vote amongst the panellists will eliminate one title.

The theme of the 2022 debates focuses on community and connection, largely as a response to the isolation wrought by the pandemic. "We know so many of our neighbours are feeling isolated this winter, so the moment feels right to explore stories of community," said Hassan. "This year's books will remind readers that we're all connected and that we're stronger when we come together. We can work through hard things and find the hope we need to keep going."

The debates will air March 28-31, and as in past year, will be broadcast on CBC Radio One, CBC TV, CBC Gem and on CBC Books.

Stay tuned to Open Book for coverage of the debates and an upcoming conversation with the panellists about their strategies heading into the debates.