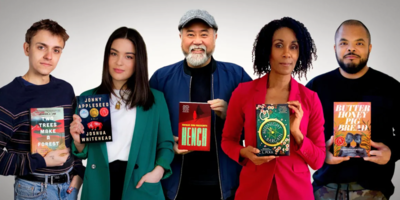 Today CBC Books announced the final selections for the 2021 edition of Canada Reads, the debate show where five books are pitted against one another and one is voted off each day, Survivor-style, until a winner is crowned at the end of a week of intense discussions.

Five celebrity panellists give their time and energy to defending a book of their choosing. This year's line up includes fiction and nonfiction from publishers big and small, including, notably, two books from B.C.'s progressive and independent Arsenal Pulp Press.

The debates will take place March 8-11, 2021, with comedian Ali Hassan returning as host. They will be broadcast on CBC Radio One, CBC TV, CBC Gem and on CBC Books. Stay tuned to Open Book for coverage of the debates in March, and tell us on Twitter who you'll be rooting for.