Today was Day Two (of four) at CBC Canada Reads and the debates were intense but marked by a generosity amongst the panelists towards each other's chosen books.

Joe Zee was the competition's first free agent after Monday's debates saw his selection, The Woo-Woo by Lindsay Wong (Arsenal Pulp Press), voted off. He had the chance at the top of the program to pay homage to his pick, saying "We need books like Lindsay's" and re-iterating his love for the memoir before the remaining titles were reviewed.

The first question from host Ali Hassan asked the panelists to focus on the theme of the year - "one book to move us" - by asking what made each of their books "a great book". Lisa Ray, defending Brother by David Chariandy (McClelland & Stewart) started things off, praising Chariandy's "amazing writing" and the book's "special alchemy."

Yanic Truesdale, defending Suzanne by Anaïs Barbeau-Lavalette, translated by Rhonda Mullins (Coach House Books), praised his book's "direct, raw, and emotionally charged" prose and the difficulty of pulling off an unusual novel-length second person perspective. Truesdale set himself one of the tougher tasks of the competition, choosing Barbeau-Lavalette's tale about her grandmother, who abandoned her children to be part of an artistic movement. He denied that an unsympathetic protagonist should disqualify a book, arguing not only for the literary mastery on display but the empathy Barbeau-Lavalette shows in getting to "forgiveness" and "admiration for a rebel." He got a surprise show of support from Ray, who argued that women artists who leave children behind to pursue work are judged much more harshly than men artists who do the same. "How many children did Picasso leave behind?" she demanded, drawing applause from the audience. 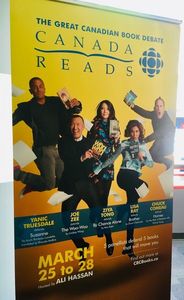 Chuck Comeau, defending Homes by Abu Bakr al Rabeeah and Winnie Yeung (Freehand Books) praised the memoir he chose as "turning a difficult story into a tale of love and hope" and praising its ability to bring the plight of Muslim refugees to readers. He extolled the inspiring nature of the book, adding "don't be surprised if Hollywood comes calling."

The final panelist still in the fight, Ziya Tong, defending By Chance Alone by Max Eisen (HarperCollins), defended her title with fervour. She called Eisen "a master of the senses" and the book "a gripping page turner" that she read in one sitting, saying that while Holocaust history may often be black and white on screen, in Eisen's hands it is vivid and immediate.

Much of the debate came down to the importance of literary greatness versus the social relevance of a book's subject matter. Comeau mentioned his emotional discomfort with the title character in Suzanne's action, while Ray focused on her love of lyrical and poetic writing. Truesdale pointed out that he and Ray are both actors, who are used to focusing on the emotional and artistic aspect of a work to connect to it, rather than only the subject, and observing it may explain their similar attraction to beautiful prose.

Halfway through the debates, there was a break for pre-recorded messages from friends and mentors of the panelists, with one message of encouragement for each of them. Notably, David Suzuki recorded a message for Tong, which spoke to the importance of books like By Chance Alone working against racism through education. The message for Joe Zee was played despite his book being voted off - the recording was from actress Julianne Moore, and got a laugh from the audience when Moore wished Zee lucked but added "I don't really know what this show is."

In the second half of the debates, the panelists discussed the books' settings, with praise all around for the four remaining titles. Comeau commented generously on both Brother and By Chance Alone, saying of the latter "it makes you feel so grateful".

But soon enough it was time for votes and in a surprise, the first three were each different, with Tong's reveal making the final choice. "I voted for the person who voted against my book," she said, when she revealed her choice.

Truesdale had a moment to give Suzanne a warm send off, revealing that the book was actually originally sent to him by accident, but he fell in love with it upon reading. "I don't believe in coincidences," he said. "I think her writing is fantastic... it's a beautiful book". Comeau for his part commented he felt guilty voting to remove a French Canadian book from the competition (which he even read in the original French).

Stay tuned to Open Book for more Canada Reads coverage - we'll be back for the final debates on Thursday, and until then you can stay up to date with everything Canada Reads online or on demand via the CBC Gem streaming service.