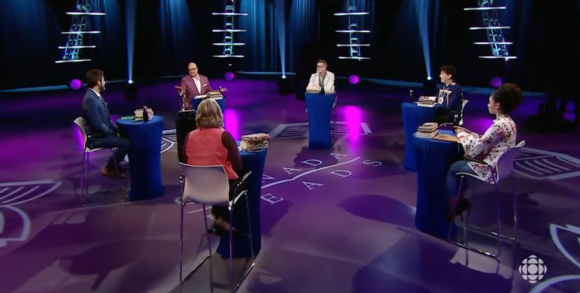 CBC's Canada Reads kicked off this morning at 11:00am ET, with each of the five panelists proving themselves eloquent champions for their chosen novels.

Host Ali Hassan followed the format of previous years, keeping the hour long debate zipping along. After some banter, and a content warning regarding the nature of the trauma, racism, and violence depicted in some of the books, everyone quickly got serious. A video trailer was played to introduce each book, after which the debaters were each given just 60 seconds to plead their case for why their title should be crowned, in keeping with this year's theme, the one book "to connect us" across Canada. 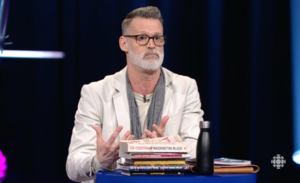 First up was Olympian and LGBTQ2+ advocate Mark Tewksbury, who is defending Washington Black by Esi Edugyan. He praised not only the content of the book but the craft shown by Edugyan, a Giller Prize winner, speaking to the "joy and pleasure of losing ourselves in reading" that Washington Black provides for readers, and declaring the book "a contemporary classic". 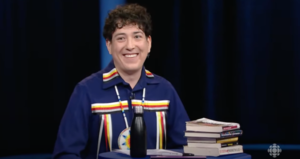 Next up was Ojibway journalist and Vogue fashion writer Christian Allaire, defender of Five Little Indians by Michelle Good. Allaire emphasized the importance and impact of Good's novel, which has won numerous awards and explores the traumatic legacy of Canada's residential schools, saying "history is not history until it’s over". 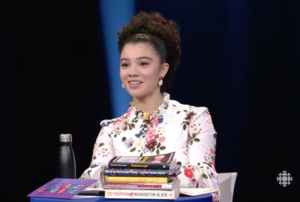 In defending Scarborough by Catherine Hernandez, actor and activist Malia Baker (the youngest ever panelist at 15 years old) praised the novel's ability to spark conservations about important issues, noting it doesn't hold back in highlighting "who’s important in the world and who’s disposable". She went on to say "I needed this book", and that its intimately specific setting doesn't stop it from being "a microcosm for Canada as a whole." 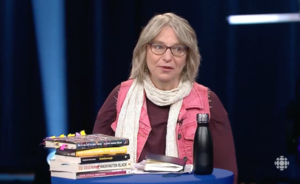 Forest ecologist Suzanne Simard gave a calmly passionate defence of Life in the City of Dirty Water by Clayton Thomas-Müller, saying "Canada is at a crossroad... we are facing an uncertain future because of climate change and the intergenerational trauma that has brought us to this place." She praised Thomas-Müller's ability to translate his traumatic upbringing as a Cree youth in Winnipeg into a life of community, healing, and activism, as a model that could inspire Canada as a whole. He "turned his anger into action. In his healing journey, he became an activist, a warrior." 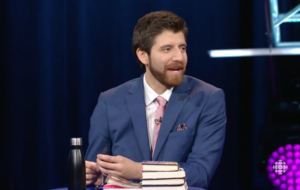 The final panelist to speak was entrepreneur and former Syrian refugee Tareq Hadhad, defending recent Giller winner What Strange Paradise by Omar El Akkad. In an eloquent opening, he praised the acclaimed novel for its universality, saying it "connects to every human being looking for hope and home... It's also a deeply humanistic fable of empathy and compassion, carelessness and unvarnished indifference".

With the first five speeches punctuated by the familiar Canada Reads "time's up" bell, Hassan then poised the first question, asking which book best bridges the divides we are experiencing.

With the debaters officially allowed to now speak to one another's titles, Allaire tentatively kicked things off, cheekily saying he didn't want to "come in hot" but noting some of the characters in Scarborough felt less developed to him. Simard praised Five Little Indians but felt Thomas-Müller's memoir did a better job looking forward to the future and inspiring readers towards hopeful change. Allaire responded to that by saying "to get to truth and reconciliation we need the truth", highlighting what he felt was the importance of confronting the past as well as looking to the future.

Baker weighed in to say she enjoyed What Strange Paradise but felt the writer structure alienated her as a reader at times. As well, Tewksbury gently objected to what he felt was a pessimistic ending in What Strange Paradise, saying he felt a more hopeful perspective would serve the winning title best.

Generally though, as often happens on the first day on Canada Reads, the panelists stuck closer to defending their own titles than critiquing their fellows.

Before offering the panelists the opportunity to give a final 30 second power pitch, Hassan played messages of support for each panelist from their chosen author. The final recorded message came from El Akkad, known for self-deprecating humour in interviews. Addressing Hadhad, he said, "you are a far more charming and eloquent human being than I am… whatever you come up against, just think of what I would do in that situation and do the opposite," drawing laughs from the panelists. About El Akkad's humorous humility, Hassan quipped, "we know Omar well on this show, he’s on brand there".

After the panelists' final push for their books, it was time to vote. With their cards submitted, Hassan observed that he "noticed there was a swiftness to some of the voting". Hadhad, on the other hand, was torn, saying "I changed my mind four times [during voting]". This soon proved interesting, as Hadhad's fellow panelists weighed in one by one, each with a vote for a different book. Hadhad then broke the tie by revealing he had voted, like Baker, to eliminate Life in the City of Dirty Water by Clayton Thomas-Müller, making the memoir, defending by Simard, the first book voted off.

Simard was wistful about the memoir's elimination, saying she "hope[s] people read [it]... It’s a book of learning from our past mistakes as a nation."

Hassan noted that Simard will now be a "free agent", with a vote each day but no book to defend, and joked that Hadhad, CEO and Founder of Peace by Chocolate, could send Simard some tasty snacks to try to sway her vote.

With such a range of votes amongst the panelist for day one, it feels like a wide open playing field, making the upcoming debates excitingly difficult to predict.

That's all until tomorrow morning, when the debates will resume at 11:00am ET, continuing on both Wednesday and Thursday, when a final winner will be crowned. You can tune in each day at 11:00 am on CBC Radio One and 1:00pm ET on CBC TV and CBC Gem, and via live stream at 11:00am ET on CBC Listen and CBCbooks.ca. Stay tuned for more coverage on Open Book, and check out our interview with all five panelists.