As the penultimate day of CBC Canada Reads 2022 kicked off this morning, host Ali Hassan offered entrepreneur and former Syrian refugee Tareq Hadhad, who was, until yesterday, defending recent Giller winner What Strange Paradise by Omar El Akkad, the chance to speak a final time on his chosen book, which was voted off at the end of Tuesday's debates.

Hadhad jumped in with a passion, telling Canadians to "run, not walk" to read What Strange Paradise, speaking to the book's clear-eyed perspective on the refugee experience, capping it off with an Einstein quotation that "the world will not be destroyed by those who do evil but by those who watch them without doing anything," as a reference to the complex emotional landscape of the book about ethics, kindness, and support for those wrenched from their homes.

Hassan then posed the first question to the panelists still in the fight, asking each one, "why is your book the right book for you to defend?" Olympian and LGBTQ2+ advocate Mark Tewksbury, who is defending Washington Black by Esi Edugyan, was up first once again. Tewksbury was personal, discussing how he had connected to the character of Washington and referencing his 1998 coming out, which lost him a lucrative speaking contract and prompted headlines like the one he recited in his opening speech, "Sports hero declares his homosexuality".

"I was finally out," he said, "I was free... but was I?" referring to a "tape in [his] head" that made him question his self worth. "All it takes is a trip to any one of 71 countries in the world, where it's illegal to be myself... I'm still only partly free to be myself, like Washington Black". 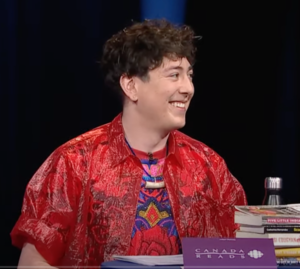 Michelle Good's Five Little Indians, defended by Ojibway journalist and Vogue fashion writer Christian Allaire, and the only book to have thus far received no elimination votes at all, was up next.

"I've seen firsthand how residential schools have effected our community," said Allaire. "But I've also seen our people rise above this trauma." He shared that his own grandmother was a residential school survivor, who "never spoke of her experiences". Allaire argued that Good's acclaimed novel poignantly reveals "the struggles Indigenous people face in simply existing and [Good] ponders what's needed for us to move forward as a national community." 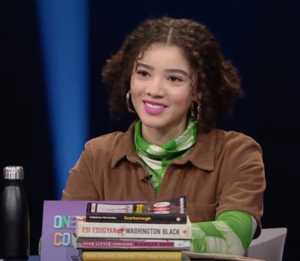 The final panelist still in the fight was actor and activist Malia Baker, defending Scarborough by Catherine Hernandez. Baker was strategic in her remarks, noting to each individual panelist the aspects of Scarborough that they had spoken positively on in the previous two days of competition, reminding them how they, in their own words, have connected with the book.

The next question, open to all the panelists, was "which book made you feel like it's possible for us to overcome our differences?"

Hadhad picked Scarborough, praising the novel's ability to help him "think more brightly, more positively". Allaire argued that the positive outcomes for the characters in that novel sometimes felt "happy go lucky the whole time," saying "I don't think that's an accurate representation", and adding that he wished it was.

When the focus shifted to Washington Black, Baker noted she had an issue with that fact that the character of Washington was only able to achieve respect and the overcoming of his socially constructed limitations through "a colonial lens", with white characters being the ones to decide how much success he would be allowed to earn. Forest ecologist Suzanne Simard, who had defended Life in the City of Dirty Water by Clayton Thomas-Müller before it was voted off on Monday, spoke to Washington Black on a different tack, focusing on two characters whose queer relationship was only subtly alluded to, in keeping with the bigoted attitudes of the historical setting. "I'm actually a gay woman myself," she said, noting that there is much that hasn't changed for queer people today, long after the time of book's setting, and referencing Tewksbury's earlier point about the inability for gay people to be their true self in many places and situations. She finished, saying "I hope we as a society can overcome those differences and see everybody as whole."

Hassan then posed the final question of the first round, asking "which book's exploration of home... was the most compelling?"

Baker responded to Allaire going to bat for Five Little Indians, saying that being from close to the area in which the book was set allowed her to imagine the setting but that she otherwise found it less successful in its descriptions than Washington Black. "You could literally taste what's in the air," said Baker, in reference to Washington Black, comparing it favourably in terms of vivid description in contrast with Five Little Indians.

Hadhad picked up on a point of Tewksbury's that "home is about freedom", saying he found home to be an emotional place more than a location, and even musing that "probably home can be a book".

He too took issue with some of the stylistic choices in Five Little Indians, saying "the book was a little flat and the writing was distracting" at points. He was more neutral on Washington Black, saying he found the character of Washington "confused" until a certain point in the novel, at which point much was clarified for him.

Tewksbury agreed with the assessment, saying Washington wasn't ready until that point to clarify his own feelings. "You can't find home in the world," he said, "until you find it in yourself".

Simard was a heartier defender of Five Little Indians, referencing points in the book that showed the connection between homecoming and healing. "There was no book amongst them that did that better," she said. She had warm words for Scarborough as well, praising a particular character she'd loved, saying "she created a home out of the most extreme poverty, and difficult situation, you could imagine."

With the round wrapped up, messages of support from past Canada Reads panelists were played, with 2016 winner Clara Hughes, 2015 winner Cameron Bailey, 2002 winner Steven Page, 2015 finalist Lainey Lui, 2017 winner Humble the Poet, and 2020 finalist Kanieehtiio Horn weighing in on what it takes to succeed in the debates.

Hassan's next question was about which book was most compelling in showing a character push through difficult circumstances through personal fortitude. Tewksbury shared a powerful personal story about being an adopted child and having an experience that closely mirrored one in the book had by the character of Washington, and the fortitude required to decide for oneself who you are independent of biological history.

Allaire spoke to the strength of Five Little Indians' ensemble cast, which shows a realistic range of responses to trauma and varying versions of what fortitude can look like.

Baker spoke to a particular character in Scarborough who put her job and safety on the line to offer support, including tangible things like food, water, and blankets, and focused on how that was fortitude poignantly displayed by Hernandez.

Hadhad and Simard, as free agents, were allowed to go to bat for any remaining title they liked, and they both cited Five Little Indians as the book that displayed fortitude most compellingly. Hadhad though hedged his response a bit however, saying that though he loved the depictions of fortitude amongst the characters, he found some plot points "hard to even imagine" and that "there was a wide variety of phrases and epitaphs for the adult characters" that didn't quite work for him.

The final question, which was inspired by Hadhad's quip the previous day that "hate is the cancer, love is the answer", asked panelists to decide which book depicted love most movingly. 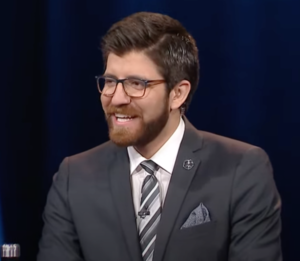 Simard picked Scarborough for one particularly impactful mother-son relationship, with Baker eloquently echoing her sentiments, while Tewksbury noted the nontraditional but essential love Washington had for his artistic process. Allaire praised Good's depiction of the "love that the Indigenous community has had to form for itself [because] there has been no outside love". Hadhad stayed neutral and praised each book but admitted the question wasn't one that would be a deciding factor for his vote. As the voting began, Hassan noted Hadhad was, as he has each day, thoughtfully taking his time to decide. "It's a responsibility, I really want to do it justice," said Hadhad, after submitted his vote. "This was the hardest vote for me."

Once all the votes were announced, there was a tie, at two votes each, between Five Little Indians by Michelle Good and Washington Black by Esi Edugyan. According to Canada Reads rules, a tie must be broken by whoever didn't vote against either of the tied books, even if they are defending one of the books in the tie, meaning Christian Allaire was responsible for the tie breaker. Allaire, as the defender of Five Little Indians, obviously voted against Washington Black by Esi Edugyan, eliminating it from the competition. This means he will go head to head with Baker tomorrow to see whether the 2022 Canada Reads champion will be Scarborough or Five Little Indians.

The debates will resume at 11:00am ET tomorrow, when a final winner will be crowned. You can tune in each day at 11:00 am on CBC Radio One and 1:00pm ET on CBC TV and CBC Gem, and via live stream at 11:00am ET on CBC Listen and CBCbooks.ca. Stay tuned for more coverage on Open Book, and check out our interview with all five panelists.