Day Two of CBC Canada Reads 2022 has now wrapped, with just three books remaining to vie for the crown during the final two debates tomorrow and Thursday respectively.

As the now-seasoned panelists settled in, Olympian and LGBTQ2+ advocate Mark Tewksbury, who is defending Washington Black by Esi Edugyan, noted how appropriate the first day had been in relation to this year's theme ("One Book to Connect Us"): When host Ali Hassan asked the panelists on Day One to choose a book, other than their own, to praise for showing how a small act can be the start of something big, each panelist chose a different book – meaning that all the books in the competition have been enthusiastically praised by someone other than their champion.

In terms of voting, the spread was similar: On Day One, each panelist chose a different book to eliminate, with entrepreneur and former Syrian refugee Tareq Hadhad, who is defending recent Giller winner What Strange Paradise by Omar El Akkad, breaking the tie and eliminating Life in the City of Dirty Water by Clayton Thomas-Müller, which was eloquently defended by forest ecologist Suzanne Simard. The only book to receive no votes against it was Michelle Good's Five Little Indians, defended by Ojibway journalist and Vogue fashion writer Christian Allaire.

As they warmed up, the panelists also connected on the experience of reading all five finalist books in three months. With war, trauma, violence, racism, and other difficult subject matter covered between the five, Allaire remarked ruefully "it was an intense journey... there were a lot of emotions!" 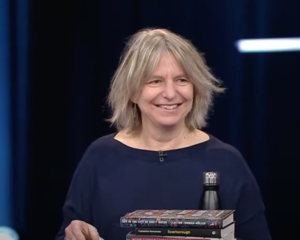 The debates kicked off with a chance for Simard to praise Thomas-Müller's acclaimed memoir before the competition moved forward with just the remaining four books. She was passionate in her response about the environmentally-focused book, saying that Thomas-Müller's work proves "there is no justice without environmental justice" and that "it is Indigenous wisdom, combined with western science, that is going to save us from climate change." 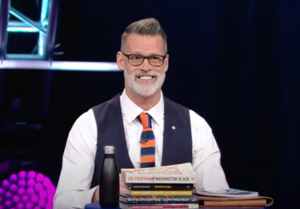 To begin, the other panelists were each given the usual 60 seconds to pontificate on what makes their title "a great book", starting with Tewksbury.

Hadhad, also responding to Washington Black, took what were perhaps the first sharper swipes of the competition, calling the novel "disjointed [and] artless". A gob-smacked Tewksbury defended his writer with a reference to his Olympic experience, saying, "to say that Esi is artless – I don't accept that. Esi [Edugyan] is the Michael Phleps of writers."

Hassan moved to Allaire for a response, who joined Simard in praising Washington Black, calling it "one of the most vivid" books, but taking issue with the novel's structure.

Next to weigh in was actor and activist Malia Baker, defending Scarborough by Catherine Hernandez who agreed with Allaire on the book's vivid writing, saying "I could taste things, I could feel things". She had a less positive view on some pacing and plotting issues however, noting that for her, the plot "seemed to almost dissolve". 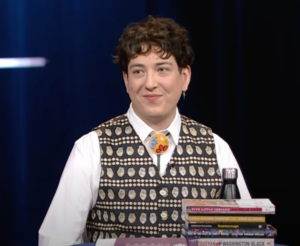 Allaire had a chance to pitch Five Little Indians next, and praised the novel's content and form, noting that its "braided narrative...reflects a circular, more Indigenous approach to storytelling". Simard could be seen nodding along enthusiastically during Allaire's speech.

Hadhad called the novel "an incredible book. The problem for me was I did not lose myself in [it]". Simard said "the writing was sparse, but it made us feel more connected to the characters; it was interesting how she did that... it made me cry, it was the one book that brought me to tears. It made me laugh, it made me writhe in pain... I think it's a book all Canadians should read, maybe people all over the world should read [it]."

Baker came in next, saying "I think everyone should read this book." She queried the lack of hope and closure for some characters and storylines, but was effusive about the book's importance.

Tewksbury started off his critique by thanking Good for writing the book, but confessed he had a hard time imagining the settings, not feeling they were well described, and that he found some of the characters flat and uncomplicated. However, he too praised Good's essential storytelling saying "I think this should be curriculum".

After the intensity of debating two of the remaining titles, there was a bit of a breath in the form of recorded messages from the authors for their panelists, telling them how they might celebrate together if their title was to win. From Esi Edugyan's dreamy offer of a helicopter trip to dine near a glacier to Omar El Akkad's tongue-in-cheek promise to leave Hadhad alone forever and never make him discuss What Strange Paradise again, the authors' messages visibly relaxed the panelists, giving a quick reprieve before the debates continues with Baker's defence of Scarborough. She praised Hernandez's economy and impact, saying "every sentence is used – no words are wasted". 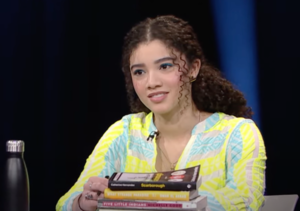 "Everyone has felt unseen at some point," she said. "To see these characters make themselves be seen is almost contagious."

Allaire, who voted against Scarborough the previous day, had warm words for the setting and vibrancy of the novel but felt the large cast of characters left many feeling undeveloped. Tewksbury was gentle in his critique calling the narrative "a bit disjointed" and laughing that he was overwhelmed when eight new characters were introduced in rapid succession. But he praised the characters, the power of the story, and Hernandez's ability to make the most of her background as a playwright.

Hadhad was mostly positive saying "I loved Scarborough... it doesn't only tell the story of Scarborough but of many communities... it was a gripping page turner for me." He agreed on the issues of characters sometimes lacking development, and called the writing at times "a little bit clunky". 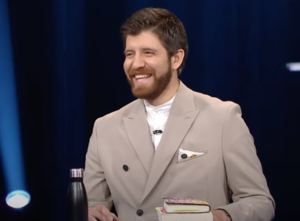 He soon had his chance to speak on behalf of his own book, What Strange Paradise, calling it "a remarkable journey... powerfully written [with] vivid scenes and dazzling structure."

Tewksbury responded first, saying "I love Omar, listening to him joke with you," but noted he found the book a bit cynical, calling it "true... realistic, but not hopeful".

In her response, Simard said she found the book "beautifully written" saying many phrases made her pause and think, adding that "the dialogue was brilliant". She added though that after some time she found it a bit like "a Hardy Boys book" in its action and mystery structure.

Baker said "you can see the passion" behind the writing, but found the characters distant at times and difficult to connect with.

Allaire agreed with much of Tewksbury's critique, finding the bond between the central characters hard to buy and called the structure "exciting" but "formulaic".

And with that, it was time to cast votes, with Hassan noting that both Simard and Hadhad looked particularly thoughtful and took their time voting.

Simard was the final one to read her vote, adding her vote to eliminate What Strange Paradise to votes for the same title from Tewksbury and Baker.

Hadhad gracefully accepted the results and praised El Akkad's book in the final moments, speaking to its thoughtful depiction of the refugee experience. "I hope that the cause for refugees, and supporting immigrants and those leaving their homes will continue to be a priority for Canadians, because I truly believe in the big hearts that Canadian have.... I'm obviously disappointed... but I'm really happy that such a powerful book has made it to Canada Reads so that Canadian are more aware about the topic." He also committed to donate copies of the book across the country, which he had previously said he would do if What Strange Paradise won the competition.

Notably, no votes were cast against Five Little Indians for a second day.

The debates will resume at 11:00am ET tomorrow, continuing on Thursday, when a final winner will be crowned. You can tune in each day at 11:00 am on CBC Radio One and 1:00pm ET on CBC TV and CBC Gem, and via live stream at 11:00am ET on CBC Listen and CBCbooks.ca. Stay tuned for more coverage on Open Book, and check out our interview with all five panelists.