This probably goes without saying, but **Spoiler for Canada Reads 2022 Winner!** 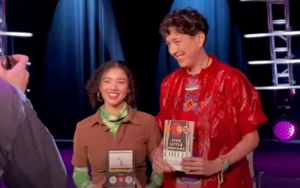 The fourth and final day of debates kicked off with host Ali Hassan recapping the prior debates, including the dramatic tie on Wednesday that saw Washington Black and Five Little Indians tied with two elimination votes each.

Tewksbury offered a good summation of the debates thus far, noting that the debates this year focused not only on the subject matter of the books, as has often been the case in past years, but also the craftsmanship, including "the characters and settings and stories... I feel like we had such a robust book debate". The close attention paid to literary technique has been an interesting shift this year. 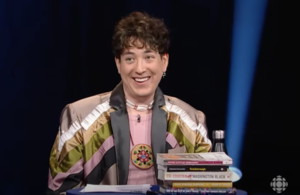 As the debate opened, Allaire and Baker were quick out of the gate. In their respective 60 second openings, they were each passionate. Allaire referenced the current trip, undertaken by residential school survivors, to demand an apology from the Vatican for the horrific crimes committed at Church-run schools. "This book does what all Canadians should be doing at this time," said Allaire, "which is learning and teaching the true history and understanding the impacts today." He also linked the book's themes to the books that had already been voted off, connecting with the free agents whose votes would be essential for the eventual winner.

Simard had perhaps been Five Little Indians' biggest supporter this week apart from Allaire, and she stayed true to that, with a passionate discussion of Canada's genocidal history and the need to understand both the horrors that transpired and their current legacy. 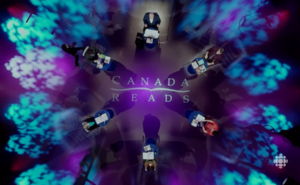 Baker opened her remarks by sensitively acknowledging the difficulty of arguing against a book that covers what is arguably the most essential issue in Canada at the moment, saying "we do have to remember we're talking about a book, and it's okay to offer critique", separating her literary critique from that of subject matter. Baker critiqued some of Good's literary choices, saying she didn't necessarily know who the characters were "outside of their trauma", and that she, as a reader, was looking for deeper characterization from Five Little Indians. In her defence of Scarborough, she shared that it "changed her mindset" and helped her empathize even more widely, saying the book can help readers move beyond "an 'us and them' frame of mind [and help us] take the next steps towards healing in this country".

Hadhad called Scarborough "important... an eye-opener, a page turner". Tewksbury said "Scarborough really did help me see things differently" and shared an anecdote of being pulled over by police and how when he felt nervous, he couldn't help but imagine how much more anxious the characters in Scarborough, who don't share his white privilege, would feel. Simard praised the community focus of Scarborough, for "putting a human face" on the issues of racism, poverty, and institutional inequity.

Allaire noted that he found Hernandez's choice to shift between third and first person distancing as a reader, and mentioned that he found one Indigenous character particularly "surface level" and "obvious".

With the first half of the debate wrapped, there was a break for a Canada Reads tradition: messages of support for each of the remaining finalists. First, iconic Canadian fashion journalist Jeanne Beker gave a message of support for Allaire. Allaire, as a successful fashion journalist himself, was a fan of Beker's as a child, and seemed delighted by Beker's warm message.

Next, Baby-Sitters Club actor Momona Tamada had kind words for Baker, who also stars on the Netflix show. Tamada told a visibly moved Baker, who, at 15, is the youngest panelist to ever appear on Canada Reads, that she felt there was "no one better to represent [their] generation".

Hassan posed the next question of the debate, asking which book was best as bringing readers inside the "hearts and minds" of its characters. 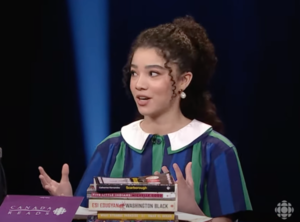 Baker cited Hernandez's strength at dialogue, reminding readers that Hernandez is a playwright and was able to draw on that background to create strong voices that helped readers connect. Baker contrasted Scarborough's strong dialogue with that in Five Little Indians, saying "I felt the dialogue took me out of it... it felt very inaccurate to how people speak day to day".

Hadhad critiqued Scarborough's large cast, calling it "busy" and difficult to connect with each one deeply in respond to Hassan's question.

Hassan then directed a question to Allaire asking how his book is "better at revealing our shared humanity".

Allaire acknowledged that it may seem impossible to relate to a residential school survivor, but said "this book manages to do that... [sometimes] people are afraid to ask [survivors] about their experiences, or just don't want to go there... but Michelle makes you relate to them." He cited Good's ability to use humour to break down the seemingly insurmountable divide between survivors and those who have not experienced that kind of trauma. "I think we all use humour to cope, that's a very human thing, it's a very Indigenous thing".

Baker acknowledged the importance of Good's book but suggested the most appropriate way to get its message out would be to include it in national curriculum.

Wrapping up his defence of Five Little Indians, Allaire spoke to reconciliation, saying "I know a lot of people don't want to assume the guilt. It's not about that – it's about us coming together as a country to acknowledge this happened and helping us move forward all together".

Moving to focus on Scarborough, the panelists largely praised the novel with Hadhad praising its "compassionate, community, [and] kindness" and even Allaire noting it "beautifully illuminated" challenges facing educators in low resource neighbourhoods and noting a character he particularly connected with.

Final messages of support were offered to Allaire and Baker prior to the voting, with recorded messages for Baker from her younger sister Ivory and children's author Ashley Spires, and for Allaire from his mother Nancy and Chief Scott McLeod of Nipissing First Nation, who told Allaire he brought "much pride to our nation... you are a Nipissing warrior".

As Hassan revealed the votes, it became clear that Scarborough was out, with votes from Allaire, Tewksbury, and Simard respectively. For transparency, he also revealed Hadhad's vote, which was also to eliminate Scarborough, making Allaire, and Five Little Indians, the 2022 winner.

Good was standing by for a video call with Allaire, thanking him for his great defence of the book and calling him "you gem you, you perfect young man... I'm so thankful for the work you've done this week... it was tremendous." She also warmly referenced her promise to take Allaire out to dinner in New York, which Allaire lives and which Allaire promised to share photos of.

Baker was gracious, saying "Catherine [Hernandez], we've come so far! I feel really good about it". Tewksbury praised her, calling her "remarkable" and telling her to hold her head "more than high".

Allaire acknowledged how difficult it had been to speak all week on the subject of residential schools, but called Five Little Indians "an easy first step... the most beautiful version of that" for those seeking to educate themselves on the subject.

Both Good and Allaire will appear on Q at 11:00 am on CBC Radio One tomorrow morning. For more Canada Reads goodness until then, check out our interview with all five panelists.