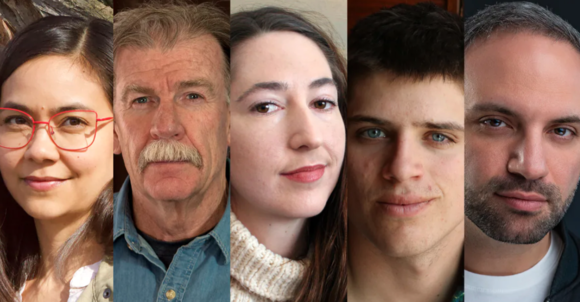 This morning, CBC Books announced the narrowing of their 33-writer longlist to the final five writers contending for the coveted CBC Short Story Prize.

Three nominees from Ontario, one from Saskatchewan, and one from British Columbia will wait to hear who takes the $6,000 grand prize (which also includes a two week residency at the Banff Centre for Arts and Creativity). One nominee, Brooks McMullin from Prince Albert, Saskatchewan, has already been in this exciting position once before, when he was featured on the 2012 shortlist. The winner will be announced on April 29.

With diverse subject matter ranging from pregnancy loss to the Palestinian diaspora, the nominated stories offer a range of styles and literary aesthetics from five exciting writers.

The finalists were selected by jurors Souvankham Thammavongsa, Craig Davidson, and Lee Maracle from the longlist put together by readers drawn from the writing and publishing community.

You can learn more about the finalists and the prize on the CBC Books website, where all five stories are also available to be read for free.