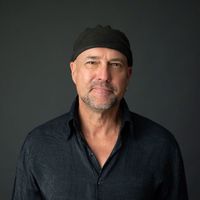 CanLit doesn't have a reputation for hilarity, but the third book from North Bay based writer Rod Carley, Grin Reaping (Latitude 46 Publishing), is more evidence that our supposedly serious rep needs some updating.

The connected short stories of Grin Reaping follow the Boyle family through adventures both spectacular and quotidian, with Carley's signature wit bubbling throughout. Unafraid to turn a comedic lens on death, mental health, conspiracies, and pain, Carley performs a high wire act with ease, revealing how our most serious life events can, from some angles, feel delightfully absurd, while our smallest moments can be quietly heart-rending.

Grin Reaping has been praised by Leacock Medal for Humour nominees and winners like Terry Fallis, Amy Jones, and Susan Juby for its laugh out loud funny writing, witty send up of "rural absurdities", and wry, thoughtful examination of mortality. Carley earned a Leacock nomination for his second novel, Kinmount, and has clearly only grown his wit, sharp eye, and comedic timing in Grin Reaping.

We're excited to speak with Rod today about the book as part of our Keep if Short series for short story writers. He tells us about the American literary icon whose work inspired him as a teen, explains how camels with Botox and our supposed lizard overlords became part of his inspiration for the stories, and shares the moving reasons for his choice of dedication. 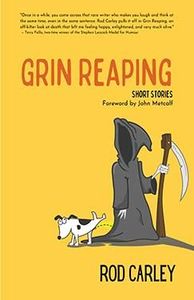 When I was nineteen, my thirst for knowledge and my love of books consumed me. J.D. Salinger’s fictional Glass family were heroes for me at this age – quirky role models living in their New York City apartment on the Upper East Side. I wanted to be an actor like Zooey, a writer like Buddy, and a guru like Seymour. These of course were not the career paths being pushed by my high school guidance counsellor. Unlike the Glass family with its brood of seven children, Salinger only had one elder sister. He wrote his Glass stories to fill that void. I have one younger brother. As both a critic and creature of the human predicament, I wrote this interconnected collection of short stories to expand my sense of family and examine the absurdities of LIFE. Over the five years it took me to write the stories, both my parents died and I lost a couple of good friends. Death, loss, and grief gradually became the bedrock for the collection – underlying my observational humour and becoming the source for the wordplay of the book’s title – that cowled figure with the scythe – Grin Reaping.

The stories are told from the point of view of Rudy Boyle, a frustrated college English teacher, stuck both in middle-age and in the middle of his five siblings – Larry (a retired Northern Ontario railroader), Evie (a Jungian analyst), Jonah (his fraternal twin), JoJo (a YA fiction writer), and Nicky (an accident-prone daredevil). Rudy translates the strangeness of his and his family’s everyday life into hilarious home-movie prose. He is the axis around which the fourteen stories revolve. Exaggerating small and mundane situations into comic celebrations of the life of the mind, Rudy never lets the truth get in the way of a great story. His reminiscences deal not only with the absurdities of human nature, but also encompass the grief of losing loved ones. Rudy is bedeviled by neurosis, and cowed before the insignificant things in his world. He talks largely about small matters and trivially about great affairs. It is the nature of his dilemma and the dilemma of his nature.

I deliberately wrote the stories as a book with the heft of a novel.

I grind my teeth at night and, as a result, wear a mouth guard when sleeping, er, when attempting to sleep. One of the stories, Botox and the Brontosaurus, grew out of my late-night, molar-grinding insomnia. When I was preparing a Grade Six science fair project, I read about how the brontosaurus grinded its teeth. I also came across a news story in The Guardian about a small caravan of camels being disqualified from a beauty contest in Saudi Arabia because a vet injected their snouts with Botox to give them a more alluring pout. The brontosaurus and Botox triggered my over-active imagination. I researched the dental regimen of the brontosaurus as well as the effects of Botox injections on teeth grinding. I channeled my research through Rudy’s neurotic mind and it mashed together nicely to become another of his tall tales.

I enjoyed poking fun at conspiracy theorists in The Land of the Lizard-People. Why do otherwise rational individuals make the leap to such illogical belief systems? 12 million Americans believe alien lizards rule us, as do millions of Canadians. I was shocked to discover that I knew someone within my social circle who actually believed that blood-drinking, shape-shifting interstellar lizards in human suits ruled our country. Truth will always be stranger than fiction.

Do you have a favourite short story collection that you’ve read? Tell us why it is special to you?

The only book I’ve read ten times (or more) is J.D. Salinger’s Nine Stories. It helped me understand what a story collection was, and should be. It reminds me of those pencil marks on the wall, recording childhood height: a way to measure how we become different people, over time. From the outside, the stories are often very funny; inside, they are about heartbreak and loss of innocence. The whole nine have a magical ease about them, a deceptively loose-appearing structure, and a mystical grace. There is not a trace of sentimentality.

Grin Reaping is in part dedicated to my good friend John Batchelor who died tragically at the age of sixty due to the monster mesothelioma. John read the stories in their first incarnation and provided honest feedback. He was looking forward to the release of the collection. Sadly, he never lived to see it. So, these stories, are in some way for him.

The collection is also for my brother Greg. When we were kids, he cut my half of the lawn so I could read. My brother personifies generosity. He also manages to recreate our late mother’s apple pie recipe to such perfection that I swear our mother is sitting in the kitchen with us. She probably is.

What, if anything, did you learn from writing these short stories?

As Rudy says, we laugh because there’s nothing we can do about it. That and fitted sheets were invented by lizard-people to conquer the human race.

Rod Carley’s second novel, KINMOUNT, won the Silver Medal for Best Regional Fiction from the 2021 Independent Publishers Book Awards and was one of ten books longlisted for the 2021 Leacock Medal for Humour. His first novel, A Matter of Will, was a finalist for the Northern Lit Award for Fiction. His short stories and creative nonfiction have appeared in Cloud Lake Literary, Blank Spaces Magazine, Broadview Magazine, the anthology 150 Years Up North and More, the Carter V. Cooper 2022 Short Fiction Anthology, and HighGrader Magazine. Rod was short-listed for 2021 Exile Quarterly’s Carter V. Cooper Short Fiction Prize. He is an alumnus of the Humber School for Writers and resides in North Bay, ON.

Grin Reaping catalogues the foibles of the fictional Boyle family. In a series of fourteen interconnected short stories and musings, Rudy Boyle, a Northern Ontario college English teacher stuck both in middle age and in the middle of his five siblings, transforms the strangeness of his everyday life into exaggerated home-movie prose. From the significance of tuna fish and Botox, the threat of coyotes and aliens, to the big-ticket items of mortality, gender, climate change, and Armageddon, Rudy tackles a range of topics with a wry, self-deprecating wit. As he variously shares such snippets, he exaggerates small and mundane situations into comic celebrations of the life of the mind, never letting the truth get in the way of a great story. His reminiscences deal not only with the absurdities of human nature, but also encompass the grief of losing family. Rudy is bedeviled by neurosis, and cowed before the insignificant things in his world. He talks largely about small matters and trivially about great affairs. It is the nature of his dilemma and the dilemma of his nature.