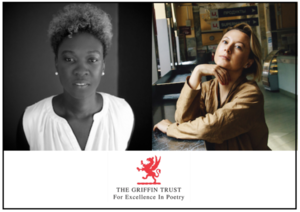 It is truly Canisia Lubrin's year. Her powerhouse poetry collection, The Dyzgraphxst (McClelland & Stewart Ltd.), has captured her yet another massive honour today: the Canadian Griffin Poetry Prize.

The $65,000 prize marks Lubrin's latest distinction, but she has also recently earned numerous other awards, including the Windham-Campbell Literature Prize and the OCM Bocas Prize for Caribbean Literature, as well as nominations for the Governor General's Literary Award and the Trillium Book Award.

Lubrin, who was born in St. Lucia and moved to Canada, later attending York University for undergraduate studies and the University of Guelph for her Masters degree, published her first collection of poetry, Voodoo Hypothesis, in 2017. She was recently appointed as the Poetry Editor for McClelland & Stewart, the publisher of The Dyzgraphxst.

Along with Lubrin, it's an excellent day for Belarusian poet Valzhyna Mort, whose collection, Music for the Dead and Resurrected, was awarded the International Griffin Poetry Prize. Mort, now based in the United States, has been turning heads in the poetry community since her first, award-winning collection, I'm as Thin as Your Eyelashes was published in 2005. The Canadian and International prizes carry the same award, with Mort also receiving $65,000 for her win.

The remaining finalists for the country's biggest poetry award will receive $10,000 each. They are Joseph Dandurand for The East Side of It All (Nightwood Editions) and Yusaf Saadi for Pluviophile (also Nightwood Editions) for the Canadian prize; and American poet Victoria Chang for Obit, Indian-American writer Srikanth Reddy for Underworld Lit, and translator team Tracy K. Smith and Changtai Bi, who translated the late Chinese poet Yi Lei's My Name Will Grow Wide Like a Tree, for the International prize.

To learn more about all of the nominees, you can read our interview with them, where each writer discusses his or her writing process, favourite themes and images, and the experience of being nominated.