In Carolyn Huizinga Mills' new novel, Sins of the Daughter (Cormorant Books), Danah Calsely is doing just fine. She's working diligently towards her PhD and her life is calm. The fact that her mother abruptly abandoned her when she was just nine years old doesn't matter now that she's a successful adult.

But when Danah comes across a mysterious letter she is sure was written by her missing mother, the decades of healing and denial fall away and Danah finds herself obsessed with delving back into her mother's disappearance and getting the truth that she was never given as a child. She finds herself butting heads with her grandmother Edith, who has no desire to reopen old wounds. Whether her grandmother is protecting her or withholding information essential to understanding herself, Danah doesn't know, but she's prepared to risk everything to find out.

A fearless, intense, and insightful examination of mothers and daughters, families and secrets, Sins of the Daughter is a taut and wise book that spirals its readers through unmissable twists and turns while staying grounded in complex and fascinating character studies. We're excited to be speaking with Carolyn today about the novel, which is her second adult book (she is also an acclaimed picture book writer).

She tells us about how a sentence that isn't in the book is paradoxically one of its most important passages, her deep connections to the book's many vivid settings, and her brilliant (and very tasty) writing hack that you may be tempted to adopt for yourself. 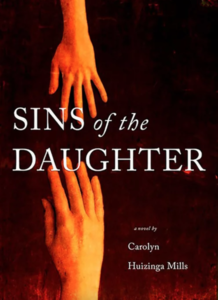 I originally started Sins of the Daughter with a sentence that for a long time I was stuck on keeping as the opening line, probably because it was the spark that started it all. That sentence was something along the lines of: “It was two days before the fire that she saw the letter.” I had no idea who “she” was or what this ill-fated letter was about, but I was intrigued enough to keep writing. There were many, many versions of this story over many, many years before the one that finally evolved. The sentiment behind that original sentence is still there, and it still serves as the spark that ignites the rest of the story, but the sentence itself is long gone. More importantly, it’s no longer where the story begins.

There are multiple settings in this story: Vancouver, Guelph, Hamilton, Missionville (a fictional farming town in southwestern Ontario), and Edinburgh. I was at a conference in Vancouver during the early phases of drafting this story so I drew inspiration from many of my experiences there. I remember going to Granville Island and knowing that one of my characters was going to have a connection to art – I just didn’t know who or how. Guelph and Hamilton were chosen because of their universities (rather arbitrarily), although I’d worked in Residence Life at McMaster so I knew the campus and surrounding area. Mostly I was drawn to the historic charm of their campuses, which my alma mater, the University of Waterloo, was lacking. Also, I felt choosing the university I attended might be construed as somewhat lazy, or at the very least, unimaginative. The fictional town of Missionville is loosely modelled after Dunnville, the small town I moved to when I was twelve; the farm in Missionville is not so loosely modelled after my aunt and uncle’s farm (on the outskirts of Dunnville), where I spent many memorable hours. Edinburgh is a city close to my heart. Throughout my travels, Edinburgh remains one of my favourite places to have lived and worked (I never got over my awe of Edinburgh Castle). I didn’t know that city would become part of my story until much later in the process, but writing the scenes that take place there was a welcome chance to revisit it through photos and memories. It also made the coffee table book I bought rather impulsively just before I left in 1999 well worth however many pounds I paid for it.

For the longest time (years), I didn’t have an ending. I had this manuscript that I kept returning to, but could never seem to finish. It meandered all over the place. Then I did a webinar that promised to teach me how to “finish my draft in 30 days”. And it worked! I finally, finally figured out how the story ended. For the first time, I had a complete draft in my hands. After countless rounds of revisions, the actual ending stayed the same, but many of the details leading up to it changed significantly.

One key element I needed to research was Danah’s role as a Sociology Ph.D. candidate. Fortunately, I had a friend who had been there and done that so I relied heavily on her experiences. I also toured the sociology building at McMaster and met with the director of the Honours Social Psychology Program. She read a version of the manuscript and gave me specific academia-related feedback, which was invaluable. I also spent a bit of time writing in the university library, which led to a very specific description of two undergrads hijacking Danah’s favourite study window on the fourth floor.

The most memorable moment was hearing my publisher say he was interested in acquiring the story. I wasn’t sure I understood him correctly and spent the rest of that day in a haze of disbelief and giddy excitement.

I celebrate the tiniest of milestones! When the writing is slow and the words don’t want to come, I reward myself with M&Ms. One for every fifty words. I’ll set a goal for 500 words and count out 10 M&Ms. It’s surprisingly motivating.

I dedicated Sins of the Daughter to my husband because he has always been my biggest supporter. I joke that he took my writing seriously before I did. He encouraged me in so many ways to follow my dreams and gave me the extra push when I needed it to invest in myself and this story.

Ever since reading L.M. Montgomery’s Emily of New Moon as a child, Carolyn Huizinga Mills has dreamed of being a writer. She began writing short stories and in 2017, her story “Finders” placed second in the Alice Munro Short Story Competition. Carolyn’s first picture book, The Little Boy Who Lived Down the Drain, was chosen as a 2018 Blue Spruce Honour Book. Her second picture book, Grandpa’s Stars, is forthcoming. The Good Son was her first novel.

Sins of the Daughter

Danah Calsely was only nine when her mother abandoned her. Years later, as a promising Sociology PhD candidate, Danah appears largely unaffected by this traumatic loss — until she finds a letter that she’s convinced is from her missing mother. The truth about Jane Lily and her disappearance is wrapped in a long history of silence, and Danah’s grandmother, Edith, has no interest in rehashing the past.

Danah becomes obsessed with the letter and the secrets she believes Edith is keeping from her. Edith is convinced she’s only protecting her granddaughter, but she has her own reasons for staying silent. As for Jane Lily herself, she has a certain knack for disappearing.

A story of heartbreak and hope, guilt and redemption, Sins of the Daughter explores the fragility of the bond between mothers and daughters and the domino effect that the choices of one generation have on the next.