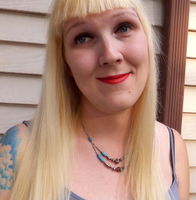 Last night at a ceremony in Toronto, Casey Plett captured the prestigious Amazon Canada First Novel Award for Little Fish (Arsenal Pulp Press). The author of a previous short story collection, A Safe Girl to Love, and co-editor of the anthology Meanwhile, Elsewhere: Science Fiction and Fantasy from Transgender Writers, Windsor-based Plett is widely published, with work appearing in the New York Times, Maclean’s, The Walrus, and numerous other outlets.

She's also racked up several honours prior to the Amazon, including a Lambda Literary Award for Best Transgender Fiction and an honour of distinction from the Writers Trust of Canada’s Dayne Ogilvie Prize for LGBTQ Emerging Writers.

Judges Doretta Lau, Dimitri Nasrallah, and Diane Schoemperlen praised Little Fish and all the shortlisted works, with Schoeperlen saying, "With so many great books to choose from, I have come away from the judging process feeling more confident than ever before that the future of the Canadian novel will continue to be vibrant, passionate, and always illuminating."

The prize, which celebrates excellence in a first novel, comes with a $60,000 prize for Plett.

It was a great year for Arsenal Pulp Press, who also published one of the other nominated novels, Joshua Whitehead's Johnny Appleseed. Whitehead, in addition to the other finalists - Liz Harmer, Tyler Hellard, Tanya Tagaq, and Ian Williams - each received a $6,000 in recognition of the excellence of their work.

In addition to the main prize, Amazon also presented the Youth Short Story Award (now in its second year), which celebrates authors between the ages of thirteen and seventeen who have written a short story under 3,000 words. Sixteen-year-old Jenniffer Meng won for her short story, “Where Do All the Birds Go??”, receiving $5,000 and a mentorship lunch with editors of The Walrus.