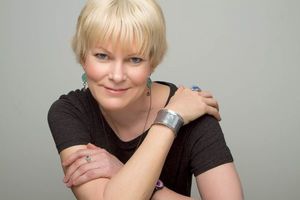 In a world where the impossible has happened, the limitations of everyday logic are suddenly opened. When poet and novelist Catherine Graham was diagnosed with cancer, the world became a topsy-turvy place. She translates this strangeness in her newest collection, The Celery Forest (Wolsak & Wynn), in the most beautiful way possible.

Poet Robert Wrigley called the collection "a book of enacted grace, poetic resourcefulness, and imaginative courage." The Wonderland-like lushness and strangeness of the titular landscape creates a place of memory and survival for people, animals, and birds within the collection's pages, as Graham explores the beautifully odd and the oddly beautiful. Like all of Graham's widely-praised work, the poems here are evocative, balanced, deft, and memorable.

We're thrilled to welcome Catherine to Open Book today as part of our Lucky Seven questionnaire, where we ask writers about their latest books, their writing processes, and more. She tells us about the piece of artwork she stumbled onto that inspired the collection, how the cycle of poet and patient synced up for her, and she shares awesome quotes from Dickinson and Kafka to describe what a great book does.

Four years ago as my fifth poetry collection Her Red Hair Rises with the Wings of Insects was going to print, I was diagnosed with breast cancer. Coincidentally, I was the exact age my mother was when she died of the disease. This was both unsettling and strangely comforting.

Shortly after the diagnosis, I saw a piece of artwork while at the Abbozzo Gallery titled, “With an owl in a celery forest” by Cora Brittan. The image of a girl in a red dress holding an owl at the entryway of a giant celery forest captivated me. To my surprise my partner John bought the mixed media piece for me. It now hangs in our bedroom.

The image of an oversized celery forest in contrast to the smallness of the girl spoke deeply to my health situation. It became a visual way for me to understand something that I couldn’t quite verbalize. One day I started playing with the image through words. Who was the girl in the red dress? Why was she holding an owl? Or was the owl holding her? Out of this exploration came the poem, “Cancer in the Celery Forest.” More poems came afterwards which led to the creation of the book.

I was grappling with the shift in perspective and perception that happens after you’ve been given an unexpected health diagnosis. It’s a time when you realize how thin the veil really is between life and death. Although cancer is part of the book I didn’t want all of the poems to be about that. So the collection is filled with many things including a red-eyed vireo, Siri, glass animals, apple seeds, ghosts, and fireflies.

As my engagement with the Celery Forest deepened more poems came into being. The owl was there from the start but then came other creatures as mentioned above plus a three-legged fawn, a royal mole catcher, and of course, celery. The project didn’t change significantly in theme and scope but each poem was worked and reworked to the best of my ability.

There was an interesting synchronicity with the timing of the project. As my last book went to print I was being diagnosed. As this book was going to print, my oncologist released me from his journey. I had come full circle as both poet and patient.

In addition to a quiet space my needs are pretty simple: paper and pen. All of my poems, the first drafts anyway, are written by hand, usually in a three-ring notebook. I need to feel that my body is part of the process by moving my hand across a page. This seems to access a deeper part of my brain. Once I have something, or what I hope is something, I head to the computer to type it out. Viewing it on screen helps me find its form. Longer lines? Shorter? Three-line stanzas? Couplets? It’s easy to shift things around to uncover the shape the poem needs to be. Through all of this I read the work aloud to access both eye and ear.

There are moments when I feel I’m in the zone—a state of alignment with my thoughts, words, rhythms and images—followed by periods of uncertainty and self-doubt. To help navigate through these extremes I exercise: walking, working out, swimming, yoga. Sharing the highs and lows with my partner and close writer friends helps too. I am grateful for my supportive network.

A great book alters you physically. It does something to your nervous system so you feel as Emily Dickinson described so aptly: “as if the top of my head were taken off.” Your way of viewing things shifts. Your emotions are ignited. The written word becomes more real than the real world. A kind of rewiring happens within and it stays with you. As Franz Kafka said, “A book must be the axe for the frozen sea within us.”

Poems do this too. Instead of two great books I’ll share two poems (though it’s almost impossible to choose only two, there are so many). Two that continue to blow me away are “Snow” by Louis MacNeice and “One Art” by Elizabeth Bishop. Oh, but then there’s “Winter Sundays” by Robert Hayden, “Archaic Torso of Apollo” by Rainer Maria Rilke, “Postscript” by Seamus Heaney. I could go on and on.

In addition to The Celery Forest I published my debut novel Quarry this year with Two Wolves Press. It’s the story of a young girl who lives with her parents beside a water-filled limestone quarry and how she deals with family loss and family secrets as she grows into adulthood. I’ve been busy promoting both of these books with readings, festivals, book clubs, etc. Once that dies down I’ll get back to various writing projects I have on the go—some non-fiction, fiction and of course, poetry.

Catherine Graham is the author of five acclaimed poetry collections, including Her Red Hair Rises with the Wings of Insects, which was a finalist for the Raymond Souster Award and the CAA Award for Poetry. Winner of the International Festival of Authors' Poetry NOW competition, she teaches creative writing at the University of Toronto where she won an Excellence in Teaching Award and at Humber College's Creative Book Publishing Program. Published internationally, she lives in Toronto. Visit her website at www.catherinegraham.com. Follow her on Twitter and Instagram @catgrahampoet.

Like Wonderland or Oz, Neverland or Narnia, The Celery Forest is an extraordinary world filled with strange creatures and disorienting sights. But the doorway to the Celery Forest is not a rabbit hole or an old wardrobe. The doorway is an MRI. For poet and novelist Catherine Graham, this is the topsy-turvy world she found herself in after learning she had breast cancer.

More than a survivor’s tale, these poems are a map through unknowable terrain, infused with awareness and forgetting, written by a poet with the visionary ability to distill our sense of wonder into something we can hold.