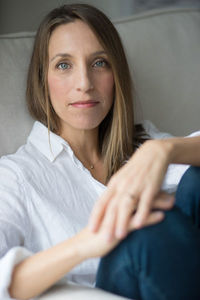 Sarah Selecky's first book, the stylish, wise, and subtly funny story collection This Cake is for the Party, was shortlisted for the Giller Prize in 2010. Since then, Selecky has been busy founding and running her successful online writing school Story is a State of Mind.

This spring she returns with a long awaited second book, a novel this time. Radiant Shimmering Light (HarperCollins Canada) is already being called "moving and transcendent" (Kerry Clare) and "warm, sharp and deceptively light" (Lisa Gabriele).

The book delves into the complex territories of female friendship and online identity, following pet portraitist Lilian Quick as she idolizes her cousin Florence, the face of a popular lifestyle brand. When Lilian enrols in her cousin's expensive but promising self-actualization program, everything begins to change.

It's an incredibly exciting follow up to a debut that made the country take notice of Selecky's work. We're thrilled to welcome Sarah to Open Book today and offer our readers the chance to get to know the beloved teacher and author better through our Dirty Dozen series, where we ask writers to spill some secrets and reveal 12 unexpected facts about themselves.

Sarah tells us about a floral ultimatum that worked out for the best, the tasty homemade refreshment she might offer you at her place, and the other name she might answer to if you try.

The Dirty Dozen with Sarah Selecky

Sarah Selecky’s breakout debut collection, This Cake Is for the Party, was a finalist for the Scotiabank Giller Prize, was shortlisted for the Commonwealth Writers’ Prize for Best First Book, and was longlisted for the Frank O’Connor International Short Story Award. Her stories have been published in The Walrus, Elle Canada, The New Quarterly, and The Journey Prize anthology, among other publications. She is also the creator of the beloved online creative writing school (and MFA alternative) Story Is a State of Mind.

A sharply funny and wise debut novel about female friendship, the face we show the world online and letting your own light shine, from the Scotiabank Giller Prize–shortlisted author of This Cake Is for the Party

Lilian Quick has looked up to her cousin Florence her whole life. Florence is everything Lilian is not—brave, confident, quick to find adventure and American. The women have been out of touch for years due to a family rift, but Lilian, childless, single and self-employed as a pet portraitist, has been watching Florence for years. Florence is now Internet-famous as Eleven Novak, the face of a compelling new feminine lifestyle empowerment brand.

When Eleven comes to town as part of her sales tour, she offers Lilian a place at the Temple, her Manhattan office. Despite twenty years of silence, Eleven welcomes her long-lost cousin with open arms, and the two women begin a new relationship. Lilian quickly enrols in the Ascendency, Eleven’s signature program: an expensive three-month training seminar on empowered leadership, spiritual awakening, and sales and marketing. Eleven is going to help her cousin rise up to be her highest self: confident, affluent and self-actualized.

Lilian’s sensitive, artistic nature is stretched by the work she does in the Ascendency, and pushed even further by her cousin’s careful life coaching. In just three months, Lilian’s life changes drastically and becomes everything she’s dreamed of. But is it everything she wants? And can she trust everything Eleven says?