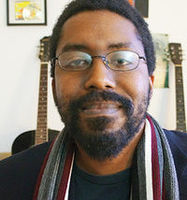 While there is surely a lot of work still to be done, Canadian literature is enjoying a pretty exciting time at the moment. With both large and indie publishers paying greater attention to work by authors from underrepresented communities, readers are being treated to brilliant, original, and challenging books that might not have been lifted up in the same way ten years ago. New voices are being widely heard for the first time, and for those looking for something fresh and exciting, there's no shortage of options.

Amid this new literary climate, critically-acclaimed poet Dane Swan has edited and compiled Changing the Face of Canadian Literature (Guernica Editions), a rich anthology of poetry and prose by a geographically diverse array of Canadian writers representing many different backgrounds, experiences, and perspectives.

We're thrilled to have Dane at Open Book today, where he discusses the tough process of selecting authors for his anthology, how any anthology is only a good as its editor, and the plethora of other writing and editing projects he's currently got on the go.

Tell us about your new book and how you became involved with it.

Changing the Face of Canadian Literature is an anthology of poetry and prose that I compiled and edited for Guernica Editions. It’s an anthology that tries to encapsulate what diverse literature means, in as wide a scope of the term as possible. Contributors represent geographic diversity, cultural diversity, racial diversity, etc. It’s not a perfect anthology, but I didn’t want to use a narrow definition of the word diverse. As for the anthology’s origins, when I was a finalist for the Trillium Book Prize for Poetry in 2017, for A Mingus Lullaby (Guernica Editions), Michael at Guernica pitched the idea of me editing an anthology for them. After some time, I proposed this project.

My priority was to find writers of a high enough standard that represented a diverse geographic scope of Canada. This meant doing a lot of reading, networking, talking to friends, talking to Anna from Guernica, inviting writers, and then repeating the process after people said no, didn’t reply, or missed deadlines. After giving a rough guideline of what the anthology was about, I let contributors write whatever they felt was appropriate. Doing the majority of the work in advance, making sure that contributors were of a certain ilk, meant that I only declined two submissions.

If I did an open call, I’m not sure what the results would have been. My fear was that the collection would have been too Toronto-centric. You could argue that it is a bit too Ontario-centric in contributors already; there’s no one from a Northern territory. But through talking to other anthology editors, doing an invitation-based anthology is the most efficient way to create a collection when the theme is fairly narrow.

I was honestly surprised that so many people submitted work that spoke so clearly to one another. Other than a conversation that I had with (contributor) Daniele D’Onorio, I gave little direction. However, the theme of feeling like an outsider in a community repeatedly came up in the work.

I see the word “instruments” in the question and I immediately think of the fact that I usually have a guitar or some other musical instrument near me when I write. Pretty sure that’s not what you meant! I’ve always valued the importance of writing things down with pen and paper before heading to my computer.

With all of my books, I have a dedicated notebook. If it’s a poetry collection, the first draft of at least two-thirds of the collection will be handwritten. For short fiction, the notebook might just be used to keep track of plot lines; which character is doing what. In either case, I always head to a library to do some research, which takes up a few pages in the notebook. I’ve found with things like SEO websites becoming more prominent, doing real research online has become almost impossible.

The foreword I wrote for Changing the Face of Canadian Literature answers both of these questions in far more detail, and more eloquently than I could state here. In short, I want both authors and readers to celebrate the diversity of voices currently involved in Canada’s literature. There has never been a moment like this in the history of Canadian literature.

The second question is a lot easier to answer than the first, so I’ll start there: There were tons. Many of them I mention in the list of diverse anthologies at the back of the book, but the anthology that I’ll mention here is Surviving Canada: Indigenous Peoples Celebrate 150 Years of Betrayal (ARP Books), edited by Kiera L Lander and Myra J Tait. A friend invited me to the launch. It’s a brilliant anthology featuring academic essays, public speeches, and works of creative nonfiction. Because of its size, it also has a certain presence. I remember thinking, after going to the launch at A Different Book List, “If I ever have the chance to edit an anthology, I want it to be just as big, and filled with just as much brilliant work.” Weeks later, Michael approached me, and I immediately knew that I needed to get a proposal together. You can’t just tell a publisher that you’re going to put together a 400-page anthology!

As far as what defines a great anthology—it comes down to the editor. Does the editor see the project as a job, or a potentially historic piece of work? It’s not even about whether the they’re a good editor, but if they see the collection as something that could potentially become larger than itself -a historic monument- then it can be a great anthology.

During this process, I’ve read a lot of brilliant anthologies. A number of them were edited by regular people who felt inspired to compile poems, or stories, or thoughts from their communities. The mind state of the editor will reflect in the results.

What’s next? A lot! This fall, after Guernica Editions launches Changing the Face of Canadian Literature, Mansfield Press is scheduled to launch my third poetry collection, Love and Other Failed Religions. I don’t plan to have another poetry collection published for a while, so I’m pretty excited to share it. We had a lot planned, but with COVID, I’m not sure if my collection will get the attention it probably deserves.

Once both books are out and promoted, I have a number of fiction projects that I want to work on. Before my daily practice became more about self-care during a pandemic, I was working on a novel and a Young Adult project. I also have a few ideas for a potential short story collection.

I would be remiss if I didn’t mention the website that my creative collaborator and I run, wearestillcool.com. Currently, we have a very small podcast network and a small online magazine where we publish primarily creative nonfiction. Most of the work is ours, but our plan is to publish more writers. The pay is tiny, but if you have an idea that you think fits, send us a pitch! We have a partnership with Dumagrad Books, so when we have enough contributed pieces, the plan is to publish an annual.

Finally, I’ve started to freelance as an editor. I’m primarily interested in working on poetry collections, collections of short fiction, and short creative nonfiction collections. If you think that I can assist with your writing, I’m easily found!

Born in Bermuda, Dane Swan's poetry can be found in anthologies and poetry reviews in the UK, France, Bahamas, and Canada. His first collection, Bending the Continuum, was published in 2011 by Guernica Editions.

Changing the Face of Canadian Literature: A Diverse Canadian Anthology

Needless to say, moments like now, when the hurdles to becoming a respected author are at their lowest. When the only hurdles to being published are the quality of your writing and your patience to deal with certain less and less important gatekeepers. Moments in history like this, must be acknowledged and celebrated. That's what this anthology is: It's a celebration. A moment to cry out, “Look how many of us have a voice! There are stories, and poetry in this country that are about people like me! I am not alone!”