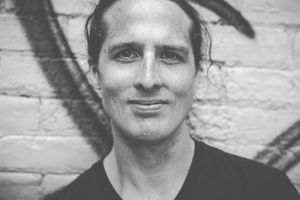 David Huebert has been going from strength to strength recently, gathering successes in multiple genres including both the CBC Short Story Prize and the Walrus Poetry Prize. Now, just two years after the publication of his acclaimed poetry collection We Are No Longer the Smart Kids in Class, he returns with a collection of eight short stories, Peninsula Sinking (Bibloasis).

Peninsula Sinking has been attracting praise since it was published with Robert Wiersma delcaring that the book "establishes Huebert as one of Canada’s most impressive young writers" and Laurie D. Graham saying "Each sentence is alive and crackling. His turns of phrase will catch your breath in your throat. These stories will sweep you up."

We're pleased to have David on Open Book today as part of our Dirty Dozen series, where we ask writers to share twelve unexpected and little known facts about themselves. He tells us about an understanding mix up around hot dogs, his Bachelorette Canada connection, and why cows keep him up at night.

David Huebert: My First Ever Piece of 100% True Creative Nonfiction, or, I Fear Cows

David Huebert is a Canadian writer of fiction, poetry, and critical prose whose work has won the CBC Short Story Prize, the Sheldon Currie Fiction Prize, and the Walrus Poetry Prize, among other awards. David’s work has been published in magazines such as The Fiddlehead, EVENT, enRoute, and Canadian Notes and Queries. His debut short fiction collection, Peninsula Sinking, came out with Biblioasis this fall. David is also the author of the 2015 poetry collection We Are No Longer the Smart Kids in Class.

In Peninsula Sinking, David Huebert brings readers an assortment of Maritimers caught between the places they love and the siren call of elsewhere. From submarine officers to prison guards, oil refinery workers to academics, each character in these stories struggles to find some balance of spiritual and emotional grace in the world increasingly on the precipice of ruin. Peninsula Sinking offers up eight urgent and electric meditations on the mysteries of death and life, of grief and love, and never shies away from the joy and horror of our submerging world.