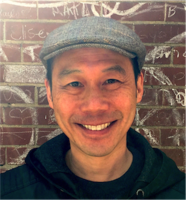 David Kingston Yeh's 2018 novel, A Boy at the Edge of the World was packed with smart, funny, moving moments and characters, especially its protagonist, Daniel Garneau. There was so much to explore in the character of Daniel, a young gay man navigating family, love, and identity in Toronto, that Kingston Yeh found himself drawn back to the story.

Enter Tales from The Bottom of My Sole (Guernica Editions), which functions as both a sequel to A Boy at the Edge of the World and its own stand-alone tale, and which sees the Garneaus meeting Luke, a long-lost family member and young trans man. Luke's presence is part of a series of events that throws Daniel's life, and his relationship with his boyfriend David, into tumultuous waters. Filled with heartening Toronto references (remember Vazaleen?) and thoughtful explorations of love, queer identity, and family, this second instalment is unmissable.

We're excited to welcome David to Open Book to talk about Tales from the Bottom of My Sole. He tells us about his epigraph from Virginia Woolf (one that you'll want to remember), how his work as a counsellor for queer and trans youth has shaped his writing, and the joy of shifting from writing to channeling.

Tales from the Bottom of My Sole is a stand-along sequel to my first novel, A Boy at the Edge of the World (2018), a coming-of-age story told by a young gay man, Daniel Garneau. Halfway through completing A Boy, I realized there wasn’t enough space for me to explore its themes (of sexuality, gender, identity, family) as thoroughly as I wanted. So I ended up writing both manuscripts back-to-back. But I also started this novel wanting to slow down and deepen Daniel’s narrative. A Boy moved quickly, covering five years in Daniel’s life. Tales is a much more reflective and intimate novel, spanning two years. There are also moments where Tales departs from Daniel’s point of view, and touches on intergenerational experiences. In its opening paragraph, I recount how the Garneau brothers have their grandmother’s face tattooed on their bodies. This first bit of writing was an intentional foreshadowing of the novel’s trajectory.

Daniel’s story is set in Toronto in the 2000s, featuring a mostly Millennial cast. I myself moved to Toronto over twenty years ago, and have personal ties to all its locations in the novel: from Vazaleen and Buddies in Bad Times Theatre to Sneaky Dee’s and the CNE. Toronto is where I found community and family, and where I “grew up” as a gay man. Of course, Toronto is also famous as a crossroads, a site of confluence. In the novel’s epilogue, I refer to the liminality that is Canada, a space wherein lives are distilled and new outlooks emerge. In this sense, “coming-of-age” doesn’t merely refer to the psychological and moral growth of one individual, but it also refers to the growth of civil society, as we refigure what it means to be human beings living together in our diversity.

Toronto has always been a crucible for sexual and gender politics. In the novel, I don’t mention J.D.s or The Body Politic or the Bathhouse Raids or SlutWalk or same-sex marriage or transgender rights. But all of these have history with this city, and fuel my research and reflections as a writer. I’ve also worked many years as a counsellor with queer and trans youth. I’ve had the privilege of speaking with hundreds of young people, from all walks of life. Their stories of resilience and hope have humbled and inspired me. I am an adherent of literary realism – except when I’m not. There is enough gay-themed story-telling that is grim, sardonic, or tragic. What was most important to me, as an ethnographer and writer, was to capture the adventure, levity, and wonder of young adulthood.

Daniel’s boyfriend David is Italian-Canadian, and at one point, Tales takes the reader to an extravagant family reunion in Sicily. So I also spent many painstaking hours researching Italia. I hope I do it justice in this book. Perhaps one day I may actually visit the remote Sicilian town of Torretta (where David’s mother Isabella has a chance encounter with a notable Canadian celebrity!).

I include an epigraph by Virginia Woolf from A Room of One’s Own: “No need to hurry. No need to sparkle. No need to be anybody but oneself.” I can’t recall how many times young persons have told me they feel they’ve fallen behind, that their lives are meaningless, or how they’re not living their true potential. Finding our value or truth is not a cathartic moment of fabulousness, bursting out of our closets whereupon henceforth we’re done and complete. But it is a lifelong process. This learning is central to Daniel’s character arc. Heather Havrilesky writes: “You are not lost. You are here. Stop abandoning yourself. Stop repeating this myth about love and success that will land in your lap or evade you forever. Build a humble, flawed life from the rubble, and cherish that.” There is a dangerous cult of originality and authenticity that undermines young peoples’ lives today. Woolf encourages a more patient and mindful self-acceptance. In this novel, Daniel learns to cherish his humble, flawed life.

Like any parent, I want to say I have no favourites. I love all my characters deeply, as they all reflect a part of me. But truth? Hands down, it would be Parker Kapoor. Parker is blessed with an irrepressible joy for life. He grew up in an Indo-Canadian family in Sarnia, Ontario where his childhood best friend was Sunny Leone. He was his high school valedictorian, and a competitive figure skater. He also has ADHD, and is on the autism spectrum. Parker is Tigger to Daniel’s Pooh. He’s constantly saying and doing things that surprise and delight me. My husband and I were watching Canada’s Drag Race recently, and interviews with Mark Suknanan (aka Priyanka) would come on, and we’d shout out: “That’s Parker Kapoor!”

It’s always most strange and thrilling when I cease writing and start channeling. When my fingers type furiously and I literally have no idea what’s coming next. When characters – like Parker or Isabella De Luca – act contrary to my own plans or desires. In the past, when they made me feel uncomfortable, I used to censor and control them. But I’m a more humble and courageous writer now. I’ve stopped trying to bend my characters to my will. I’ve learned to trust and respect the art of writing more.

David Kingston Yeh holds his MA in cultural sociology from Queen’s University, is an alumnus of George Brown Theatre School, and attended Advanced Post Graduate Studies in Expressive Arts at the European Graduate School in Saas Fee, Switzerland. He works as a counsellor and educator in downtown Toronto, Canada. David resides up the street from a circus academy, along with his husband and a family of racoons. His short fiction has appeared in numerous magazines. He has published two novels: A Boy at the Edge of the World (2018) and Tales From the Bottom of My Sole (2020). He has been listed among "writers to watch" by CBC Books. He will complete his third novel, The B-Side of Daniel Garneau, in 2021.

Tales from the Bottom of My Sole

Welcome to the second installment in the adventures of Daniel Garneau, his eccentric family and friends. When a long-lost sister shows up as a trans man named Luke, a series of precipitous events throws the lives of boyfriends Daniel and David into turmoil. In this rollicking sequel to A Boy at the Edge of the World, the couple's exploration of sex, intimacy and love comes to a head when a shocking revelation tests their commitment and future together.