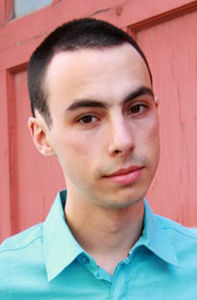 In June, Ben Ladouceur added the Dayne Ogilvie Prize for Emerging LGBTQ+ Writers to his list of honours (which already included the Earle Birney Poetry Prize and a Lambda nomination). The 12-year old prize, administered by the Writers' Trust of Canada and founded by Robin Pacific to honour her friend, the late Dayne Ogilvie, boasts an incredible roster of past nominees and winners, including Zoe Whittall, Brian Francis, and Farzana Doctor.

Ben is the author of the acclaimed poetry collection Otter (Coach House Books), and he's also a columnist right here at Open Book. If you haven't checked out his witty, intelligent, timely columns, you are missing out!

We're excited to bring you our discussion with Ben about his big win (or, as he modestly calls it "the Ben timeline"), queer writing in Canada, and his advice for emerging writers. He tells us about the difficulty of discussing LGBTQ literary experiences while being "only one of those letters", the book that is an essential read "if you have a human body", and his two primary writing goals, which are all you'll ever need to keep yourself on track as a writer.

Tell us about where you are in your writing life currently. What does winning the Dayne Ogilvie Prize mean to you at this stage?

I’m at the exact stage in a writing career where people start asking you to judge stuff. So I’ve developed this profound sense of how much work a product has to do to win a thing. I’ve also learned that sometimes the thing that wins wins by a hair. Hearing Joshua and Trish read their work at the gala, I found they were both extremely talented and deserving of accolades. I sort of felt three timelines unfurling ahead of us, each with a different winner. We wound up in the Ben timeline which is great. But I’d have been happy to reside any of those universes because all three of them were perfectly in line with my sense of justice and my taste in art.

What has your experience been writing and publishing as a LGBTQ+ person in Canada?

That’s a really hard question because I am only one of those letters! And even with that being said, I would still want to cushion my answer to your question with further disclaimers of specificity, speaking only to my experience as a Gay Author Named Ben Ladouceur. So, as one of those, I’ve developed an intense craving to read stories and poems that take me beyond the limits of my own intersections. My sense that those limits even exist is probably one of my biggest debts owed to the fact that I am an artist who can be filed under “G”.

If you could recommend one book you've loved by a queer writer, what would it be?

A seminal queer text for me was the novel Self by Yann Martel. Its queer content sneaks up on you with a sort of gentle ordinariness. Reading it in high school, I became excited that a book outside of the established LGBTQ+ canon, marketed to (and read by) the general population, could feature a protagonist who felt and acted upon queer desires. But that wasn’t a queer author so I’ll try again.

A novel I recently read and adored was Next Year For Sure by Zoey Leigh Peterson. Now I’ve provided you with an LGBT-authored book that isn’t itself all that LGBT – its central relationship is heterosexual, though that relationship’s population does increase into this big fun utopian mess. It’s a really well-constructed book that keeps your attention and looks like life.

But OK, here’s a book that’s both queer-authored and queer in content. Naked Poems by Phyllis Webb is an important book to read if you have a human body. It will take you ten minutes because Webb is really into white space.

What is your advice for emerging writers? Do you have a writing mantra or rule you find useful?

I used to say that the important thing to do is to share your work with others, but every year I meet more amazing writers who actually spent their early years writing in a vacuum. I myself was sharing work with peers and attending a writers’ circle from the get-go, but that’s not for everyone. I think the real important thing to do at the emerging stage is just to write lots. Share it or don’t, publish it or don’t, find a mentor or don’t, do whatever it takes for you to keep it up.

Do you have a project or projects you're working on right now? What are your goals as a writer?

My primary goals are to keep being challenged and to keep being honest. Which is maybe a little redundant. My partner and I are about to disappear on a two-week vacation and my writing goals for that time in particular are to keep a little daily journal. And my second collection, Mad Long Emotion, will be out in the spring. The main thing it’s about is currently flowers.

Ben Ladouceur is a writer originally from Ottawa, now based in Toronto. His work has been featured in Arc, The Malahat Review, PRISM International and The Walrus, and in the Best Canadian Poetry anthology. He was awarded the Earle Birney Poetry Prize in 2013.