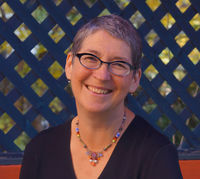 Christine Higdon's debut novel, The Very Marrow of Our Bones (ECW Press), opens in 1967, with a tough town on the Fraser River descending into panic. Two women - Bette and Alice - have disappeared without a trace, and suspicion and accusations simmer under the surface, pushing the town to the edge. No one knows what really happened... not even Doris Tenpenny, the egg seller to whom everyone confesses their secrets.

Only one person in town has found a clue: Bette's 10-year old daughter, Lulu, who finds a defiant note left by her mother for her father. Lulu keeps the secret, burying the note where no one can find it, until even she has almost forgotten.

The Very Marrow of Our Bones is a deeply compelling story of secrets, ambitions, identity, and loss, told with insight and honesty and laced with bright moments of hope and humour. Jessica Westhead called the debut novel "wise and fiercely tender... beautifully written."

We're pleased to welcome Christine to Open Book to talk about the powerful characters in her book as part of our In Character interview series. She confesses her own secret (having a favourite character!), shows the beauty in Doris's synaesthesia, and tells us who she'd love to cast to play her characters in a film adaptation.

My book revolves around three women: Lulu Parsons, Doris Tenpenny, and Bette Parsons (Lulu’s missing mother). Am I a bad mother if I claim a favourite? Doris Tenpenny is 24 when we first meet her in 1967, selling eggs at her family’s produce stand and participating in a clandestine book-club-for-two with the town’s high school librarian. As a farmer and an environmentalist, Doris is someone who spends her life quietly and firmly resisting the status quo. Raised in a fundamentalist church, Doris constantly wrestles with her belief in God and, for forty years, with something she witnessed and failed to do anything about.

All of my early readers loved Doris. Maybe that’s because I too fell in love with her while I wrote. She very quickly emerged as someone who wishes to live with great integrity and curiosity. Her passion and reverence for the natural world and every living thing in it gives her life meaning. A friend laughingly told me she has begun using the catchphrase WWDD – What would Doris do? Given Doris’ approach to life, I don’t think it’s such a bad idea.

Do you have anything in common with your main character?

Doris and I are both synaesthetes. We experience the world – names, words, music, and even events – as colours. For example, to Doris, her mother is pale yellow, like the inside of a lemon peel, while her father is burgundy. She herself is the colour red. In one of the scenes in the book Doris notices that “For the first time, Lulu’s colour and the colour of Lulu standing in the driveway were the same: a deep turquoise green, like the ocean on the other side of the world.” My synaesthesia has an impact on my writing: If a scene or a sentence feels like it has to be “green,” I have to work on it until it is green, which, of course, makes writing even more challenging sometimes! Doris and I also have a thing against coffee. (Don’t ask!) Doris might be a little more hard line than I am about some things, but you’d have to ask my family about that.

My characters most certainly had lives of their own. I went kayaking with a friend the summer I turned my final edit over to my agent. “I miss them,” I said as we glided across Toronto’s harbour. “Who?” my friend asked. “My characters,” I said. Another time, after a long, solitary period of working on the book, another friend and I were talking about writing and loneliness. “I have my characters, of course,” I said. “Strictly speaking,” she reminded me wisely, “they are not your friends.” But on some level they had become exactly that. Being so real, they made it easier for me to walk them into their book lives.

Both Doris and Bette are in close third person, present tense. Lulu is written in first person, recounting her story in past tense. Each woman seemed to demand a certain approach. Lulu’s first-person narrative allows us to watch the slow evolution of her thought processes, through her eyes alone, as she develops an understanding of herself and her place in her world. I liked writing Lulu in first person and considered it for the others too, even going so far as to rewrite a lot of Doris’ section. But first person felt too close for Doris, so I went back to something a little more distant, which suited her better. I was intrigued by how point of view could feel so right or so wrong. It became clear to me that it powerfully affected how much we could or should know about each character.

I spent a lot of time naming my characters and it was something I hugely enjoyed doing. It felt virtually as important to me that they were properly named as finding names for my sons did. And of course, as a synaesthete, every name had to be the right “colour” as well. At some point I thought of changing Doris’ name, but I felt I had to consult with her first. She stared me down from a hard, wooden chair, just daring me to do that, so ‘Doris’ she remained. I have always found graveyards and the obituary pages sources of interesting names. For some of my characters, I had to find names that didn’t have any association with anyone I’d ever met in my life. Ultimately, though, all my characters, no matter where they landed on the lovability continuum, got names I love.

I can see my characters as clearly as if they were living beings, more than just drawn on the page. I think we all do this when we read, but it was particularly exciting to write a character myself, exactly as I saw them. This will make it hard for me if the book is ever to be made into a movie! Ha!

This is the best question! Patricia Clarkson (with dark hair, of course) as Doris? Feist as Lulu? Ellen Page as young Lulu? Alison Janney as Bette? Hmmm. Wouldn’t it be fun to cast a whole film?

Christine Higdon is a writer, editor, and graphic designer. She was shortlisted for the 2011 Marina Nemat Award and for the 2016 CBC Creative Nonfiction Prize. Daughter of a Newfoundlander and a British Columbian, Christine lives in Mimico, Ontario, where she hooks rugs, worries about the bees, and longs for either ocean. This is her first novel.

The Very Marrow of Our Bones

Defiance, faith, and triumph in a heartrending novel about daughters and mothers

On a miserable November day in 1967, two women disappear from a working-class town on the Fraser River. The community is thrown into panic, with talk of drifters and murderous husbands. But no one can find a trace of Bette Parsons or Alice McFee. Even the egg seller, Doris Tenpenny, a woman to whom everyone tells their secrets, hears nothing.

Ten-year-old Lulu Parsons discovers something, though: a milk-stained note her mother, Bette, left for her father on the kitchen table. Wally, it says, I will not live in a tarpaper shack for the rest of my life . . .

Lulu tells no one, and months later she buries the note in the woods. At the age of ten, she starts running — and forgetting — lurching through her unraveled life, using the safety of solitude and detachment until, at fifty, she learns that she is not the only one who carries a secret.

Hopeful, lyrical, comedic, and intriguingly and lovingly told, The Very Marrow of Our Bones explores the isolated landscapes and thorny attachments bred by childhood loss and buried secrets.