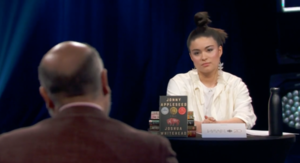 Day One of CBC Canada Reads this year saw Jessica J. Lee's Two Trees Make a Forest, defended by singer-songwriter Scott Helman, voted off. On Day Two, it was The Midnight Bargain by C.L. Polk, defended by Rosey Edeh, after Helman was forced to break a tie between Polk's book and Johnny Appleseed. And yesterday, Day Three, saw Natalie Zina Walschots' Hench topple, despite the valiant efforts of Paul Sun-Hyung Lee.

It was an exciting day not only for the authors and panellists but for Arsenal Pulp Press, the progressive, independent, Vancouver-based house that publishes both of the final two titles. This is a rare situation for indie publishing, with Canada Reads historically dominated by books from larger presses, and a significant one, as Canada Reads victories (and even inclusion) have traditionally propelled books to significant sales and even, in many cases, bestseller status. 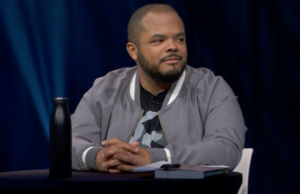 Entering the studio for the final time, the panellists were jovial after a week of interest pressure. With COVID preventing a studio audience from attending, book lovers jumped in via online tools to chat during the show, effusive about the competition, the books, and the panellists.

Jacobs was up first for a final chance to hype Johnny Appleseed, cheekily opening by saying she loved the book to her "core - pun intended" and calling for the panellists to reward its artful rendering of a painful internal (and external) journey by a memorable, Indigenous, queer, young character.

Mooking, in his turn, quoted his fellow panellists back at them, echoing the praise they'd given Honey Butter Pig Bread in earlier debates, to remind them of their affection for it.

As each panellist then praised the remaining titles, it was clear that the competition would be close. Helman summarized the tight race, saying, "I'm grappling... it's tough because they're so different."

Both books focus on home and identity, but each engages with its themes and characterization differently, with Johnny Appleseed acting as an internally-focused character study while Honey Butter Pig Bread features a large cast and explores each of their lives in turn.

As an interlude, recorded messages of support were played for Jacobs and Mooking. Literary superstar Neil Gaiman sent a message to Jacobs, who starred in the television adaptation of his blockbuster novel American Gods. He praised Jacobs, saying "Devery is a marvel; I cannot wait to see what she does next." Mooking received a message from his former bandmate, Chin Injeti (the two played in Canadian R&B group Bass is Base together). "I can't wait to hear what more you have to say about this incredible book," Injeti said in his message. "I can't think of anyone more well read and more inspired by literature than you."

But there was more for the final two panellists standing, as the voice of Jacobs' tóta (grandmother) filled the studio, reducing Jacobs to tears. The final message was from Mooking's wife Leslie and their four daughters. After the emotional messages, host Ali Hassan sympathetically joked, "this year, I can't even push Kleenexes in anyone's direction."

Soon enough it was time to vote, and the final votes fell as follows: 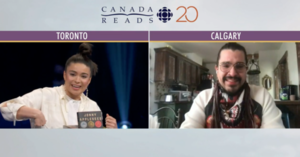 And with that, Joshua Whitehead added the Canada Reads crown to his decorated and beloved novel (which was previously nominated for both the Governor General's Literary Award and the Scotiabank Giller Prize, amongst numerous other literary awards).

Whitehead appeared via video link to speak to Jacobs as soon as the win was announced. Visibly moved, Whitehead thanked Jacobs, saying "Devery, I love you so much. We made history today." Celebrating the win as a victory for Indigiqueer people, Whitehead, who is Two-Spirit, smiled saying, "We've always been here... and now, we're in the era of Two-Spirit excellence."

If you missed the debates, you can watch recordings of all four days on YouTube, Facebook, CBC Gem, and the CBC website. Tomorrow morning, Joshua Whitehead and Devery Jacobs will speak to Tom Powers on CBC Radio's Q about