19th-Century composer Camille Saint-Saëns was a prodigy who made his concert debut at just ten years old. He's credited with influencing French musicians for decades, including the iconic Maurice Ravel. Saint-Saëns' life, and the fertile creative period in France during which he lived (known as fin de siècle), makes rich ground for Chris Eaton's Symphony No. 3 (Book*hug), a fictional account of the composer's life.

From his child prodigy days to the complex, cutthroat adult world of musicians in Paris and London in the latter days of the 19th century, Eaton's version of Saint-Saëns' life is captivating. The book is divided into four sections as a nod to Saint-Saëns' most famous work, a piece he hoped would revolutionize the music industry and, specifically, steer composers away from Beethoven's then still-dominant form and aesthetic. With parallels to contemporary tensions and political violence, the book is timely despite its 100+ year old setting, and an absorbing study of a unique musical figure rendered in rich, imaginative prose.

We're very excited to present an exclusive excerpt from Symphony No. 3, courtesy of Book*hug Press. Here we meet Camille's twin brother, the overlooked sibling behind the gifted prodigy, who perhaps understands him better than anyone else.

An Excerpt from Symphony No. 3 by Chris Eaton: 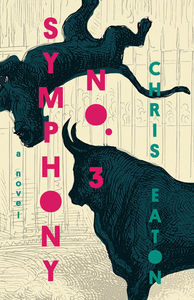 We were twins, Camille and I, born in Paris in 1835, in the third storey of the third house on the third street, surrounded by a man and a woman and a woman and a man. The men were weak and accepting of being weak. I remember my father’s hands fumbling over the body of Camille like he was a wilting chard, then retiring to the settee for a cigarette before he could even consider me, which he never did. Surely his life as a civil servant had not trained him for much exertion, a government clerk responsible largely for taking notes no one ever read and helping to prop up a corrupt establishment by co-authoring, without credit, an analysis of the effects of stronger prison sentences on ethical conduct, the longest, dullest work of fiction ever penned in this country or any other, which made two things he and Proust had in common if you also count the pulmonary abscess. I don’t suppose my father could even have been called a camel, so little he accomplished in his short time on Earth. But at least he worked. People have to work to exist, to warrant their existence, to earn the resources with which to subsist. The only exceptions, at least partially freed from the preoccupations of livelihood, are children, old people, the crippled, the sick, and the voluntarily parasitic, the category to which you might assign my aunt Charlotte and her inappropriately named husband, Esprit. My uncle had decided it was his calling to be a noble bookseller, and his largest success, finding himself with a roof over his head and regular meals, was largely accidental. For surviving the banality of my father’s existence, France awarded my mother a regular dollop of assistance, to be used together with the meagre earnings she collected as a maid to the other more affluent personages in our building, and Charlotte and Esprit rewarded themselves for their genetic association and geographic proximity by taking over the first bedroom on the left, by rights mine, and transforming it into a mausoleum for Esprit’s unsold stock, whereby Camille and I were forced into precarious cohabitation on an abbreviated mattress in the hallway closet.

Camille was easily the favourite, the gifted one, the golden child who could do no wrong. My mother and Charlotte lavished him with attention while I was largely ignored, was even left to go hungry, to basically fend for myself, so engrossed were they with my brother and his massive hands. An example: one of my earliest memories is of the park not far from our home, with its splendid fountains around which dozens of children would expel energy and would not stop. We would go and go and Camille would run his drills and because I was generally considered talentless, not worth the time of practice or aspiration or ambition, I was free to run among the park’s many statues and press my face to the busts of King Henry IV and Louis XIII and sleep in the laps of Blaise Pascal and Saint Augustine and help Barye’s Yvain battle the serpent and hide in the folds of the huge copper robes of François Rude’s Henri Bergson Losing His Faith. A park is the furthest thing from real life you can find, and sometimes you just need that. It’s not really the city, not really the wild, almost an imaginary place, a poor man’s facsimile of the idea of nature. A park full of statues is the same but more so, existing not only outside of space but outside of time. No matter when they are made, both parks and statues come from the past, look old, are designed to look old, something that has existed longer than I have and will likely continue to exist long after I am gone, while the city continues to grow around it. If a city is a living, breathing thing, a growing thing, a constantly changing thing, then the park is a city’s enduring heart. Did you know a lion’s heart never grows? Like a human’s eyes, which are fully formed in the head of a seven-year-old, a baby lion is burdened immediately with the full weight of its life, barely able to carry the load of existence, and as it grows, rather than getting any better, it actually becomes less and less able to manage the rapidly expanding size of its body. This is why lions are unable to run long distances, as opposed to hyenas, who have hearts that comprise more than twice the percentage of their body weight, and the real explanation for Richard the Lionheart’s name, as he took his holy war to Saladin’s Arabs at Acre, barely able to stand from scurvy, firing crossbow bolts at the walls from a stretcher. The statues of Lionheart never show that.

I apologize. When you have all the time in the world, you find even more time for distractions. On the day I’m remembering, the air was mild and flooded with sunshine and shadow. The sky was as clear as if the angels had washed it in the morning. A group of workers and students were chanting near the big building at the north end and appeared to be having a great go of it. I watched them for some time, as they pushed closer to something I couldn’t see, then retreated again. I found it soothing. My aunt Charlotte took out a basket, from which she removed three small sponge cakes (possibly dipped in chocolate, this detail is fuzzy), handed one to my brother, one to my mother, and kept one for herself, and I crept up from behind, intent on snatching one before anyone could notice. Suddenly there was a gunshot at the pond, followed immediately by several others, and a shudder ran through me and I stopped, intent upon this extraordinary thing that was happening around me. Men came rushing past us like startled gazelles, erupting from the hedge and brush in huddles of twos and threes, bayonets out like antlers. The first of them, removed at several stages from the actual threat, danced around the sculptures and brooks, coursed around our blanket rather than over it, safe in the knowledge that they were outrunning the others, calculated and dull. But later the runners were whipped with blood and spittle, frothing and lowing, with a terror that was pure and beautiful, without time for thought. From whence did it come? What did it mean? How could I seize and apprehend it? Like any child, I turned to my mother to share in the experience, but she was already moving, reaching instinctively for Camille, only slightly slower than my aunt, who tossed my brother over her shoulder, lively and swift like a bird, and I was left with nothing but the retreating face of Camille, a face in miniature, sullen and discontented and sad.

My mother never once spoke to me, would not even look at me directly. I was an orphan with two mothers and a father, the brother of an only child. Not that I blame or resent them. I have no regrets. Had I not been forcibly born into this family of neglect, what might my life have borne? A family of poverty? A family of abuse? The seventh unwanted son of a seventh unwanted son? Perished well before my time? In this life, no one yelled at me. No one molested me. No one set my cheek to the stove. No matter what anyone tells you, life can always be worse. So I made the most of it, and might even have been described as happy, if anyone had ever bothered to take notice of me at all, or if happiness were a real thing. The fact is, it was clear to everyone around me, including myself, that I was unimportant, would never change the world. I was not to be heard, nor to be seen. Even before we were born, my mother had dreamed that her sons would be, in sequence, a musician, a sculptor, and a painter, no doubt spurred by dreams of financial success in the arts as espoused by her sister and brother-in-law. Camille, as the first to draw breath, had his career set; I, in turn, well, let’s just say there wasn’t enough to invest in the proper training of two offspring at once. Thus it became Camille’s job to channel the music, to be a pure vessel for its delivery, to create beauty, while my purpose, conversely, was merely to observe, to walk the grand salons of Camille’s life like a careless tourist, without schedule or plan, not even looking at each painting on the walls, necessarily, but aware of each one nonetheless. I would make no impression on the world and thus was free to live the life less purposed, less underscored, less italicized, with the hope that I might, purely by perceptiveness and proximity to greatness, learn more to see as beautiful what is necessary in all things.

This excerpt is taken from Symphony No. 3, copyright © 2019 written by Chris Eaton. Reproduced with permission from Book*hug Press, Toronto.

Chris Eaton is the author of three previous novels, including Chris Eaton, a Biography (Book*hug, 2013), selected as one of the Books of the Year by Quill and Quire and the Toronto Star. He spent many years making music in the band Rock Plaza Central. He currently lives in Sackville, New Brunswick, with his partner and two children.

Symphony No. 3 follows the life of renowned French composer Camille Saint-Saëns as he ascends from child prodigy to worldwide fame. As his acclaim grows in Paris, the musical world around him clamours with competitors, dilettantes, turncoats and revenge seekers. At the height of his success, Camille leaves everything behind to embark on a Dantean quest for his dead lover, Henri. At the end of this adventure, still haunted by the holes in his past, he takes up an invitation to journey by ocean-liner to the New World.

Finely crafted in its own unique rhythmic language, Symphony No. 3 is cast in four sections to mirror Saint-Saëns’s famous work, popularly known as the Organ Symphony. Written and performed in London, England in the infamous late 1880s, this was the composition he hoped would finally destroy Beethoven’s stranglehold on the industry and reinvent the form.

Though set in the decades surrounding the fin de siècle, Symphony No. 3 speaks directly to our present moment and the rise of political violence.