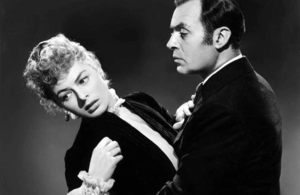 Domestic noir (also known as domestic suspense or domestic thriller), is a genre that has exploded in popularity over the past decade, with books like Gillian Flynn's Gone Girl, A.S.A. Harrison's The Silent Wife, and Shari Lapena's The Couple Next Door dominating the bestseller lists.

The genre has long-standing roots, mostly coming out of film, where 'marriage thrillers' were a popular genre in the mid-20th Century. These films - including the 1944 genre classic Gaslight, from which the psychological term 'gaslighting' (in which a romantic partner subtly and purposefully attempts to manipulate their partner into doubting their own perception of reality and even their sanity) was taken - feature the important hallmarks of the genre: the discovery by one partner (usually a wife) of their spouse's true, dark nature; doubt about whether the protagonist's suspicions are paranoia or reality; and the eventual reveal of the manipulative spouse's depth of deception. The 1944 film was based on a 1938 play by British playwright Patrick Hamilton.

In domestic noir, often the secretive spouse has a dark past that the protagonist is initially unaware of. Some argue that the genre's roots go back as far as fairy tales like Perrault's "Bluebeard" and similar tales of young wives narrowly escaping violent husbands who initially seem wonderful.

It's a fascinating exploration of the fears that surround a basic emotional question when it comes to romance and relationships: how well can we truly know another person?

We're excited to present the book trailer for Erin Ruddy's Tell Me My Name (Dundurn Press), a powerful new addition to the domestic noir genre, which is coming out in June 2020. Set at an isolated cottage, it puts a fresh spin on the genre when the central couple are kidnapped early in the narrative, held hostage by an apparently unstable man insisting he is the true soulmate of the protagonist - an event that slowly reveals the deceptions on which the couple's long relationship was built.

To learn more about Tell Me My Name and Erin Ruddy, visit the Dundurn Press website.