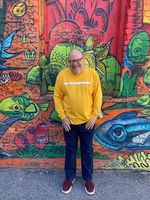 As the publisher of Toronto's beloved knife | fork | book, Kirby is acclaimed for both for their own poetry, which often celebrates queer love and lust against a backdrop of the stridently heteronormative world, and their tireless work for other writers running events, publishing chapbooks, hosting workshops, and more.

Their newest book, Poetry is Queer (Palimpsest Press) is a vibrant genre-blurring project that is combines fiction, poetry, and memoir in a fevered, imaginative romp through the poetic past that swings between joy, dark wit, and arresting insight.

Through the lens of poetry, we met lovers, partners, and friends as well as untouchable, famous fixations and cherished icons, all rendered in Kirby's crisp prose.

We're proud to present an exclusive excerpt here today from Poetry is Queer, in which we get a glimpse of early, formative poems that affected Kirby, the complexities of adolescent crushes for queer youth, and the fatigue that comes with the never-ending battle for safety for the queer community.

Excerpt from Poetry is Queer by Kirby:

Dennis Cooper is a boy you want to have a fort with. The kind of boy I dreamed of walking across the cornfield to meet and see what he might be up to. The kind you sneak into R-rated horror movies with. Steal smokes, chips, a candy bar.

I knew he was trouble, and that simply added fuel to the fire. He’s the boy in every all-male teenage-angst film, bloody knife in hand.

He knew I wanted him and would do anything for him.

This is exactly how Cooper’s writing affected me. Like we belonged to some secret club, and each day we had to do as he would say, prove we were good enough to be near him. His shit-eating grin.

And even then it was entirely up to him.

His work tills a kind of familiar terrain, one that draws you in unexpectedly, makes you feel involved. Even if only a spectator.

Truth be told, he was my first. The first to openly name my desires in poetry, writing about pop stars and boycrushes, David Cassidy to John F. Kennedy Jr., hustlers, neighbourhood boys. An early chapbook named Tiger Beat, after the teen pin-up magazine, had a huge close-up of a smiling Leif Garrett on the cover. It was from a small press Cooper started in the mid-’70s, Little Caesar, which also published Joe Brainard, Eileen Miles, Tom Clark, Rimbaud.

His debut collection, Idols, came out from another early gay imprint of the ’70s, The Sea Horse Press, published by Felice Picano. As a teen I took the risk of mail-ordering it to my family’s house, and prayed each day I would get the mail before my mom.

Turns out, we both had a thing for David Cassidy.

I mean, Holy Fuck How Could You Not? Those dimples. The radiant shine of his shag haircut. Those sweater vests. Wide-collared shirts. Belts. Flares in tight double-knit emphasizing his religion. He was a sex-bomb.

In “David Cassidy Then”:

David Cassidy picks me on The Dating Game.
I walk around the partition
and there he is. A quick kiss,
then Jim Lange gives us the good news.

“David, we’ll be flying you and your date
to... Rio de Janiero!”

When Dennis signed my copy of Frisk, he drew us both as ghosts, one named Kirby, the other Dennis, playing with each other.

His second collection, The Tenderness of Wolves, may be a better-written book, but it’s my copy of Idols that is worn. It closes with a poem that I carry with me to this day, “Jeff, After A Long Time,” with this ending:

And just a poem
to show when I grow
tender, you remain
that friend that
I am reaching for.

Needless to say, I wasn’t allowed to be boycrazy in my teens.

O, I was. But to demonstrate even a thimbleful of interest... game over.

So, I did what most clever gays do: scrapped adolescence. Leapt from childhood to adult.

Many do for the remainder of their lives. Some marry the opposite, have kids. Only to come out later if at all.

Then chastise themselves, either for not com- ing out sooner, or for ruining their once-happy family.

“It would kill them” really meant I would lose everything.

This was the definition of being gay for most men my age.

“Yeah, but things are different now.”

I cannot hear the name Matthew Sheppard. And how many trans?

Being beaten to death, murdered. Hated.

It may be less, but no. Still the same.

I dream Johnny Mathis sings me one love song before we die.

If you don’t know my references, look them up.

I’m tired of making it easy.

Excerpt from Poetry is Queer by Kirby, a novel published by Palimpsest Press. Copyright 2021, Jeff Kirby. Reprinted with permission.

Kirby’s work includes What Do You Want To Be Called? (Anstruther Press, 2020), This Is Where I Get Off (Permanent Sleep Press, 2019) and She’s Having a Doris Day (Knife Fork Book, 2017). They are the publisher / book fairy at knife | fork | book [Toronto]. jeffkirby.ca

Poetry is Queer is a kaleidoscope of sexual outlaws, gay icons, Sapphic poets, and great lovers—real and imagined—conjured like gateway drugs to a queer world. Claiming the word “queer” for those who self-proclaim the authority of their own bodies in defiance of church and state, Kirby pays tribute to gay touchstones while embodying both their work and joy. From gazing upon street boys with constant companion C.P. Cavafy, to end of day observances with Frank O’Hara, to mowing Walt Whitman’s grass, Poetry Is Queer is a hybrid-genre memoir like no other.