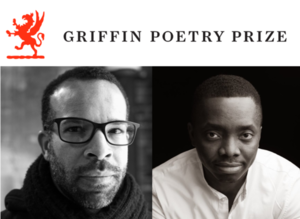 Both poets turned out powerhouse collections, with Kearney's Sho (Wave Books) and Oloruntoba's The Junta of Happenstance (Anstruther Books/Palimpsest Press) creating significant excitement upon their publications. The LA Review of Books praised Kearney when discussing Sho, saying "there is no one who is doing what he is doing" and highlighting Kearney's ability to combine a playfulness in language with impactful and urgent political commentary about race and the white gaze. CBC Books was enthusiastic about Oloruntoba's debut, calling it "personal, primordial, and pulsing with syncopated language" and noting the poet's ability to engage with "social justice...[and] the contemporary moment with empathy and intelligence".

The Griffin Prizes are amongst the most prestigious poetry prizes in the world and each winner is awarded $65,000 as part of their prize.

Kearney and Olorutoba spoke with Open Book yesterday, along with their fellow Griffin nominees Natalka Bilotserkivets and translator team Ali Kinsella and Dzvinia Orlowsky (Eccentric Days of Hope and Sorrow, Lost Horse Press); Catalan poet Gemma Gorga and translator Sharon Dolin (Late to the House of Words, Saturnalia Books); Ed Roberson (Asked What Has Changed, Wesleyan University Press), David Bradford (Dream of No One But Myself, Brick Books), and Liz Howard (Letters in a Bruised Cosmos,McClelland & Stewart). Howard was also the winner of last year's Griffin Prize for her debut collection, making it two years in a row that the Canadian prize has gone to a debut.

In our conversation, Oloruntoba discussed the "only four" poems that he writes and praised Aidan Chafe’s poem "Safety Rules", while Kearney discussed his process of "'tuning' and 'distressing'" poems and shared his love for M. Nourbese Philip’s Zong!. Both poets weighted in on writing as a parent, with Oloruntoba preferring to write before his family wakes and Kearney sharing he often writes late into the evening while his family sleeps.

The remaining finalists will each be awarded $10,000, and the Griffin Trust's film announcing the winners is available online for anyone who missed the live stream.