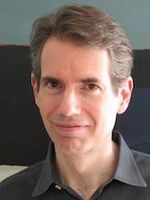 December 21, 2018 will mark the 50th anniversary of the Apollo 8 mission, the first manned mission to fully orbit the moon and return safely. During the mission, on Christmas Eve, astronaut William Anders took a photograph that would become one of the most iconic images of the 20th century: it was the first time an 'earthrise' was captured, with the earth rising out of the darkness of space much like the sun right over the horizon. The image was reproduced everywhere and captured the entire world's imagination.

James Gladstone's Earthrise: Apollo 8 and the Photo That Changed the World (Owlkids, illustrated by Christy Lundy) examines the significance of that photo and tells the story behind it in a kid-friendly picture book. Drawing on dialogue from NASA transcripts, Gladstone takes readers into the iconic moment and explains how it was Earthrise, the photo, that first inspired the now-annual Earth Day.

We're excited to welcome James to Open Book today to tell us about his experiences writing and publishing as part of our Going Pros and Cons interview series.

He talks about popping some bubbly with his parents to celebrate an early publishing milestone, the long waits that come with writing pictures books, and his valuable advice for writers trying to get published.

I write picture book manuscripts. That’s my focus. Since illustrations have to be created for these books, there is a sense of delayed victory: it’s often two to three years from when a contract is signed to when the pictures are done, and the book is printed.

There is that first rush of excitement when a publisher accepts a manuscript for publication. And in fact, when I received my first contract from one publisher, I was fortunate in that a second contract offer appeared within a few weeks for a different manuscript with a different publisher. It felt great, but I think I celebrated simply by feeling happy about the turn of events and writing a lot more manuscripts.

Finally, when my first book arrived, printed, in a box, I drank a bottle of sparkling wine with my parents.

A big writing or publishing disappointment I remember and how I coped:

Over the years, I’ve received many rejection letters—as we do. But for the 12-month period preceding my first book contract for the picture book, When Planet Earth Was New, I received a slew of rejections for that very same manuscript.

How did I cope? I revised the manuscript, found more publishers to send it to, and sent it to them.

It turns out I didn’t need to put in that extra effort. Owlkids Books had the manuscript in their slush pile from my first set of publisher mail-outs. They found it eventually and dropped me a line asking to publish the book.

Still, I would likely do the same thing today—a flurry of additional manuscript mail-outs. It feels better to do something to sell a manuscript rather than nothing.

I’ve worked for years as an editor, and I’ve always been involved in the publishing process from manuscript development (not picture books) through to the end product. I’ve never done a lot of waiting around with that work.

However, as picture book writer, my role is much more removed from the entire process. I write the manuscripts, of course. The editor and I work on the piece. Then it’s handed over to the illustrator, and I wait.

From the start, I knew that pictures would have to be made, but it never occurred to me how long it would take to make great illustrations.

But the waiting is worth it. I feel elated when I see rough art. When I see final art, it’s possible that I glow for an entire week. It’s why I started writing picture books in the first place. I love the challenge of conveying a story, an idea, in a few hundred words. But mostly I love the pictures.

I can only speak to writing and publishing children’s picture books.

Unless you happen to have a phenomenal talent that explodes out of you on your first attempt, I would expect to write several manuscripts before hitting upon one that a publisher wants to publish.

Of course, read a lot of picture books—see what’s on the market, how the books are written, how the pictures work to tell the story and add to it—then try to forget everything you have read. There’s no point in trying to write like other people. It doesn’t tend to work out.

I suppose this is about finding one’s ‘voice.’ I’m not entirely sure what an author’s voice is—other people could speak more articulately about this. But I think one component of voice may be in the idea you choose to write about. I believe this already says something about you: what’s important to you, what interests you—surely what you choose to write is one part of your voice?

Working with ideas that genuinely interest, excite, and intrigue you give you the best shot of developing a personal style of storytelling.

Of course, you have to be practical, too. While you’re considering the story ideas that excite you, you need to try to pick out the ones that can fit into a market space that hasn’t been done (or overdone). Your manuscript also has to suit a publisher’s list—which may change over time. I never said this was simple. And I’ve failed to apply my own advice on many occasions.

The two most important things for me are quiet and time. Sometimes I don’t find these things in my official home writing space.

I live in Toronto, which has become the city of construction. Sometimes it’s quiet at home; sometimes it’s not. I use ear plugs when I have to. I go to a quiet library, if I can find one. I work when the city quiets down: evenings, weekends.

As for time, I can find it if I’m flexible. I’m often more productive when I feel energized to write rather than scheduling writing times.

Time tends also to involve re-defining what my writing space is. For example, sometimes my writing space is my bed during the night hours. I listen to music, my mind slows, then gently, often unintentionally, my thoughts turn to a manuscript in progress or a new idea. I piece lines or ideas together in a half-asleep state. This is followed by getting up quickly to make notes. Fortunately, this is not a nightly exercise. It’s inconvenient for sleeping, though the results are often rewarding.

Earthrise: Apollo 8 and the Photo That Changed the World

1968 was a year of unrest: many nations were at war. People marched for peace, fairness, and freedom. At the same time, the Apollo 8 crew was about to go farther into space than anyone had gone before—to the moon.
As they surveyed the moon’s surface, astronauts aboard Apollo 8 looked up just when Earth was rising out of the darkness of space. They saw the whole planet—no countries, no borders. The photograph they took, Earthrise, had a profound effect when published widely back on Earth, galvanizing the environmental movement, changing the way people saw our single, fragile home planet, and sparking hope during a year of unrest.
This important and timely picture book is publishing to coincide with the 50th anniversary of the Apollo 8 mission, telling the story behind the photograph, both inside the spaceship and back on Earth. Text includes dialogue pulled from NASA’s Apollo 8 transcript, drawing readers into the iconic moment Earth was photographed from space. An author’s note at the end explains more about the photograph, the Apollo 8 mission, and how Earthrise went on to inspire Earth Day.