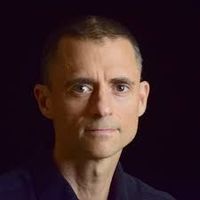 A Suitable Companion for the End of Your Life (Coach House Books),  is not what you might expect. For one thing, he wrote it before COVID-19, finishing just as the real world began to eerily mirror his fictional one. And for another, it's a strangely enjoyable, even darkly funny adventure, in which the plague of McGill's invention drives people to have themselves "flatpacked", IKEA-style, for a chance at later re-inflation and survival.

In A Suitable Companion for the End of Your Life, the flatpacked Ülle is delivered to Regan, a depressed teenage track star whose future has been derailed by an injury. Intending to end her life through the unexpected and deadly off-gassing the "flatpacks" emit, she inflates Ülle. But as Ülle begins to regain memories of her life, and as Regan begins to change her mind, their story shifts into a thoughtful, riveting mystery in which the women band together against shadowy elements from Ülle's past, while exploring themes of loneliness, connection, class, and gender.

It's a wonderfully weird triumph of a third novel for McGill, who has mentored countless emerging writers in his role as the director of the University of Toronto's M.A. program in creative writing.

In our conversation today, he tells us why he has sympathy for his most villainous character, about some rather strange Google searches he had to do while writing, and how the way he thought about loneliness changed while he revised the novel. 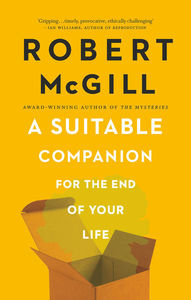 Well, it began with ordering a mattress. I’d wanted to write about the ambivalence we can all feel with respect to being alone and being with other people. Then the mattress arrived, flattened and rolled up, with a note that said it would take 48 hours to decompress. For the next couple of days, I went around the house picturing the mattress as this animate being laid out in the bedroom, slowly regaining its form. I started imagining a scenario in which “flatpacking” people was a thing—and suddenly, the story I’d wanted to write took on a whole new shape.

For a long time, I lived in Toronto, but I never wrote about the city while I lived there. Then, a few years ago, I moved out of town. The dislocation kickstarted me into thinking about Toronto in different ways: as a striking blend of utopian civic possibilities and everyday dystopian reality.

Once I knew that A Suitable Companion for the End of Your Life would have a speculative element, Toronto seemed like the perfect setting. Some of my favourite novels with unusual premises take place there: Nalo Hopkinson’s Brown Girl in the Ring, André Alexis’s Fifteen Dogs. I also love seeing versions of the city in TV shows like Orphan Black and The Expanse. I wanted to do something similar: take familiar neighbourhoods and cast them in an estranging light.

The novel starts with a young woman named Regan opening a box and finding a person named Ülle inside. Regan has had Ülle sent to her partly out of loneliness. Originally, I imagined Regan facing a series of ensuing ordeals that would ultimately leave her alone again but with a changed attitude toward solitude.

As I wrote the novel, the relationship that developed between Regan and Ülle took on a different cast than I’d expected, so that the planned ending no longer felt right. I don’t want to spoil the plot, but the story’s no longer just about being alone; it also explores how we deal with all the complications of caregiving.

I don’t have a favourite, but there’s a character named Mormor whom I especially grew to appreciate as I wrote the novel. She’s the head of a crime family, a former shot putter, and a grandmother. That’s basically all I knew about her when I started work on the book. As I went on, I kept discovering things about her: her odd medical condition and how she deals with it; her history of self-sacrifice. She makes choices for herself that I’d never make, and from one perspective she looks like a villain, but I ended up with great sympathy for her.

That’s always how writing a character goes for me, though. If I don’t feel sympathy for them by the end, I know I haven’t done them justice, so I have to go back and spend more time with them until I get them right.

My last novel was set during the Vietnam War, and the research took me years. With A Suitable Companion for the End of Your Life, because it’s set in a speculative version of a city I know intimately, and because it’s mostly focused on interpersonal relationships, I thought I was giving myself a break from research.

But with a novel, no matter what story you’re writing, you end up needing to learn all sorts of things. So at one point, I found myself looking up the previous names for Ellis Island in New York. At another, I found myself googling “how it feels to be shot with a Taser.” To keep fiction healthy, no matter how invented the situation, you need to keep dosing it with the real.

The strangest thing was that the novel has a pandemic in it, and I finished writing it just before the coronavirus hit. The pandemic in the book involves a parasite, not a virus, but once we entered the COVID-19 era, I discovered that the novel suddenly had some startling real-life echoes, from everyone wearing masks to controversial treatments.

Weirdly, though, the part of the novel that ended up feeling most resonant was Regan’s situation at the start, stuck alone in her house. Her situation isn’t actually due to the pandemic, but her feelings of loneliness hit me differently as I revised the novel while living under lockdown conditions. Her situation made me think about how COVID didn’t introduce a whole new way of being for humanity so much as exaggerate conditions that many people have long experienced: things like isolation, precarity, and a need for care.

Robert McGill’s writing has appeared in magazines including The Atlantic, The Dublin Review, Hazlitt, and The Walrus. He teaches at the University of Toronto. His previous books include two novels, The Mysteries and Once We Had a Country, and two nonfiction books, The Treacherous Imagination and War Is Here. Visit him at robert-mcgill.com.

A Suitable Companion for the End of Your Life

A bold and absurd new take on the dystopian plague novel, where people are treated like IKEA furniture

Distraught and hopeless, an eighteen-year-old distance runner, Regan, decides to end her life. And she’ll do it through an unusual new method available only on the dark web. Enter Ülle, a woman with amnesia, who will, inadvertently, make Regan’s wish come true.

Soon Ülle begins to remember her past and the outrageous steps her government took to combat a deadly pandemic of parasitic infections, which have brought her to this new country and to Regan’s house. Meanwhile, Regan might be changing her mind, and she finds herself more and more concerned about keeping both Ülle and herself alive. But the shadowy organization that brought them together wants to keep them both quiet – permanently.

A Suitable Companion for the End of Your Life is a darkly comic dystopian tale that probes our anxieties around boundaries, whether territorial or bodily, and our fraught desire not to die alone.