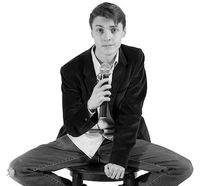 Comedian Michael McCreary's Funny, You Don’t Look Autistic: A Comedian’s Guide to Life on the Spectrum (Annick Press) takes on stereotypes about autism with wit and heart. Explaining how Autism Spectrum Disorder (ASD) can look incredibly different from one person to another, McCreary upends assumptions and popularized misinformation.

Geared towards young adult readers, the book shares McCreary's journey from his diagnoses at age five through tough school years to his successful stand-up career. Perfect for readers both on and off the spectrum, it's a deeply empathetic and entertaining literary debut.

We're excited to present an excerpt from Funny, You Don't Look Autistic: A Comedian's Guide to Life on the Spectrum here today, exclusively for Open Book readers, appearing courtesy of Annick Press. The excerpt consists of the book's introduction, making it a perfect taste of what you'll get if you pick up McCreary's book to read more.

Excerpt from Funny, You Don't Look Autistic: A Comedian's Guide to Life on the Spectrum by Michael McCreary: 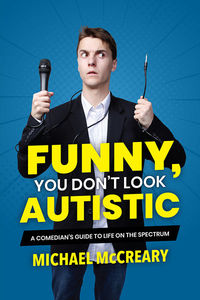 Hello! I’m Michael and I do stand-up comedy about being on the autism spectrum. Those two things don’t sound like they should go together, but comedy’s all about breaking the ice on topics that people are too scared to talk about.

I was diagnosed with autism at the age of five. I wasn’t diagnosed as a comedian until much later, though I always loved to perform and make people laugh. When I started doing stand-up in my teens, I realized that I could use comedy to help demystify autism and break down stereotypes. Being autistic has its challenges, sure, but it’s not all PSAs of empty swings blowing in the wind set to Sarah McLachlan music. There’s plenty to laugh about, too.

People responded to what I was doing, and soon I went from performing in schools and church basements to bigger venues: universities, comedy clubs, conference centers, and even Toronto’s famous Massey Hall. I toured Canada from coast to coast and was interviewed on national radio and TV. It was clear that the world had an appetite for autism-based humor.

Maybe you know someone with autism. In fact, you probably do, even if you don’t know it. It might be a friend, someone in your family, or the kid who sits behind you in class who can’t stop jiggling his leg (probably him). Maybe you’re curious about what autism is, or you’re seeking a deeper understanding so you can better support the people in your life.

Or maybe you’re somewhere on the autism spectrum yourself. If so, congratulations! You are part of the 1.5 percent. Take solace in knowing you’re not alone.

Either way, if you’re looking for a comprehensive and detailed examination of autism and its myriad workings in the brain, this book you’re holding is definitely not it. Put it down and pick up something that wasn’t written by a comedian.

This is also not a book about some universal experience of “being autistic.” Everyone with autism spectrum disorder (ASD) is different, and I believe I can speak for all of us when I say that I shouldn’t speak at all.

What you will find here is my own story of navigating life, school, friendship, love, and amateur theater as a person who happens to have ASD. Along the way, I hope to provide some insight based on my own experiences, and conversations with other people, into what being autistic is about. And if you ever figure me out, I want an explanation.

Whether you’re on the spectrum or not, I hope that you’ll be able to relate to my struggles and triumphs,* and that we can laugh together at all the quirks and awkward moments that come with being human.

I met a woman recently and happened to mention that I am autistic. She responded, “That’s ridiculous, you’re doing great!”

Now is probably a good time to talk about how people with ASD like to refer to themselves. Some autistic people prefer person-first language: “a person with autism.” Others prefer to put the identity first: “autistic person.” I believe that people on both sides want to emphasize the value and worth of the individual. No matter what the person’s point of view, it’s important to respect their choice of terms.

Personally, it doesn’t matter to me if someone says I’m autistic or that I have autism. They both mean the same thing in my eyes, and I use both terms. My choice at any point depends on what makes the sentence flow better and provides the clearest meaning. Over the course of this book, I’ll be using these terms interchangeably.

So, remember, if you’ve met one person with autism (or autistic person), I hope it’s Dan Aykroyd. He’s a Ghostbuster!

*A note to my non-autistic readers: As you embark on this journey through my ASD mind, there’s a high likelihood that you’ll find at least some of my experiences relatable. Should this occur to you, take a deep breath and put down the Buzzfeed quiz—it doesn’t mean you’re autistic. People with ASD aren’t aliens, and we have many of the same thoughts and feelings as anyone else; the difference is in the intensity of those feelings and the degree to which they affect our functioning. Remember that only a professional can properly diagnose someone with ASD.

This excerpt is taken from Funny, You Don’t Look Autistic: A Comedian’s Guide to Life on the Spectrum, copyright © 2019 by Michael McCreary. Reproduced with permission from Annick Press, Toronto.

Michael McCreary has performed at stand-up shows, keynote addresses, and panel presentations in every province in Canada and across the United States. Michael has honed his comedy skills at Toronto’s Second City Training Centre. He uses stand-up to dispel many of the long-held misconceptions about being on the autism spectrum. He is overjoyed to explore these ideas in depth in his first book, drawing on his personal experiences as well as his own observations of autism in pop culture.

Funny, You Don’t Look Autistic: A Comedian’s Guide to Life on the Spectrum

Slaying autism stereotypes with stand-up, one joke at a time.

Like many others on the autism spectrum, 20-something stand-up comic Michael McCreary has been told by more than a few well-meaning folks that he doesn’t “look” autistic. But, as he’s quick to point out in this memoir, autism “looks” different for just about everyone with Autism Spectrum Disorder (ASD).

Diagnosed with ASD at age five, McCreary got hit with the performance bug not much later. During a difficult time in junior high, he started journaling, eventually turning his pain into something empowering—and funny. He scored his first stand-up gig at age 14, and hasn’t looked back.

This unique and hilarious #OwnVoices memoir breaks down what it’s like to live with autism for readers on and off the spectrum. Candid scenes from McCreary’s life are broken up with funny visuals and factual asides. Funny, You Don’t Look Autistic is an invaluable and compelling read for young readers with ASD looking for voices to relate to, as well as for readers hoping to broaden their understanding of ASD.