If asked to find a word to describe our current point in history, few would immediately land on "hopeful". But for Maude Barlow, former senior water advisor to the UN General Assembly, lifelong activist, and bestselling author, even after decades of fighting tirelessly for equity on causes ranging from feminism to her clean water work, hope is the root of all change and an essential flame to be protected and stoked.

Barlow's tough-minded optimism is the driving force of her powerful new memoir, Still Hopeful: Lessons from a Lifetime of Activism (ECW Press). Written not only to record her experiences but to inspire others, Still Hopeful is the antidote to the understandable pessimism of our times. From sharing the load as activists to finding your passion, she offers wisdom, guidance, and, indeed, hope to readers longing for a better tomorrow.

We're proud to present an excerpt from Barlow's book here today, courtesy of ECW Press as part of our February focus on excerpts that inspire. This opening section of Still Hopeful is a great glimpse into both the life and the mindset of one of the most effective progressive activists of our time.

And don't miss your chance to win a copy of Still Hopeful for yourself, along with two other inspiring memoirs, by entering our Valentine's Radical Love contest with ECW Press. The deadline to enter is February 20, 2022.

Excerpt from Still Hopeful: Lessons from a Lifetime of Activism by Maude Barlow 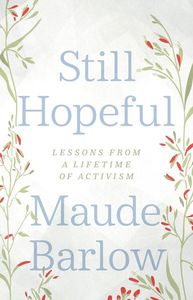 I have been contemplating the notion of hope for a long time. I have been a social justice activist for over 40 years and have found hope to be a prerequisite for creating change and inspiring others. Hope has been built into the DNA of my life.

I come from a family dedicated to social justice. My father was a pioneer in the field of criminal justice and led the fight against capital and corporal punishment in Canada. I have an early memory of watching him debate Canada’s official hangman onblack-and-white TV. Canada’s hangmen were always known as Mr. Ellis, and they wore a hood to disguise their features.

With our morning oatmeal, my two sisters and I were taught that we owed something for the privilege of living in a place of such opportunity. We were taught that hope is a moral imperative, and it has been my lifelong mantra.

Recently, however, it has been getting harder to remain hopeful against the relentless tide of negative information that threatens to drown us in a sea of despair. It is hard to pass a day that we don’t read of more fires, hurricanes and drought, each year hotter than the one before; the mass melting of the planet’s ice cover; the sixth great extinction; the devastation of insects, bees and birds; the destruction of rainforests and watersheds. We are entering a time of great economic uncertainty and devastating hardship for many millions of our fellow humans. Even before COVID exacted its terrible toll, the UN announced that three-quarters of the world’s workers are in precarious jobs, without pensions, security or even a livable wage. Now, with whole industries collapsing and countries facing alarming drops in their GDPs, fear is setting in for those who face a compromised future.

In my social justice work, it is getting harder to stay positive in front of my colleagues, many of whom are such experts in the details of the crises we face that it is hard for them to offer hope themselves.

The idea for this book came to me on a lovely June evening in 2019 in a packed Ottawa church. I was on a panel about the Green New Deal with David Suzuki, Avi Lewis and a few others. Some spoke in language that I can only describe as apocalyptic, the message hammered home that there are only ten years left of a habitable planet. I noted that there were a lot of young people in the audience, including my 16-year-old granddaughter Eleanor.

In my presentation, I spoke of hope and about building movements and offered examples of winning campaigns.

This elicited some debate from the other panelists and a caution from Suzuki that we do not sugarcoat the facts. I have known, admired and worked with David for years and have watched him become increasingly and understandably frustrated with the glacial pace of change in the face of a worsening environmental crisis. Long a beacon of hope himself, he was angry this spring evening — as were we all — that the federal Liberal government had recently bought a pipeline and the NDP/Green coalition government of his home province of British Columbia was going ahead with the infamous Site C dam and an expanded fracking industry. Hope was in short supply in that Ottawa church.

After the event, a high school student came up to me in tears and thanked me for my hopeful words, saying she and her friends had sat devastated and paralyzed throughout the panel discussion until I spoke. What could they do in the face of such overwhelming evidence of ecological collapse, she asked. I had many ideas. On my walk home, the air fragrant with apple blossoms and lilac trees and the evening too lovely to feel anything but joy, I made a vow to help that young woman, and my grandkids, to find the path ahead.

How could I share what I have learned — including all the mistakes — in over 40 years of fighting for social and environmental justice? Do I and others of my generation have something to offer individuals and organizations working in equality, justice, democracy and environmental protection? Could we inspire young people to see that the life of an activist is a good life, one that gets you up in the morning thinking about more than yourself? Could we help arm them for the hard work and many disappointments ahead? Could we help them find the joy in the struggle to make a better world? Could we help them not to be overwhelmed with the enormity of the task ahead?

Standing under a newly leafed tree silvered by a new moon, I remembered the words of a PEI farmer friend who always said that when he is overwhelmed, he stops thinking of the enormity of the challenges he is facing and instead asks himself one simple question: What is the next appropriate step to take? Then he takes it.

Well, for me, the next appropriate step to take was to write this book. I offer it to you, with hope.

Maude Barlow is the bestselling author of 20 books. She sits on the board of Food & Water Watch, the Global Alliance for the Rights of Nature, and is a councillor with the World Future Council. She served as senior water advisor to the UN General Assembly and was a leader in the campaign to have water recognized as a human right. She is the recipient of fourteen honorary doctorates, the Right Livelihood Award and is the current chancellor of Brescia University. She lives in Ottawa, Ontario.

Still Hopeful: Lessons from a Lifetime of Activism

“It’s time we listened to the Maude Barlows of the world.” — CNN

In this timely book, Barlow counters the prevailing atmosphere of pessimism that surrounds us and offers lessons of hope that she has learned from a lifetime of activism. She has been a linchpin in three major movements in her life: second-wave feminism, the battle against free trade and globalization, and the global fight for water justice. From each of these she draws her lessons of hope, emphasizing that effective activism is not really about the goal, rather it is about building a movement and finding like-minded people to carry the load with you. Barlow knows firsthand how hard fighting for change can be. But she also knows that change does happen and that hope is the essential ingredient.