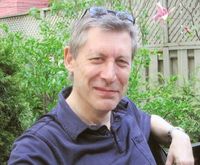 Karl Jirgens' collection of linked stories, The Razor's Edge (Porcupine's Quill) asks questions about the past and future, how loss and violence live in the land and our genes, and how the mysteries of these long legacies haunt us for better or worse.

These characters search for love and beauty in fleeting moments against backdrops that range from the quotidian to the truly bleak, as Jirgens' dreamlike prose casts a spell. The fantastical lurks at the corners of the stories, with mysterious occurrences, strange memories, and the constant question of whether the past can quite stay where it is.

In this excerpt, part of our February focus on excerpts and presented courtesy of The Porcupine's Quill, we meet a speaker who uses the lens of his converted chapel home to tell stories of his mother's cooking, his uncles' horrific wartime deaths, and the long shadow the past casts over the present.

Excerpt from The Razor's Edge by Karl Jirgens 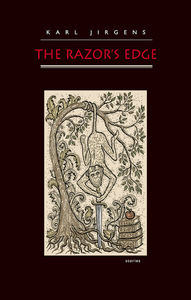 Words stagger under the weight of time, under inadequate metaphors of space. Our language asks us to look forward to the future. But for the Andean Aymara people living on the altiplano, it is reversed. The future is behind us and has always been so. Imagine you are in a boat, looking forward, drifting downstream. What is to be comes towards you. Turn about and sit facing upstream. A simple pivot. The future is now behind you. It was always there. Does direction matter? Perhaps. Some of us carry the past as if it is something behind us. Wait a moment, look, listen. You’ll see and hear how the past is always before you.

It begins at my old family home. That home was similar to the house in which I live today. My current house sits nestled on a quiet thoroughfare in a quiet town, not too far from the Golden Horseshoe, several hours’ drive from my first home in Toronto’s west end near Jane and Bloor streets. That first home had a white stucco exterior, and it was surrounded by oak trees, with the nearby Humber River leading to Lake Ontario. I remember painting the stucco each year to keep it fresh.

The little white house where I live now is different. It used to be a humble church, but it was decommissioned before I moved in. Maybe “chapel” is a better word, because the building is small. It’s considerably smaller than my former house in Toronto. This house is a rectangular bungalow with a steep roofline, steeper than expected for a small city bungalow. But the steep roof provides ample attic space, well-suited for storage. The main floor boasts an open-concept arrangement with conjoined living room and kitchenette, and there’s a bathroom and bedroom partition on the side. The basement is open and runs the full length of the bungalow. At one time, a ten-foot tall wooden steeple was perched at the front of the roof. A driveway leads to a small parking space at the back of the property, and there’s more parking on the street.

If you park on the street, then you might get a ticket, but police generally overlook cars parked in front of a church on Sundays. By the time I bought this building, the previous owner had removed the steeple. He didn’t want to attract parishioners. I drove by this little house regularly, and I remember the steeple.

Even after they decommissioned the chapel, strange things continued to happen. The former owner claimed he heard knocks at the front door, but on answering the sounds, was met only by a cool breeze. In bed, half asleep, he heard footsteps in the converted living room, creaking floor-boards, and sometimes a muffled choir. Other times he swore he heard people crying, or footsteps in the attic. After several weeks of such occurrences he became confused, couldn’t tell dream from actuality. He decided to sell.

I bought this house according to my mother’s fortune-telling. This house was in the cards. I imagined the building when it was still a chapel, pictured its floorplan. It was simple. A rectangle with rows of pews. I imagined an altar and nave near the back, not quite against the back wall, but far enough from it to muffle noises that might come from outside. It got me thinking. When they pass on, some people don’t realize it. They return to familiar haunts. Past. Future. Looking back. Looking forward.

I remember our old house. My father worked in construction and was rarely home. I went to school and did odd jobs. My mother was a bookkeeper at the Wedgewood Restaurant at Jane and Bloor, but she moonlighted as a caterer. She studied cookbooks, recipes, memorized the best and improvised the rest. She did everything by hand, dipping fingers into sauces, intuitively adding spices. I watched her work while I peeled hard-boiled eggs, potatoes, or sometimes shrimp. But it was the way she presented her buffets that drew customers.

She turned cooking into an art. No detail was too small. She crafted little penguins out of boiled eggs, with black olive heads, oval wings sliced from olive edges, triangular beaks fashioned from bits of carrot. She crafted flowers from diced radishes left overnight in spring water. Carrot trees with expanding branches were topped with bunches of curly parsley. Edible gardens. Miniature savannahs. Pickle-crocodiles patrolled the salads, their cranberry eyes lurking amidst sour cream and herring salads. Floral patterns emerged from paper-thin turnip slices she’d trimmed with pinking shears, hued with food colouring. Shavings of English cucumber imitated leaf patterns amidst faux roses, poppies, anemones and floral garnishes in a magical culinary landscape, a terra incognita waiting for discovery. She worked in a time before veganism. I sympathize; my son and many friends are now vegan, and, I have moved to a vegetarian diet as I slip towards vegan myself. But I cannot apologize for her creations which arose during an earlier time. The delightful scents seduced you. I often stood hovering over her foodscapes: maple-syrup glazed baked salmon stuffed with crab-meat, adorned with wafer-thin citrus curls; lobster thermidor with egg yolk, brandy, gruyere and hollandaise; fresh pike with minced mushroom and egg, combined with chopped onion, nutmeg, cardamom, and horseradish on the side; arctic char with smoked almond Romesco sauce, thinly sliced pan-seared almonds; fillets of trout with Bercy sauce splashed with a white-wine reduction, chopped shallots, simmered in a velouté and thickened with blonde roux; arrays of smoked eel slipping through lemon grass. The latter was de rigueur among the Balts. Many consider eels horrific, but they are celebrated by gourmets. And always, as a gesture to the olden times, gefilte fish, sweetened using beets, the old-fashioned way.

She learned how to prepare gefilte fish and other recipes in Daugavpils. Gefilte fish was popular among her Ashkenazi neighbours and friends. Daugavpils, sometimes called Niyar-Palin, or Dvinsk, one-time home of the painter Rothko, hovered near the Lithuanian border. My mother worked at a tannery there before the war.

Before she left, her brothers were sent to Siberia. Exiled. They went from all to nothing, their bodies wasting on the infamous “exquisite” diet, composed of a few calories less than required daily for a human body to remain alive. My uncles, crushed by the weight of hunger, awaited release. How my mother would’ve cooked for them! They all died. They grew ill before starving to death. Freezing temperatures. Forced labour. Subsistence food. Organ collapse. Lung or heart complications. Liver or kidney failure. Those sorts of deaths suited the warden’s goal. When reps from the Red Cross toured the camps, the coroner’s reports indicated organ failure, not starvation. This allowed them to avoid any unpleasantness involving the Geneva Convention. My uncle Peter sent letters from Taiseta, in the Irkutsk region of the Gulag. He was sent to the ice region. Others were sent to labour and die in the salt mines. My uncle, those others, shared a common fate. I saved my uncle’s letters—fragile paper triangles without envelopes. He begged for food. Garlic cloves, macaroni, rice, nuts, chocolate, beans, oatmeal, anything that might survive the postal journey to the icy barb-wired camp. We sent food packages, but they were taken by the guards. There are stories of mass graves. Three to a grave, with only one marker. It kept the numbers down. Others were lost entirely. I’ve watched videos of lines of prisoners kneeling along edges of long ditches, hands tied behind their backs. Riflemen systematically walking up to shoot them through the base of the skull. One after another. The impact of the bullets buffeting them into the ditch. Others died less pleasantly. Starvation, organ failure, ice. Lost lives. Lost futures. It’s their hands that move my pen today. Ghost hands, hungry to tell their story. A future-passed.

The Aymara people recognize the difference between what is known and not known. They think of it as a key to perception. What is known lies before you, can be experienced through eyes, ears, nose, hand. What is known is the past. The past lies before you. But the unknown, the future, lies behind you, where it can’t be seen or heard. So say the Aymara.

Some days, I feel hungry ghosts behind my back. Today, I’m on the front porch of my little white house, sitting on my old three-legged wooden stool. I call this stool my “cricket” because it squeaks when I sit on it. The street is quiet today, but I know that the ghosts are not far behind. Sometimes, they pop up in front of you. The quicker you run, the faster they chase you. The past returns to face you. But that is another story. This one is more cheerful.

Karl Jirgens is an author and editor whose books include the short story collections Strappado (Coach House Press, 1985) and A Measure of Time (Mercury Press, 1995), as well as several works of literary criticism. From 1979 to 2016, he edited and published the international journal of art, writing and theory, Rampike. He is also a grandmaster of the Korean martial art of TaeKwonDo (8th degree black belt). He lives in Windsor, Ontario.

‘Unwillingly, I’ve become part of the story. Questions lie when reconstructing incomplete facts, half-truths, enigmas. What remains is incompletion, interruption. Only the dead know what happened.’

In The Razor’s Edge, Karl Jirgens presents a collection of interlinked fictions that inhabit half-way worlds between past and present, dream and actuality, science and divination. Ordinary daily activities and events lead to unexpected slides into lucid dreams and flirtations with the edge of madness. Drawing on literature and pop culture (from Cinderella and Hamlet to Vladimir Mayakovsky and Anthony Bourdain) as well as the history of twentieth-century genocides (including the Holocaust and the Gulag), these complex, magic realist stories suggest that what seems separate is really interconnected, that the distinction between past, present and future is illusion, and that we may all die of the truth if the truth were truly known.