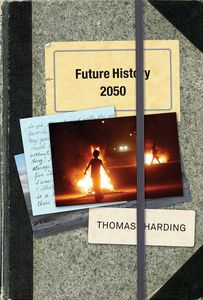 It's a normal day in a quiet converted factory in 2020, where the researcher sifts through boxes of documents. What he finds is anything but normal though: a handwritten 30-year history recorded by an unknown person named Billy. What's so very strange about that is that the 30 year period Billy is covering ranges from 2020-2050. It's history from the future, and it's catastrophic.

So opens Thomas Harding's Future History 2050 (forthcoming from Groundwood Books), a young adult novel in which the next thirty years see a world descending into climate chaos and one young person reaching backwards in time in a desperate attempt to change the future.

We're excited to present an excerpt from Future History 2050, courtesy of Groundwood Books, as part of our February focus on excerpts, offering glimpses into some of the season's most exciting books. Here we meet the researcher just as he makes his fateful discovery.

Want to keep reading? You can enter to win a copy of Future History 2050, along with two other great young adult titles from Groundwood Books, by entering our Must Read YA contest. The contest closes Sunday, February 13, so don't miss your chance.

A brief message from the researcher

Honestly, I didn’t know what to make of it.

I was in the Landesarchiv in Berlin doing research. It is an old armaments factory to the north of the city, a large red brick building with high ceilings and polished floors. On a small table in front of me were seven cardboard boxes. I had already been through three of them, finding much of interest about a Jewish family who lived in Berlin in the 1930s. It was particularly interesting as one of the boxes contained let- ters from the Gestapo.

I then opened the fourth box, and that’s when I found them. A stack of nine notebooks, each filled with handwritten notes. They were numbered 1, 2, 4, 6, 7, 9, 10, 11 and 13. The calligraphy was neat and, surprisingly, given where I was sitting, in English.

I looked more carefully and noticed several dates. On the front page of the notebook in my hand was written 2031. I flipped forward a few pages and saw the year 2033. And then, at the back, 2035.

My interest now piqued, I looked at the other notebooks. The dates ranged from 2020 at the start of one to 2050 at the back of another. Then, as I was moving through the pages, a document fell out. It was a postcard from somebody who had fled Venice after dramatic sea-level rise had flooded the city.

It was dated 2031. But how could this be? That was almost eleven years into the future.

Having spent years examining documents in windowless rooms around the world — some call me an archive rat — I am by nature skeptical. But I am also a man of reason. My training is to investigate the facts in front of me without pre-judgment or bias.

So, after a deep breath, I lifted the document for a closer look. Certainly, it appeared original, neither a copy nor a fac- simile. The postcard itself seemed authentic. The document’s wear and tear appeared real enough. The signature at the bottom, though ornate and hurried, looked original.

My heartbeat was now racing. I told myself to be calm. To be analytical. Perhaps this was someone’s effort at science fiction and it had been left here in error. But if so, surely they would have returned to the archive to collect it once they realized they had lost their precious property.

Alternatively, and more likely, this was a prank. A fellow researcher’s attempt at tricking her or his colleagues. But this, too, I quickly ruled out. Would someone really go to the trouble of writing this lengthy history as a joke? By my quick calculation the notebooks contained more than two hundred pages. Faking these documents would be an enormous and highly difficult task. And the consequences of discovery would be draconian. That left one option. That this was real.

Which was unthinkable. Absurd. Even if this was a true history written by some person in the future, how had the material found its way back to 2020? I had heard, of course, about time travel. And I’d read articles about wormholes and irregularities in the space-time continuum. But that was the stuff of novels and movies. Entertaining for sure, but nonsense to a scholar such as me. 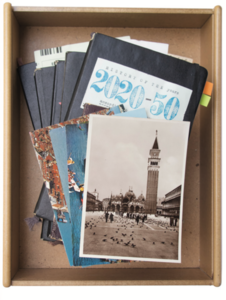 And yet, what if this was real?

I had nothing pressing to do that day. I would read these notebooks carefully, cataloging any inconsistencies or issues I found as I went along. This was the task I set myself: if by the final page I believed that the artifacts — I was, I must confess, already giving these notebooks the respect of such a name — were more likely real than not, I would have to conclude, as a professional researcher, that the notebooks were indeed a future history.

I began reading the first notebook and, to my profound surprise the more I read the more I believed. I soon noticed numerous gaps in the narrative. Entire years were missing. I also observed that the Interviewer and the Historian, if that is what they were to be called, focused on just one, or at most, two events per year. No explanation was given. 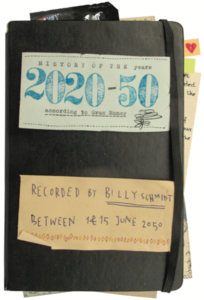 So here they are. I present these notebooks as I first found them, including the various artifacts that were slipped in between the pages, and starting with an introduction from the Interviewer. I have made no attempt to edit or redact. Best, I believe, to make available this remarkable account, including any flaws and omissions, as I first discovered it. As to its veracity, I leave it to you, dear reader, to decide.

Thomas Harding is a bestselling author whose books have been translated into more than sixteen languages. He is the author of Hanns and Rudolf, which won the JQ-Wingate Prize for Non-Fiction; The House by the Lake, which was shortlisted for the Costa Biography Award, and which was adapted into a picture book; and Blood on the Page, which won the Crime Writers’ Association Golden Dagger Award for Non-Fiction. Thomas lives in Hampshire, England.

This future history of the next thirty years, imagined by bestselling author Thomas Harding, is a compelling and startling call to action.

In 2020, a researcher is shocked to find a set of notebooks detailing the history of the next thirty years. Is this a hoax? Or could it be real?

The notebooks, written in the year 2050, contain interview transcripts between teenage Billy and Gran Nancy. We learn about the great climate SHOCK, when global temperatures rise much faster than anticipated, resulting in catastrophic consequences for humanity. We learn about a shift away from democracy, toward unelected “ethnarchs” — heads of corporations who use their access to our personal data to competently run the world. We learn about the giant city towers where most people live, work and play inside — where it's safe from natural disasters and viral outbreaks.

And between these interviews, we learn more about Billy, whose interest in the history that has been erased from the official record is causing trouble in 2050. Is it too late to change the past to save the future?