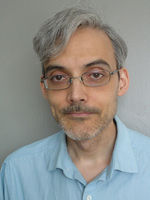 Language can be a thorny, disorienting thing at times - a kind of hedge maze of meaning where it's easy, and sometimes even pleasurable, to get lost.

This is what drives the poems in Hugh Thomas' new collection Maze (Invisible Publishing), which consists of clever, intentional mistranslations, drawing on everything from airplane safety instructions to Calvino's invisible cities.

Packaged in Invisible's trademark gorgeous design, Maze is both cerebral and playful, contemplative and cheeky, a true revel in the patterns, assumptions, and identities in language that Thomas is able to stretch and twist in fabulous ways.

We're excited to present an excerpt of five poems from Maze today, courtesy of Invisible Publishing. Kick off your weekend with a free glimpse into one of the season's most exciting collections.

Excerpt from Maze by Hugh Thomas: 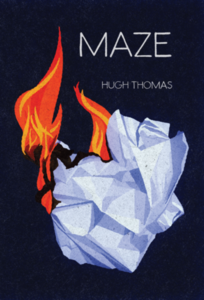 The solution is, as usual, dynamite.
You hand me the match, shooting cartoon sparks.
I light the fuse. Bang!
An explosion of confetti,
the sparkling remains of words we thought we knew,
marries us until we hit the ground
which, strangely, we never do;
suspension of disbelief supports us
further and further into Saturday morning.

Once again, poem becomes pantoum.
Everything repeats, even the moment of indecision.
Following its own footsteps, the picayune detail
reflected in a hundred mirrors
becomes part of the grand design

that you didn’t even know about until
someone came to the door selling encyclopedias,
and told you about progress,
about the course of the twentieth century.

You don’t believe him, never did
for an instant, but you think of him sometimes,
when sweeping the hard-to-reach corner of the stairwell,
all that stuff about planets,
and walking on the moon,
how long it takes to fall.

In Paris, crossing this bridge with you
and many other people over hundreds of years.
Fireworks appear in the night sky:
that great Bastille in the clouds is being stormed again,
the Marquis de Sade free to walk among the living
until dawn. He is charming and French,
he loves the young men
who throw firecrackers at each other’s feet.
You go off arm in arm with him.

Now you will have to walk all the way
to Moscow with Napoleon.
By the time you arrive it will be mid-winter,
the army starving, the mountains impassible.
I send you messengers who get lost in the snow
that covers all the blank places on the maps.
I fold paper airplanes. What were they called
before airplanes existed?
I’ll have to ask you when you crawl into bed, late,
smelling of mud and gunpowder.

The coming and going of yesterday
into the day before yesterday,
of yesterday into tomorrow—
it’s confusing. Sometimes I worry
about waking up in the wrong country,
speaking Swedish to everyone—
only, actually, it’s Norwegian.
When in a dream, speak the language of the dream.
Finland is a favourable business proposition.
Sweden is a rocky country on the Scandinavian peninsula
inhabited by figments of your imagination,
each of whom represents a fish.
Denmark—actually, I forget Denmark.
Anyway, this isn’t what I wanted to tell you about.
I wanted to tell you about Africa,
but your cheeks are pale, my beloved,
and the cold fog envelops us once again.

Excerpted from Maze by Hugh Thomas, copyright 2019. Reproduced with permission of Invisible Publishing.

Hugh Thomas' work as a mathematician takes him around the world to conferences and residencies, which has contributed to the polylingual mishmash out of which his poetry arises. Hugh has lived in Winnipeg, Toronto, Chicago, London, and Fredericton, and currently resides in Montréal, where he teaches mathematics at the Université du Québec à Montréal.

Intentional mistranslations that set a meandering path through the maze of language.

Drawing on the patterns of words, speech, and identity we encounter in the wider world—subway ads in Mexico City, a Dutch-Japanese phrase book, multilingual airplane safety instructions, one of Italo Calvino’s invisible cities—the poems in Hugh Thomas’s Maze playfully translate the maze of language into moments of amazement.