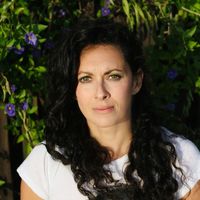 Any chance you're picturing a woman?

When "you hit like a girl" is still a common criticism, and when the default image of a fighter remains male, where does that leave the women who box, kick-box, and compete in MMA and other martial arts?

English literature instructor Alison Dean explores just this question in Seconds Out: Women and Fighting (Coach House Books). It's not just an academic query for Dean, who is herself an experienced amateur boxer. As she trained, she realized that not only was there fertile ground to explore how fighting arts can intersect with women's social identities in terms of the body, safety, and power, but that there is also an opportunity for women's involvement in these sports to change the sports themselves.

Balancing meticulous research with fascinating personal experience, Dean strips down what lies beneath our discomfort with women's strength and violence, and what makes fighting for sport such an integral part of our collective psyche.

We're excited to welcome Alison to Open Book today to talk about Seconds Out. She tells us about analyzing individual fights to break down the essential elements of combat sports, the shift from academic writing to narrative nonfiction, and how writing a memoir can be a lot like challenging a tough opponent.

The underlying question was always: What is a fighter? I was interested in exploring the ways gender plays into combat sports, but it wasn’t always central in my mind. I just wanted to think about what learning to fight means, what it takes, and what we get from it.

I imagined this book as an opportunity to travel to different gyms, become more familiar with other teams and coaches, and study a larger cross-section of fight culture close-up. Unfortunately, the COVID-19 shutdowns set in just as I was beginning to sit down and write in earnest. At the same time, I was experiencing harassment from a stalker. Between the isolation and my new, intimate awareness of a different kind of violence and vulnerability, the way I wrote the book certainly looks different than what I had planned. Instead of it being a kind of group survey, I drew a lot more on reading, conversations, and the strange “opportunity” isolation offered to have to face my own feelings and experiences.

Most of my training as a writer is university-based. I normally write about English Literature or Photography. Nonfiction and Memoir are targeted to a wider audience, but my academic training informs my take on the genre(s). I tend to take on the study of fighting (and the way I understand my own life) the same way I approach my work – I ask a lot of questions and I do a lot of research.

I drew heavily on my own training, long conversations with coaches and teammates, and interviews with other fighters and athletes. I spent a lot of time looking through combat sport-related social media and scouring online forums; reading and watching fight breakdowns (where they dissect what happened in the match); reading historical texts, old newspapers, old fighting how-to texts, sports memoirs, and contemporary articles; and listening to podcasts. I also watched a LOT of fights. Instead of taking them in passively, I had an informal fight study group with my friends. We’d each be assigned different match-ups on a fight card, for instance, and we would be responsible for studying both fighters (their past fights, their tendencies, etc.) and then coming up with a game plan for each fighter, as if we were their coaching staff. What will their strengths be in this match-up? What should they watch out for? We’d present the plan and predictions to the group before watching the fights together (virtually). I immersed myself in fight culture as much as I could while in isolation, both through media and through my own daily training exercises, and a lot of that process ended up writing itself into the book.

Denial, mostly. As I was in the thick of writing, I just pretended no one else would ever read it. I tend to be intensely private, so writing a memoir is a counter-intuitive exercise. For me, choosing memoir is kind of like picking the biggest, scariest person in the room and challenging them to a fistfight. But I figured that if I really wanted to explore what it means for people (and those who identify as women especially) to struggle and challenge themselves, then the best way to do that would be to push my own boundaries in the process. Female fighters have always embodied the struggle for equality and recognition, both in the ring and in their work to advocate for themselves and others. There’s also a long tradition of female authors writing themselves – their bodies, their insecurities, and their experiences – into their work, so in that sense, as well, it seemed significant to put myself on the line here.

I like memoirs that have a distinct voice, and blend in different ideas, histories, and experiences. I was inspired by Helen MacDonald’s H is for Hawk, which weaves together beautiful prose, personal history, and a parallel narrative that we kind of follow along with her. Other memoirs that have stayed with me include Annie Dillard’s Pilgrim at Tinker Creek, Sam Sheridan’s A Fighter’s Heart, Joan Didion’s Blue Nights, Josh Waitzkin’s The Art of Learning, Audre Lorde’s Sister Outsider, Art Spiegelman’s Maus, and Rebecca Solnit’s A Field Guide to Getting Lost. Each one invites the reader into the writer’s unique world.

Alison Dean is a lecturer in English Literature and Histories of Photography. Alison has a PhD in English from Simon Fraser University and she is an alumna of the School for Criticism & Theory at Cornell University and the Whitney Museum of Modern Art Independent Study Program. Her academic research focuses on the politics of portraiture and the portrait’s opposite – images of atrocity and torture. Alison currently trains and competes in kickboxing and boxing. She has a bad habit of dropping her left hand and her best punch is a straight right.

Seconds Out: Women and Fighting

Kicking ass and taking notes—what it’s like to be a woman in the ring.

Alison Dean teaches English literature. She also punches people. Hard. But despite several amateur fights under her belt, she knows she will never be taken as seriously as a male boxer. “You punch like a girl” still isn’t a compliment — women aren’t supposed to choose to participate in violence.

Her unique perspective as a 30-something university lecturer turned amateur fighter allows Dean to articulately and with great insight delve into the ways martial arts can change a person’s — and particularly a woman’s — relationship to their body and to the world around them, and at the same time considers the ways in which women might change martial arts.

Combining historical research, anecdotal experience, and interviews with coaches and fighters, Seconds Out explores our culture’s relationship with violence, and particularly with violence practiced by women.