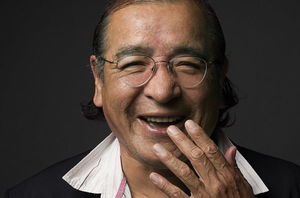 The CBC Massey Lectures series has curated some of the finest minds in the country on subjects as diverse as race, climate change, technology, and more.

For 2022, the lecture comes from no less than an icon of Canadian arts and letters, Cree artist Tomson Highway, whose brilliant, powerful work in theatre, fiction, and music has been making audiences and readers laugh, cry, and think deeply for decades.

Comparing Christian, classical, and Cree myths, he explores patterns and human nature with his signature wit and larger than life style, delving into how ancient Indigenous stories in particular can offer modern insight. Through personal stories, including loving portraits of his late father, Highway connects the individual with the collective, fearlessly showing a way forward in a world desperately in need of healing, humour, and hope.

Today we're sharing a short but exciting glimpse into Laughing with the Trickster, courtesy of House of Anansi Press. Let this brief passage pique your interest to delve into the full lecture, which is available in book form on pre-order now (publishing on September 27). As well, Highway will be in Toronto on September 23, speaking at Koerner Hall for the lecture's live series. You can see full tour dates on the Massey Lecture website.

Excerpt from Laughing with the Trickster: On Sex, Death, and Accordions by Tomson Highway: 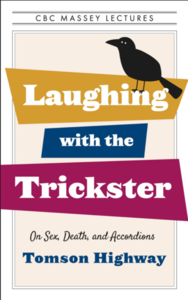 Over the years have I come to believe that, through the course of much human movement across this planet, three mythologies in particular have come to a meeting point, a kind of forum, here on our North American continent. And not only have they come to exchange information at this forum, they have changed to accommodate one another in some way, in the interests of mutual survival. They have mixed and mingled and emerged as a hybrid. And it is this hybrid of three mythologies, as I see it, that has had the most to do with giving form and substance to North American thought, life, and culture as we know it today.

The first mythology is Christian. The second is Christianity’s immediate predecessor, ancient Roman, which emerged from ancient Greek, the two constituting another hybrid, one scholars call classical mythology. And the third? North American Indigenous mythology. There isn’t, strictly speaking, just one such mythology — Canada alone has more than one hundred Indigenous languages and therefore one hundred mythologies — ​but there is enough similarity between them for us to call them another hybrid here, for simplicity’s sake.

We can understand Christian mythology because we speak English and French and any number of other languages, mostly European, that articulate this mythology, if in translation from the original Hebrew or, in the case of the New Testament, Greek. The same goes for the mythology of the ancient Greeks and Romans, because we have access to literature, if again in translation only, that expresses it. Works by Greece’s Homer and Plato and Rome’s Virgil are the least of it. But the same rule does not apply to the Indigenous languages of Canada, mostly because they were, until recently, unwritten. Most Canadians do not even know that more than one hundred Native languages once existed in this land, and although several have died, many are still very much alive. Most Canadians have never heard the Cree language in conversation. Most don’t even know that many words in everyday usage​ — ​such as Saskatoon, Saskatchewan, Winnipeg, Manitoba, Chicoutimi, Quebec, and Ottawa — ​are Cree. And if they do, they don’t know their meaning.

Excerpt from Laughing with the Trickster: On Sex, Death, and Accordions by Tomson Highway. Published by House of Anansi Press. Copyright Tomson Highway, 2022. Reprinted with permission.

Tomson Highway is a Cree author, playwright, and musician. His memoir, Permanent Astonishment, won the 2021 Hilary Weston Writers’ Trust Prize for Nonfiction. He also wrote the plays The Rez Sisters and Dry Lips Oughta Move to Kapuskasing, and the bestselling novel Kiss of the Fur Queen. He is a member of the Barren Lands First Nation and lives in Gatineau, Quebec.

Laughing with the Trickster: On Sex, Death, and Accordions

Brilliant, jubilant insights into the glory and anguish of life from one of the world’s most treasured Indigenous creators.

Trickster is zany, ridiculous. The ultimate, over-the-top, madcap lunatic. Here to remind us that the reason for existence is to have one blast of a time and to laugh ourselves to death.

Laugh with the legendary Tomson Highway as he illuminates a healing, hilarious way forward.