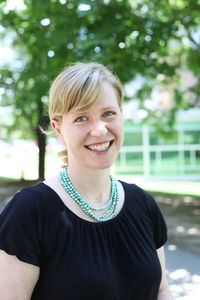 Williams Syndrome is a complicated and little-known condition with symptoms including difficulties with visual and spatial tasks, outgoing, empathetic personalities, and numerous health concerns including cardiovascular issues. When Henry Robinson's daughter Starr is born with the condition in Claire Tacon's In Search of the Perfect Singing Flamingo (Wolsak & Wynn), he decides to do absolutely everything he can to make her life as happy as possible.

Two decades pass, and we find Henry working at Frankie's Funhouse, taking care of the animatronic band Starr adores. But all is not perfect: Henry's wife feels Starr needs more independence, and longs for Henry to lavish the same love he shows for Starr on her and their other daughter, Melanie. Meanwhile, Henry's young colleague Darren convinces Henry to accompany him on a road trip to Comic Con. Henry won't go without Starr, and Starr won't go without her pet turtles. The resulting road novel is a complex, tender, witty, and thoughtful story about family bonds, identity, and learning to stand up to and love the world all at once. Author Michael Christie called the book "hilarious and humane, uproarious and unpredictable".

We're excited to welcome Claire to Open Book as part of our Dirty Dozen series, where we challenge authors to share 12 unexpected facts about themselves. She tells us about the magic of late '90s internet cafés, her badass grandmother's sex education campaign, and makes us want to hire her as a Guelph tour guide.

1. When I was in undergrad, two of the Spanish profs were feuding. One hated ABBA and her office was right next to my classroom. The other prof set memorizing Mama Mia, Chiquitita, and Gracias Por La Música as part of the final exam. We spent many class hours listening to them on repeat. I will probably die humming them.

2. Currently looking for someone to go lake swimming with. Must not be put off by algae bloom.

3. Hired to teach “street smarts” at summer camps when I was 19. Failed miserably.

4. Moved on to being a barista at a cybercafé where patrons would email their orders and a computer would bing loudly until you delivered their drink. Exciting stuff in 1998.

5. My father once bought one hundred individually-portioned frozen Shepherd’s pies because the sale was so good. When he brought them home and tried them, we discovered why they had been so deeply discounted.

6. I seem to have inherited my dad’s sense of quantity and constantly worry when baking that I should actually be tripling or quadrupling the recipe. Because, what if people leave hungry?

7. My second book, In Search of the Perfect Singing Flamingo, has a character in it with Williams syndrome. Because it’s a rare chromosomal condition, awareness is still a big part of advocacy in the community. If you’ve got two minutes, check out the Canadian Association for Williams Syndrome’s website and newsletter. I’d also encourage you to follow some Canadian disability advocates like Sarah Jama, Dorothy Ellen Palmer and Maayan Ziv, who are working towards a more accessible and inclusive society.

8. Am learning to sew my own clothes. There are some amazing, quietly radical online sewing communities.

9. There are some incredible women in my family. My great-grandmother sent away for birth control information in Depression-era Kapuskasing and then started educating local women. A town priest tried to intervene but what could he really say to a woman who’d given birth to eight children, four of whom she’d had to bury, and was now done with procreating?

10. On a much lighter note, if you take your children to McDonald’s because they are screaming and it is still a long way home, and then one of their unopened milks rolls under the seat, and you don’t notice it for a month until the pent-up gases have popped the seal and your car becomes a wall of smell, you can go to the pet food store, buy aquarium filter carbon and pour it into the legs of an old pair of nylons, snip them off at the crotch and tie them so the ends look like spent condoms, then douse your car with vinegar, toss the nylon sausages under the passenger seat and, within a week, you car will smell normal again.

12. I love being an ambassador to Guelph. It’s a great city! Hillside is the most fun you’ll have at a music festival—craft beer, lakeside venue and volunteers that greet you saying “Happy Hillside!” (it’s a bit Harry Potter-ish). Not to mention the city’s jazz, contemporary dance and film festivals and the Eden Mills Writers’ Festival down the road. Also, a ton of splash pads, mushroom growing workshops, a wonderful independent bookstore and cinema, and a huge network of bike trails. You should probably move here.

Claire Tacon's first novel, In the Field, was the winner of the 2010 Metcalf-Rooke Award. Her fiction has been shortlisted for the Bronwen Wallace Award, the CBC Literary Prizes and the Playboy College Fiction Contest, and has appeared in journals and anthologies such as the New Quarterly, SubTerrain and Best Canadian Short Stories. She has an MFA in creative writing from the University of British Columbia and is a past fiction editor of PRISM international. Claire is a lecturer at St. Jerome's University and runs the fiction podcast The Oddments Tray with Chioke I'Anson

In Search of the Perfect Singing Flamingo

When Henry Robinson’s daughter Starr is born with Williams Syndrome, he swears to devote his life to making her happy. More than twenty years later, Henry works at Frankie's Funhouse, where he repairs the animatronic band that Starr loves, wrestling with her attempts at living outside the family home. His wife wishes he would allow Starr more independence and turn his attention a little more to their own relationship and their other daughter, Melanie. As tensions mount Henry’s young coworker, Darren, reveals he needs to get to Chicago Comic Con to win back his ex-girlfriend, so Henry packs Starr (and her pet turtles) and Darren (still dressed as Frankie the mascot) into the van for a road trip no one was prepared for.

Told in multiple points of view, we hear from Henry, Darren and Starr as they all try to find their place in the world. In Search of the Perfect Singing Flamingo is a charming, tender and often funny story of a father struggling to let his daughters grow up and of a family struggling against hard odds, taking care of each other when the world lets them down.