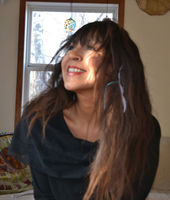 Carol Rose Daniels' newest poetry collection, Hiaerth (Inanna Publications), mines a particularly painful period in Canadian history: the so-called '60s Scoop, where upwards of 20,000 indigenous children were removed from their homes and families and either adopted by settler families or placed into the foster system. It's a generational trauma with far-reaching effects for many of the children, now adults, who were taken from their families, and their children.

Daniels, a Cree/Dene woman, creates poems here exploring belonging, identity, and the haunting nature of her early separation from her culture. Hiaerth has a difficult subject, but is shaped by hopefulness and strength, in particular the strength of women coming together to support one another and heal. The title is a Celtic word that refers to looking for a place that never existed. In the collection, Daniels and her readers discover that place as an interior destination rather than an exterior one.

Lisa Bird-Wilson, author of Just Pretending, had this to say about the collection: "Hiraeth offers a generous, genuine, heartbreaking gift. Loving, defiant, dark, and triumphant, Carol Rose Daniels sings our homesick spirits out of harm's way. This collection is for all of us, but most especially for those taken, those found, and those still searching. Our nations need this book now more than ever. kinanaskomitin."

Today we get to know Carol through our Dirty Dozen series, where she shares some incredible stories with us. Read on to hear about her genius snack combinations, her teabag beauty trick (which we will be test driving!), and her sky-high plans for summer.

Carol Rose Daniels is Cree/Dene with roots in Sandy Bay, northern Saskatchewan. She is a published novelist, poet, playwright, visual artist, and musician. She is the author of the award-winning novel Bearskin Diary (2015). A second novel, Narrows of Fear, is forthcoming in 2018. As a visual artist, her work has been exhibited in art galleries across Saskatchewan and Northern Canada. As a musician, a CD of women’s drum songs, in which Carol is featured, was recently nominated for a Prairie Music Award. Before pursuing her art on a full-time basis, Carol worked as a journalist for more than 30 years in television and radio at APTN, CTV, and CBC. She lives in Regina.

Hiraeth is about women supporting and lending strength and clarity to other women so they know that moving forward is always possible— and always necessary. It documents a journey of struggle that pertains to a dark point in Canadian history that few talk about and of which even fewer seem aware. Poems speak to the 1960's "scoop up" of children and how this affected the lives of (one or thousands) of First Nations and Métis girls— girls who later grew to be women with questions, women with wounds, women who felt like they had no place to call home. That is, until they allowed themselves to be open to the courage others have lived and shared. "Hiraeth" is a word that is Celtic in origin and it means looking for a place to belong that never existed. But this place does exist — in the heart.