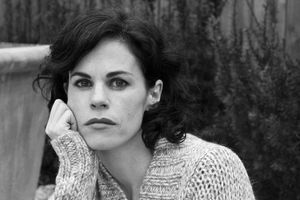 Nicole Lundrigan's first five novels secured her reputation as an acclaimed, creative, and clever writer telling captivating stories in beautiful language. Her newest book, The Substitute (House of Anansi), will thrill both Lundrigan's existing fans and new readers, showcasing a writer at the top of her game.

In The Substitute, a soft-spoken, cerebral middle school science teacher befriends one of his new students. The friendship is innocent, but when the young student is found dead in his backyard, the town turns on the teacher, convinced of a darker narrative.

The events are described not by the teacher alone, however, but also by an unnamed narrator, keenly intelligent but speaking with a disturbing emotional detachment. Creepy and brilliant, rendered in Lundrigan's tight and elegant prose, it's a page-turning glimpse directly into the mind of a psychopath.

We're excited to welcome Nicole to Open Book today to take our Dirty Dozen challenge, where we ask authors to share 12 unexpected facts about themselves. She tells us about autopsies and skeletons, a romantic gesture following a book event, and why you want her on your tetherball team.

Nicole Lundrigan is the author of five critically acclaimed novels, including Glass Boys and The Widow Tree. Her work has appeared on best of the year selections of the Globe and Mail and NOW Magazine and she has been longlisted for the ReLit Award. Born in Ottawa and raised in Newfoundland, she now lives in Toronto.

Warren Botts is a disillusioned Ph.D., taking a break from his lab to teach middle-school science. Gentle, soft-spoken, and lonely, he innocently befriends Amanda, one of his students. But one morning, Amanda is found dead in his backyard, and Warren, shocked, flees the scene.

As the small community slowly turns against him, an anonymous narrator, a person of extreme intelligence and emotional detachment, offers insight into events past and present. As the tension builds, we gain an intimate understanding of the power of secrets, illusions, and memories.

Nicole Lundrigan uses her prodigious talent to deliciously creepy effect, producing a finely crafted page-turner and a chilling look into the mind of a psychopath.