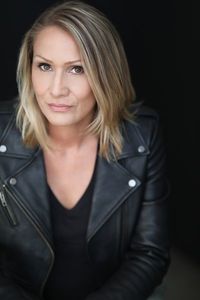 Filmmaker Jules Arita Koostachin has developed a reputation for moving, incisive, emotionally sophisticated storytelling in her films and television work. So it's no surprise that her debut poetry collection, Unearthing Secrets, Gathering Truths (Kegedonce Press), brings those same strengths to the page.

Unearthing Secrets, Gathering Truths looks the complex and sometimes traumatic past squarely in the face, seeking healing and understanding. Highlighting the journey, voice, and truths of an Indigenous woman, the collection reveals Koostachin's strength and resilience while displaying her technical skill and innovative formal experimentation.

As both a mother and a daughter, Koostachin shares her mitewin - her dreams - with the reader in these courageous, challenging poems that expose the personal legacy of Canada's appalling actions towards Indigenous people.

We're thrilled to welcome Jules to Open Book today. We have the pleasure of getting to know her through our Dirty Dozen series, where we ask authors to share 12 unexpected facts about themselves. Jules tells us about a formative fourth grade theatre run, the tattoo artist road not taken, and taking Taekwondo while pregnant with twins.

1. In grade four I wrote, produced and directed my first play – can’t remember what it was called, but the play was based on an idea I had when I was playing with my dolls. I also don’t remember the premise of the story either, but I what I do remember is that I arranged it so that we had a public presentation in the school library.

2. As a child I was told that I had a learning disability, but I believe I was misdiagnosed because I lived with severe hearing loss until I had corrective surgery at sixteen years old. My hearing loss made it hard to stay engaged and focused in the classroom, so I spent a lot of time lost in my imagination. In addition, our family experienced racism, and we were living in poverty, which also led to the lack of support from my school.

3. I have over thirty journals! I started journaling when I was ten years old, it helped me sort out my thoughts. I still have them; they are packed away and I haven’t had the courage to re-read them.

4. After my high school graduation, I was offered a job as a tattoo artist, as well as the lead in a play. I decided to go to university and study theatre.

5. My undergrad degree is in Theatre from Concordia University and during that time I produced a play called Earth Whispers and we donated the funds we raised to a local Native women shelter.

6. When I was pregnant with my first son Asivak at 22 years old, I was directing my play called White Spider Womyn and I went into labour mid-run. My cast came to visit me in the hospital and I was still working with a new baby in my arms.

7. When I was pregnant with my second son Mahiigan, we lived over a nightclub in Toronto. I went into labour in the middle of the night and my mom called 911. I was lying on the living room floor when the police, fire fighters, and ambulance attendants arrived on site. Because we had no elevator and we lived on the fourth floor, they had to tie me to a chair to carry me downstairs to the ambulance, but of course we had to walk past a bunch of young people lining up for the nightclub.

8. At one time we had four generations (my Cree grandparents who did not speak English, my mother, myself, and my two eldest boys) all living under one roof and it was amazing!

9. I got my red belt in Taekwondo when I was four months pregnant with my twin boys Tapwewin and Pawaken.

10. I was nervous about going back to school with four children at home. I started my Masters in Documentary Media at Ryerson anyway and upon graduation I received a Gold Medal and an Award of Distinction for my thesis, which I submitted in Cree syllabics. It was a proud moment because I worked very hard!

11. I am the biggest film nerd ever! I am currently working on my PhD – Indigenous documentary with the Institute of Gender, Race, Sexuality, and Social Justice at UBC.

12. I started writing my first book of poetry Unearthing Secrets, Gathering Truths when I was nineteen years old – that was over twenty-seven years ago! We are launching it in September 2018. Although it took so long, I am so grateful to finally share it with my community.

Born in Moose Factory Ontario, Jules Arita Koostachin was raised by her Cree-speaking grandparents in Moosonee, and also with her mother in Ottawa. Her mother is a survivor of the Canadian Residential school system. Jules is a band member of Attawapiskat First Nation, Moshkekowok territory, and she currently resides in Vancouver. She is a PhD candidate with the Institute of Gender, Race, Sexuality, and Social Justice with the University of British Columbia – her research focus is Indigenous documentary. Jules’ television series AskiBOYZ (2016), co-produced with Big Soul Production, is about two urban Cree youth reconnecting with the land. AskiBOYZ is currently being aired on Aboriginal Peoples Television Network. In 2017, she released her short documentary NiiSoTeWak with CBC Short Docs and also Butterfly Monument with her co-director/producer Rick Miller. Jules was also the 2017 Aboriginal Storyteller in Residence with the Vancouver Public Library. She is lead editor and contributor of a forthcoming collection entitled Children of Survivors with the University of Regina Press. Unearthing Secrets, Gathering Truths is her first book of poetry, and was a twenty year journey.

To unearth our secrets means we must face our past, and in doing so, we will find our voice.

Unearthing Secrets, Gathering Truths delves into the life and the healing of an lnnininew woman from the ancestral lands of the Moshkekowok, now called Northern Ontario. It is through the process of writing broken poetry--visual poetry rooted in the haunting memories of her childhood--that she provides the reader a glimpse into the mind of child survivor who was saved by her ancestors. This thought provoking poetry sheds light on a personal account of how she comes to terms with intergenerational trauma inflicted by the residential school system.

Unearthing Secrets, Gathering Truths explores the heartfelt and evocative fragmented experiences through the eyes of an Indigenous woman. Through the honesty of her words, she embraces the spirit world, the resilience of her foremothers, the integral healing powers of disassociation as a survival mechanism, and the richness of her mitewin--dreams--which reconnects her to herself. Through her poetry, she has found the courage to face her difficult past, and now as a mother, she is gathering the truths of her family to help in the healing process.