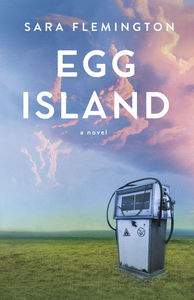 Most kids had a daydream at some point about heading out on their own, finding a new and better home, preferably with a cool friend along for the adventure. But for Julia, the wary teenage lead in debut novelist Sara Flemington's Egg Island (Rare Machines/Dundurn Press), the adventure becomes real when she walks into a gas station – and out the back with the teenage attendant, into a stolen car, and onto the road that hopefully leads to the mysterious Egg Island, a semi-mythical locale where, according to whispers, the sky breaks open to reveal what Julia and her new friend need most: home.

Part road story, part buddy dramedy, Egg Island is a genre-defying, utterly absorbing tale of two forgotten and overlooked teens finding each other and something like hope. As the two bruised and unlucky teens find themselves slowly and gently reborn alongside each other, Flemington deftly explores the meaning of home and luck, rumour and truth. Through it all, the titular island shimmers as a mystery both thematic and literal, its uneasy fantastical quality complicating the story in brilliant ways both formally and narratively.

Egg Island is a book that resists the expected and delights in surprise. What's more, it signals the arrival of a new CanLit talent, and we're excited to celebrate its publication by inviting Sara to take our Dirty Dozen challenge, where we ask writers to share 12 unexpected facts about themselves. She invites us behind the scenes of her life both writerly and personal, telling us about her very relatable TV habits, her most essential piece of travel advice, and the famous poem she's got inked on her skin.

The Dirty Dozen with Sara Flemington: 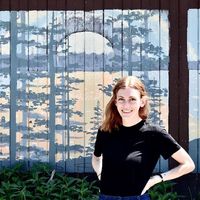 I once crowd surfed with Iggy Pop at a Stooges concert and I will never stop talking about it.

2. I have some *minor* issues with parasomnia.

3. I’m a shameless TV junkie. Classic sitcoms, nature documentaries, and reality shows are my favourite. I’m currently watching my way through the entirety of Keeping up with the Kardashians.

4. I took up running at eighteen and never looked back. It’s the best therapy (next to nature docs, of course).

5. I’m a very shy person who has secretly always wanted to be a performer. I love reading plays, and really enjoyed drama and acting classes throughout school. I can’t tell you what I did on the weekend come Monday, but I’m really good at memorizing monologues, for some reason.

6. Speaking of memorizing, I was super into Shel Silverstein as a kid, and can still, to this day, recite many poems from Where the Sidewalk Ends. Not saying I was the coolest kid.

7. I played tuba in high school and was actually pretty passionate about it. Again, not saying I was  cool.

8. Another thing—for some reason, I need to pretend I’m holding a pen in order to identify left or right. A mirror image requires me to mentally (and sometimes even physically) turn my body around, and then do the pen thing, in order to figure it out. Perhaps this is why I’ve had a hard time getting my driver’s license?

9. I kill all plants. I can’t keep a cactus alive, yet somehow, I have two stalks of bamboo in a glass milk bottle that have managed to live for seventeen years. New leaves continue to grow.

10. I collect postcards from everywhere I go, and they cover the wall opposite my bed. It’s probably pretty tacky-looking, at my age, to have postcards stuck all over a bedroom wall, but I love waking up and seeing where my eyes, and memory, will land first—Angkor Watt, San Francisco, the Rockies, Madrid.

11. On the subject—if you can, travel alone at least once.

I have a hand-poked tattoo on my (pause) left hand. It’s a poem by E.E. Cummings called “l(a,” and because I was a server when I had it done, and therefore could not avoid washing my hands, it now looks more like smudged ink, as if I were taking sloppy notes with a runny pen. I’m constantly being asked, ‘What’s that stuff on your hand?’ That’s the answer. It’s a tattoo.

Sara Flemington’s stories have appeared in several journals, including subTerrain, The Humber Literary Review, and The Feathertale Review. Egg Island is her first novel. Sara lives in Toronto.