In Shawna Lemay's Everything Affects Everyone (Palimpsest Press), Xaviere is left a strange gift when her dear friend Daphne passes away and, in her will, requests that Xaviere transcribe a series of interviews she had recorded before her death.

On the tapes, Xaviere finds Daphne in conversation with the elusive photographer Irene Guernsey, who has never before spoken about her work publicly. As Xaviere listens and writes, she is stunned to discover the strange magic behind Guernsey's captivating images. Soon Xaviere is questioning everything, with Guernsey's revelation that she has spent her life searching for angels seeming utterly impossible. But strange things are happening in Xaviere's life, and becoming clear in the past as well, and in the lives of other women she knows, which make the impossible suddenly feel much closer than it ever has.

Everything Affects Everyone is a taut, thoughtful novel about listening and being seen, about how women share and protect secrets, and about the nature of belief in all forms. It's a spectacular addition to Lemay's prestigious writing career, which includes the beloved Rumi and the Red Handbag, The Flower Can Always Be Changing, and Calm Things.

We're excited to welcome Shawna to Open Book today as she takes on our Dirty Dozen challenge, where we ask writers to let readers come behind the scenes and learn something unexpected about our guest authors.

Shawna took up the challenge with wit and feeling, telling us about the anxiety of fantasy dinner parties, the collector's item she treasures that would inspire envy in many a hockey fan, and an important – and freeing – two-word mantra that calls to mind a certain scrivener from Melville.

The Dirty Dozen with Shawna Lemay: 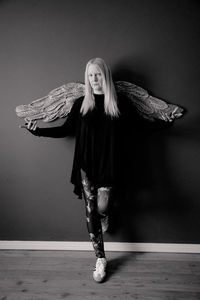 1. I’m always wondering if there’s another way to do things but usually, I leave well enough alone. With this list, for example, I’ll wonder if it would have been better if there were just three things, or maybe 17. Should I try to make myself look cool with my answers, or mysterious, or wild, or eccentric? Should I lie or just be honest?

2. I’m sometimes incredibly vain about having sectoral heterochromia, at other times completely blasé. Once someone said my sectoral eye reminded them of a photograph of the earth from space. As a child I was called a witch. It’s more usual that my heterochromia goes unnoticed.

3. The first thing I’d buy if I won a million dollars is a 1969 Mercury Cougar in cerulean blue which is a car I owned in my early 20s.

4. I’m always marginally horrified by that question: If you could have dinner with X number of people living or dead, who would you choose? What if this conjures or summons or disturbs the dead, and what if somehow it came to pass? Would I have to cook? I’m a terrible cook! Is it at a fancy restaurant? Which fork do I use for which course? It’s like when you apply for a job and you immediately imagine yourself in the position. But I just can’t enjoy that fantasy.

5. For most of my life I’d been convinced I would die young. It was a real turning point for me when I realized I’m no longer young.

6. When I was in pre-school, there was a field trip to the legislature building. Each child stood in line to be held at the waist by a random adult, and stood up on the railing under the dome, so we could look down. I, a tall child, did not want this honour, but was made to perch regardless. I trace my extreme fear of heights to this moment.

7. I do and do not believe in past lives.

8. There was a brief moment when I was in high school when I wanted to play hockey on a woman’s team, which was quite a new thing at that time. This never transpired but I’ve always dreamed that had I pursued this, I would have been a decent player.

11. I have ideas for the next four books I want to write.

12. When I waited on tables in my early 20s, I would sometimes say, “I refuse” when a particularly difficult or needlessly demanding party came into the café. I was mocked a little for this, but another waiter would always step in for the tips. The thing is, you reach a point where “I refuse” is the best response. I’ve quit a couple of jobs when the phrase has popped into my head. I know I’m in the wrong place when I hear “I refuse” in my head. It’s a good phrase to hold onto.

Learn more about Shawna and Everything Affects Everyone at the Palimpsest Press website.

Shawna Lemay is the author of the novel, Rumi and the Red Handbag, which has made Harper’s Bazaar’s #THELIST (must-reads for Fall 2015), the “Most Anticipated” list on the popular Canadian book website, 49th Shelf, and has been selected for Maria Shriver’s fall reading club. Nathalie Atkinson chose Rumi and the Red Handbag for Fall’s Must-Read Fashion Books in the Globe and Mail.

She has also written six books of poetry, a book of essays, and an experimental novel titled, Hive, which is about the possibility of the existence of a woman art forger. All the God-Sized Fruit, her first book, won the Stephan G. Stephansson Award and the Gerald Lampert Memorial Award. Calm Things: Essays was shortlisted for the Wilfred Eggleston Award for Non-Fiction. She has an M.A. in English from the University of Alberta.

Do you believe in angels?

When Xaviere is tasked with transcribing taped interviews her deceased friend Daphne left to her in her will, she begins to piece together the story of the photographer Irene Guernsey, a moderately well known but elusive photographer Daphne was interviewing. Irene’s mysterious images captivate Xaviere as they had Daphne. Irene had never given interviews or talked about her work publicly, but near the end of her life, she reveals the magic hidden in plain sight in her mysterious and ethereal photographs and her attempt to capture angel wings on film. And once the angels appear, the reader is taken on a journey that spans decades and changes the lives of multiple women along the way.

Everything Affects Everyone, is a novel about listening, about how women speak to one another, and about the power of the question.